How I helped Jon Stewart get one of his Noah facts wrong April 9, 2014 Peter T. Chattaway 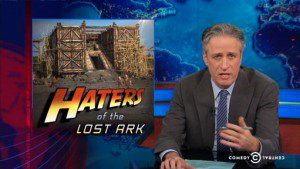 Of all the controversies that have swirled around Darren Aronofsky’s Noah, by far the dumbest is the one that erupted over the claim that the dialogue in this film never uses the word “God”.

Last night Jon Stewart tackled this subject in a segment called ‘Haters of the Lost Ark’. And along the way, he repeated a claim that I and others have made in the film’s defense — a claim that, I’m afraid, might have been mistaken.

Here’s the timeline, as best as I can piece it together:

February 27: While watching the film, I scribble the following in my notes: “Ham: ‘My father says there can be no king. The Creator is God.'” I draw a squiggly line beneath the last few words to signify that I’m not 100% sure about that bit; I often do this as my fingers race to catch up with a line as my memory of it begins to fade.

March 21: The controversy begins, and I respond on Twitter. I am immediately backed up by my friend Steven D. Greydanus, who jotted the same sentence down in his own notes when he saw the film a week or so after I did:

@ptchat "My father says there can be no king. The Creator is God." Word for word what I have in my notes. @THR @bighollywood @ToddMcCarthy

March 23: Emboldened by Steve’s back-up, I devote an entire blog post to the controversy, titled ‘Is “God” missing from Darren Aronofsky’s Noah? Please.’ In that post, I list six different reasons why the controversy is a silly one, of which my recollection that the film does mention the word “God” is just one.

March 26: I see the film a second time, and I notice what seems to be an extra word or syllable in that line of dialogue. I wonder if Ham might actually be saying, “My father says there can be no king, and the Creator is God.”

March 27: Steve addresses the controversy himself in a post at the National Catholic Register, titled ‘The ‘Noah’ Movie Controversies: Questions and Answers’.

March 28: NBC News runs a story on the film that quotes Steve on this subject (and links to one of my blog posts on a separate issue related to the movie):

Is the word God missing from the film as some critics have charged?

No, says Greydanus. “For the most part, God is referred to in the film as ‘the Creator’ and this is a creative choice that I think does a lot for the film. It helps to defamiliarize the language somewhat, it makes the figure of God a little more mysterious to us.” But His name is clearly spoken when Ham, second son of Noah, says to Tubal-cain: “My father says there can be no king. The Creator is God.”

March 29: I begin to hear from people who saw the film and heard Ham say, “My father says there can be no king in the Creator’s garden.” It occurs to me that this would fit perfectly with an essay that Aronofsky wrote two days earlier on the theme of dominion vs. stewardship in the Genesis story, and in his film. I update my post to allow for the possibility that this might be the actual line of dialogue.

April 8: Jon Stewart addresses the controversy on The Daily Show (Canadian link), and quotes Steve’s quote from the NBC News story along the way:

By now however, Steve, who saw the film again over the weekend, has come to believe that “in the Creator’s garden” is the more accurate rendition of the line in question, and he has updated his post at the National Catholic Register accordingly:

Correction: This article originally stated that while God is usually called “the Creator,” “the Creator actually is referred to as ‘God’ at least once, when Ham tells Tubal-cain, ‘My father says there can be no king; the Creator is God.’” That’s how I and a number of others heard the line in question in screenings while sound levels were still being tweaked; however, after watching Noah again recently, I now believe we misheard the line. The correct line, I believe, is “My father says there can be no king in the Creator’s garden.” I regret this error, though the larger point remains that there are good reasons for the film’s usage of “the Creator,” and the whole controversy is a silly one. —SDG

Given how the opposition of “king” with “the Creator’s garden” fits so well with the theme of “dominion” versus “stewardship”, I am inclined to believe that Steve and the others who have heard “in the Creator’s garden” are correct. But I will definitely be watching this scene with the subtitles on when the DVD comes out. (I suppose I could also track down a copy of the novelization and see what it says in there.)

In any case, the fact remains that the controversy here is utterly silly, for all the other reasons that Jon and Steve and I have articulated. In a period piece like this where the characters say a woman is “with child” rather than “pregnant”, it only makes sense that they would use similarly different terms for God, etc., than we do.

Update: John Snowden, the film’s biblical advisor, confirms that Ham says “garden” rather than “God”. But I’m still going to check the DVD, just to be absolutely sure.

April 11, 2014 On asking questions, not assuming answers, about Noah
Recent Comments
2 Comments | Leave a Comment
"This was a refreshing read. I'm an average fan of Hellboy but I'm also a ..."
Andrew Mathews Doug Jones on Hellboy and Christianity.
"Great interview! One thing I've wondered since watching Season 1 is why they didn't include ..."
A.J. Cattapan Interview: The Chosen writer-director Dallas Jenkins ..."
"Earth actually does exist in the Dark City universe. Early in the film when John ..."
Edward Clint Dark City and the ambiguous ending.
"I don't always agree with your opinions, but your reviews are never less than interesting ..."
Laura-Lee Rahn The top-grossing Italian movie of 2019: ..."
Browse Our Archives
get the latest from
FilmChat
Sign up for our newsletter
POPULAR AT PATHEOS Entertainment
1