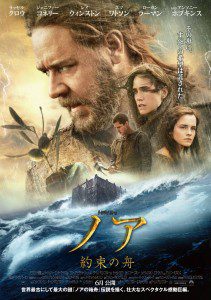 Last week, there was a lot of noise about a small group of “faith-driven consumers” slamming Darren Aronofsky’s Noah even though none of them had seen the film. This week, Christians who have seen the film have started to come out in its defense, sort of.

The Blaze reports that the National Religious Broadcasters hosted a panel on the film at their media convention on Sunday night, and three men who have seen the film took part in the discussion: NRB chief Jerry Johnson, media consultant Phil Cooke and former youth minister John Snowden, who has served as the film’s biblical advisor since April 2012.

From the sound of it, all three men were clear that they didn’t endorse every single detail in the film, but they didn’t want to throw the baby out with the bathwater.

Johnson, it seems, was the most critical of the three, partly because the film expresses a form of evolutionary creationism and partly because Noah, who questions whether humanity ought to be saved at all, comes across as a little “crazy”.

However, Johnson did acknowledge that the film “takes sin very seriously”.* And, not surprisingly, he urged evangelicals to keep their criticisms in check, not so that they could engage with the film’s deeper themes, but so that they can use the film as a witnessing tool: “Why don’t we turn it into something evangelistic?”

Snowden, on the other hand, distributed a treatise entitled ‘Why People of Faith Can Embrace Noah’, which has since been published by The Christian Post. (Beware: he reveals, or at least hints at, one or two plot points that are kind of spoiler-ish.)

Snowden offers ten basic points for curious Christian viewers to keep in mind, and based on what I’ve seen and read so far, I agree with just about all of them.

I also find myself thinking that item #4 on his list — “It Keeps Closer to More of the Text Than You Might Have Imagined” — is reminiscent of an article that Robert Davis wrote for Paste magazine prior to the release of the first Sherlock Holmes (2009) starring Robert Downey Jr., in which he wrote that “not everything in the trailer that’s causing some people to roll their eyes is a whole-cloth invention.” Sometimes people have an image of a character in their minds that is influenced as much by other people’s interpretations of the text as it is by the text itself — so when they come across an unconventional interpretation that is, itself, rooted in the original text, they reflexively mistake their image of the character for the original thing.

Anyway, if you don’t mind a possible spoiler or two, Snowden’s article is worth a read.

Incidentally, the image above is a new poster for the film that was released in Japan. It’s very similar to the international posters I rounded up here and here, but it also seems to depict a plant of some sort that was missing from the other posters.

Also, Entertainment Weekly has a new article on the film that begins with an anecdote from the set but focuses mostly on the controversies that have already been covered in my previous posts. The article does come with a new photo or two, though: 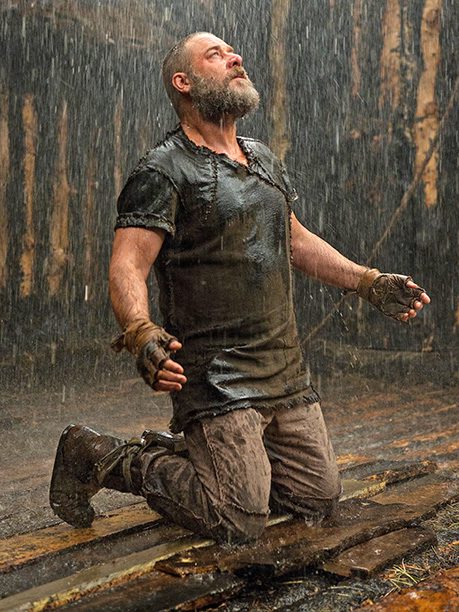 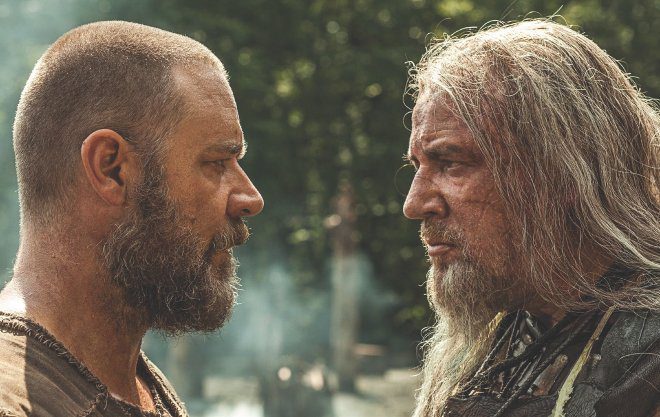 * One of the more bizarre claims made by Chris Stone, the guy who heads the “faith-driven consumer” movement — and who, lest we forget, hasn’t even seen the film — is that the film “take[s] the sin element out” of the story. Uh, really? Then why does he think God is sending the Flood? Why does he think that Noah questions whether humanity deserves to survive, to the point where people like Johnson find the character a little “crazy”? I would also dispute his claim that “the central part of Christianity” is that “man is inherently evil”; we’re fallen, yes, but that’s not the first or most important thing about us, and anyway, shouldn’t the central tenet of our faith have something to do with, oh, I dunno, God? And that’s before we get to the fact that the Noah story is just as much a Jewish story as it is a Christian one.

February 26, 2014
How do we define "wickedness" in biblical films?
Next Post

February 27, 2014 New pictures, music, and a dialogue clip at the Noah website
Recent Comments
0 | Leave a Comment
"This was a refreshing read. I'm an average fan of Hellboy but I'm also a ..."
Andrew Mathews Doug Jones on Hellboy and Christianity.
"Great interview! One thing I've wondered since watching Season 1 is why they didn't include ..."
A.J. Cattapan Interview: The Chosen writer-director Dallas Jenkins ..."
"Earth actually does exist in the Dark City universe. Early in the film when John ..."
Edward Clint Dark City and the ambiguous ending.
"I don't always agree with your opinions, but your reviews are never less than interesting ..."
Laura-Lee Rahn The top-grossing Italian movie of 2019: ..."
Browse Our Archives
Follow Us!