The Pasolini-directed movie about St Paul that never was 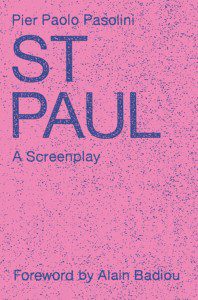 So many movies have been made about Jesus, and so many of those movies have been mediocre, that it’s sometimes surprising to realize how many world-class directors have tried to get Jesus movies of their own off the ground but never succeeded. The list includes Carl Theodor Dreyer, who passed away in 1968; Gillo Pontecorvo, who passed away in 2006; and Paul Verhoeven, who published a book about Jesus in 2008 and has talked about making a movie on the subject since the 1980s, but is no closer to actually getting the film made now than he was back then.

You don’t often hear about people dying to make movies about Saint Paul, though. But it turns out that one of the best Jesus-movie makers of them all — Pier Paolo Pasolini, director of The Gospel According to St Matthew, which incidentally celebrates its 50th anniversary this year — tried to make a movie about the apostle who took Christianity to the Gentiles, and yesterday his screenplay was published in English for the first time ever.

A blurb on the Verso Books website says Pasolini, who died in 1975, began writing his script for St Paul after the 1968 release of Teorama, but it never got made because it was deemed too risky for investors. Why was it deemed too risky? Partly because Pasolini planned to set the story in modern-day Europe and New York, drawing parallels between the political situation of Paul’s day and the political situation of our own. A film like this would have posed a far greater marketing challenge than Pasolini’s relatively more conventional movie about Jesus. (And how strange it seems now to be calling Pasolini’s Jesus movie “conventional” in any sense.)

Mubi’s Notebook blog has posted two extracts from the book: first, the foreword by Alain Badiou; and second, an extract from the writing of Pasolini himself.

Here is a brief, brief excerpt from the latter extract:

The poetic idea – which ought to become at the same time the conducting thread of the film – and also its novelty – consists in transposing the entire affair of Saint Paul to our time.

This does not mean that I want in any way to tamper with or alter the very letter of his preaching: on the contrary, as I have already done with the Gospel [of Matthew], none of the words pronounced by Paul in the film’s dialogue will be invented or reconstructed by analogy. And since it will naturally be necessary to make a selection from among the apostolic discourses of the saint, I will make this selection in a fashion that summarizes the entire arc of his apostolate (I will be aided in this by specialists, who guarantee the absolute fidelity to the entirety of the thought of Paul).

Why would I want to transpose his life on earth to our time? It is very simple: to present, cinematographically in the most direct and violent fashion, the impression and the conviction of his reality/ present. To say then explicitly to the spectator, without compelling him to think, that ‘Saint Paul is here, today, among us’, and that he is here almost physically and materially. That it is our society that he addresses; it is our society for which he weeps and that he loves, threatens and forgives, assaults and tenderly embraces. . . .

As always, I don’t know that I would have agreed with all of Pasolini’s decisions in making this movie, but it sounds like he would have given us something to think about, and I think it’s a pity that the film never came to fruition. I especially appreciate the way that Pasolini, unlike so many other people outside the mainstream of Christian thought, was apparently going to emphasize the continuity between Paul and the original Jesus movement, rather than the discontinuity that so many people emphasize in their rush to say why they like Jesus but dislike Christianity.

Many thanks to my friend Ron Reed for alerting me to the existence of this.