Christian Bale on the “very mercurial” God of the Bible and how Monty Python inspired his take on Moses September 30, 2014 Peter T. Chattaway 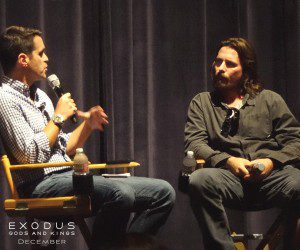 Tonight — the night before 20th Century Fox releases its second trailer for Exodus: Gods and Kings — the studio hosted a screening of roughly half-an-hour of footage from the film, followed by a Q&A with the movie’s star, Christian Bale.

The Wrap is the only outlet I’ve seen so far that has any details from the event, and they mention some interesting things, both about the content of the footage and the comments Bale made about his approach to the character — and the movies he turned to for inspiration.

Bale admits he took a look at The Ten Commandments (1956), easily the best-known version of the Moses story to date, but the first movies he watched were actually comedies like Monty Python’s Life of Brian (1979) and Mel Brooks’ History of the World Part I (1981). Here’s a relevant clip from the latter film:

Why did Bale turn to comedies? Partly, he said, because he wanted to make sure that he didn’t make a film that was so “earnest” that it “unintentionally” became The Life of Brian, but also because “you have to have humor with something that is as earnest as this, and as heavyweight as this. You have to have an element of comedy in your everyday life during filming, otherwise it becomes too depressing.”

To that end, Bale says he resisted his usual temptation to stay in character when the cameras weren’t rolling. And that might explain why Bale’s Exodus co-stars Joel Edgerton and Aaron Paul have said, in other interviews, that they were surprised — and delightedly so — to find that Bale was such a funny guy on set.

The Wrap notes that the film seems to have a “modern” tone in places, such as the first scene that was shown to the audience tonight, in which Moses “rolls his eyes and mocks the pharaoh’s superstitions”. This fits with what Ridley Scott has said before, about the film exploring whether Moses was an agnostic.

The Wrap also notes that the clips did not show the parting of the Red Sea, just the “unparting” as the waters return. This may or may not be significant, in light of Scott’s earlier comment that the Red Sea story may have been inspired by a tsunami.

Bale also made some interesting comments about the research he did, which included reading all five books of the Torah as well as the Koran and historical works like Jonathan Kirsch’s Moses: A Life. He was surprised to find that the Bible depicts God as “very mercurial”, that Moses was “a very troubled and tumultuous man”, and that there was zero interest in the afterlife in that portion of the Bible:

“The really fascinating thing to me [was that] there was absolutely no mention of the afterlife at all,” he said. “And other than as a scapegoat, there’s no mention of the devil. God is described as a god of good and evil.”

If any other reports come out of that screening, I will update this post.

P.S.: Since Bale says he turned to comedies for inspiration while preparing for this role, I would be curious to know if he watched Wholly Moses! (1980), a sort of Life of Brian rip-off that starred Dudley Moore. It’s not that good, but still.

Update: A few other reports have surfaced already — and they disagree as to whether the journalists were shown seven, eight or nine scenes from the film. Ah well.

These other reports do have a couple new bits that The Wrap didn’t mention.

ComingSoon.net, for example, says Bale also read Louis Ginzberg’s The Legends of the Jews, and it notes that Bale avoided watching the 1995 miniseries Moses because he was afraid he’d end up imitating Ben Kingsley’s performance in that film.

Variety, meanwhile, quotes Bale to the effect that Moses “kept trying to get out of the gig” of saving the Hebrew people. Bale also said that Steve Zaillian, who wrote the final draft of Exodus, felt the film “was really a story of revolution”.

October 1 update: Gregory Ellwood at Hitfix has a more complete transcript of the quote from Bale about the “very mercurial” nature of God, etc.:

“The biggest surprise for me was the nature of God,” Bale said. “He was also very mercurial. Although Moses was able to talk directly with God there is an episode where God threatens to kill Moses, where he threatens to wipe out everybody but Moses and start again. And the really fascinating thing to me is there is no mention of the afterlife. Since Moses was coming from Egypt, where there is an obsession with death, I was very surprised by that. Other than Azazel, this literal scapegoat, there really is no mention of the devil. God is described as a God of good and evil. All of this was fascinating to me.”

Bill Desowitz at Thompson on Hollywood also quotes this bit where Bale compares his version of Moses to Charlton Heston’s: “Heston’s Moses was uplifting — ours should be someone desperately moving forward. This is straight up Moses.”

A video of the complete Q&A is now up on YouTube, too:

September 30, 2014
Exodus: Gods and Kings: three more pictures to whet our appetites for the new trailer coming tomorrow
Next Post

October 1, 2014 The second Exodus: Gods and Kings trailer: a shot-by-shot analysis (lots of swords, a prophecy, and a family)
Recent Comments
0 | Leave a Comment
"I found Hanky Panky a pretty cool 80s movie when I first saw it on ..."
UniblabBR Sidney Poitier marathon: Hanky Panky (1982) ..."
"In 1972, yes. The movie was made in 1956 but the ratings system didn't exist ..."
Peter T Chattaway One of the reasons I do ..."
"And to think... this movie was rated G? It was."
Bishop One of the reasons I do ..."
"John 7:5 states explicitly that the brothers of Jesus did not believe in him, at ..."
Peter T Chattaway The Chosen starts shooting its second ..."
Browse Our Archives
get the latest from
FilmChat
Sign up for our newsletter
POPULAR AT PATHEOS Entertainment
1