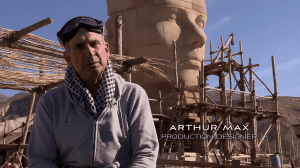 Now that it is out there for everyone to see — and now that it is failing with critics and audiences alike — it seems highly unlikely that Exodus: Gods and Kings will be remembered for any major awards come Oscar time. The film has already, in fact, been snubbed by the Academy’s visual-effects and makeup & hairstyling branches, which neglected to include Ridley Scott’s Bible epic on their shortlists.

There is still hope for some of the other below-the-line talent, though, a few of whom are still promoting the film — and their role in making it — in the trades and other outlets. What follows is a round-up of some of the more recent interviews.

Last week, the British website Den of Geek ran an interview with production designer Arthur Max, who discussed, among other things, how he and his crew moved the same columns and statues around on a soundstage to create different interior “sets”, and how they distinguished between the two main Egyptian cities:

You may have noticed how the palette changed from ancient Memphis, which was already 1500 years old, which was more faded and patinated in watercolour tones. They were derived from the orientalist painters of the 19th century – David Roberts particularly, who visited the Middle East and yearned for the exoticism of nostalgia of ancient worlds, as we are. Our old friend Jean Leon Gerome who we cloned on Gladiator quite a bit, he did some biblical paintings. And an Englishman, Edward John Poynter, also.

So that was supposed to be the textural, romantic, ancient city. Then when we went into Par Ramses, we chose darks and blacks and malachites and golds for drama and contrast. An ominous atmosphere, because the plagues were coming . . .

You probably noticed that we have many more pyramids than there actually are! But when it comes to Par Ramses, who’s to say? We’re not even sure where it was. There are some runes that they found in the city now called Tanis. They think it might have been there, but they’re not really sure. They don’t know exactly. There are some records and descriptions of what it was supposed to be – it was a town about 10 kilometres square and walled in. So we went with that, and took it a bit further.

There are some scholastic, French illustrated books that we looked at, which gave insights into how complicated they think these cities may have been. There was a documentary about a scientist who used satellite imagery over Egypt, and found that there was scads more than they ever knew – city streets, buildings, complexes that are in the geophysics of their scans. I saw this documentary and realised that that’s what we’re doing. There’s nothing wrong in it. When you see the scans, it’s huge.

So I think they were much more cosmopolitan and developed than you usually see in the documentaries up to now. That’s what we went for: a mega city.

The week before that, Max spoke to the Daily Star about the ongoing need for physical sets, rather than the digital kind, and he mentioned that the giant head of Ramses (shown in the photo above) was “bigger than the Prometheus head by at least 10 feet.”

Prior to that — going back just over a month, now — Max was featured in articles that looked at the production designs of various different films. First, Deadline:

“It was a gift from nature to find this valley just outside Almeria,” Max says. “It was a couple of square kilometers surrounded by mountains, which looked just like Sinai. We built a grand avenue running through it, lined with palm trees, and put Pi-Ramesses down the bottom and Old Memphis up the top.” . . .

Digital set extensions, pioneered on Gladiator, now are par for Scott’s course, and Max’s team takes care of the full architectural designs before shooting, so the director can plan his shots accordingly. But everything that can be practically built still is; few sets match Max’s for scale. “Ridley wants to give his actors an environment in which they can lose themselves and suspend their disbelief,” he explains. “The set in Spain was self-contained, so you could do the whole tour.”

And then, The Hollywood Reporter:

Before creating ancient Egypt’s Royal Palace of Memphis, Max took a research trip up the Nile to visit the Luxor Temple and the Temple of Amun. He also made stops at the British Museum, the Petrie Museum, the Metropolitan Museum of Art and the Egyptian Museum of Turin. The $150 million production spent 16 weeks building large sets at Pinewood Studios, and CG was used to extend their monumental scale. “Each column is 10 feet in diameter and about 70 feet high,” says Max. “All the furniture is hand-built — there’s not a lot of ancient Egyptian furniture around. All the murals are hand-painted in traditional pigments.” They even re-created period sculptures like a 42-foot high head of Ramses the Great.

Variety also ran an article on the film’s “artisans”:

Filmmakers strive for period authenticity — up to a point.

Similarly, cinematographer Dariusz Wolski requested the use of silk fabrics to enhance the film’s warm, golden-color palette, even though linen and wool were more period-specific.

Finally, there is costume designer Janty Yates, who was profiled today in a Deadline piece on below-the-line talent who work regularly with the same directors:

A collaborator since Scott’s best picture winner Gladiator in 2000, Yates—for whom the same film netted her a costume design Oscar—was able to remain unruffled when the director asked her to come up with a new style of armor for an entire army early in production on Exodus.

The problem: Historical research indicated that the Egyptians and the Hittites both wore lamellar armor—the familiar fish-scale pattern. But if both wear lamellar in an onscreen battle, how do you know who’s who? “(Scott said), ‘Just make up another armor for the Hittites,’ ” Yates recalls with a laugh. She did.

“We have the great fortune of having a shorthand which, funnily enough, I was only aware of lacking once I worked with other directors,” Yates says. “It seemed to be quite seamless with Ridley, and I realized how lucky I was. He was a production designer before he was a director.”

Did any actor have any specific costume demands?

You’ll be able to see all that in the director’s cut. I think Ridley’s problem was that he was absolutely torn because he would have made the perfect film for three and a half hours.

And a couple weeks before that, she spoke to Variety:

In all, she supervised about 7,500 costumes. The intent was to dazzle. “The Egyptian courts were shimmeringly stunning,” she says. And when things didn’t quite measure up, Scott gave them that extra “little twist.”

“When we first dressed (Sigourney Weaver’s Queen Tuya),” Yates recalls, “Ridley said, ‘I just want her to be a little more of a man-eater.’”

Variety also posted the following video interview with Yates, who comments that “the only difficulty we had was to make a T-shaped garment — which is a shapeless sack, basically — look, for want of a better word, quite hot.”

Yates, as noted above, won an Oscar for her work on Gladiator. Max, for his part, has never won an Oscar, but he was nominated for Gladiator and American Gangster, which was also directed by Ridley Scott. Time will tell if their work on Exodus is recognized when this year’s nominations are announced January 15.

January 1 update: The Los Angeles Times also has an interview with Janty Yates:

That wonderful color. Ridley didn’t want [Moses] to be anywhere near Ramses [in color tones]; he wanted him to be completely opposite, i.e. military and impeccable but, of course, he had to be wearing a dress. So we had to butch it up a bit. The jewelry, belts, everything was made by hand. And everything Christian [Bale] put on he looked wonderful in, which is always elevating for a costume designer.

I suppose it’s not every day a designer gets the opportunity to dress God as an 11-year-old boy, is it?

Ridley had a specific vision of this boy as God. We tried him in a lot of T-shaped garments, and in the end he said he wanted him “very simple,” disappearing into the earth, very earth tones and colors. It was a bit of a trial and error, really; though, ultimately you can’t mess much with God.

The Times also has one or two costume-design sketches that I hadn’t seen before.

April 27 update: The Fan Carpet has its own interview with Yates now, which was timed to coincide with the film’s home-video release in the UK:

Well basically with every film, of this ilk set in thirteen hundred BC, you do as much research as possible and I was very fortunate that there is an awful lot of Egyptian drawings and carvings, plus there are a lot of artefacts in the Berlin Egyptian museum and the Cairo museum, and in the British museum as well. As Ridley always says ‘you research the granny out of it and then twist it a little bit.’

Ramses was always going to be as flamboyant as hell, he was such an ego maniac and so vain. His amour was actually taken from research, it did exist but Ridley wanted a big contrast and so whist he was flamboyant, Christian had to play Moses as a serious general and soldier, so we were much more sober with him with navy blues and leather, it was just beautiful as well in a much simpler for military way.

May 6 update: What Culture also has an interview with Yates now:

Brendon: Does Ridley bring a lot of the first ideas to the table or does he expect you to set the agenda first of all as you start each project?

Janty: Usually, I get the script quite early then spend three to four weeks doing really serious research. Then I present Ridley with a show and tell, and that’s when he mentions, for example, that I’ll need to come up with a new armour for the Hittites. That’s what happened this time. We get an awful lot hammered out in that first show and tell.

Then, as we go along we do costume fittings, and Ridley likes to come along. I did Christian [Bale]’s fitting in Ridley’s office, and he came along to three of Joel [Edgerton]’s fittings. He loves to participate, and he does really care.

If I find any more interviews with Yates or Max, I will add them to this post.

December 28, 2014
Box office: Exodus: Gods and Kings falls some more in its third week while most other films go up
Next Post

December 30, 2014Star Trek XIII has a new director and a release date -- just 18 months from now -- but does it have a script?
Recent Comments
0 | Leave a Comment
Browse Our Archives
get the latest from
FilmChat
Sign up for our newsletter
POPULAR AT PATHEOS Entertainment
1