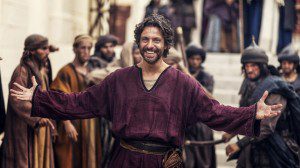 Films like Clavius and TV specials like Killing Jesus might be in the works, but it’s probably safe to say that the most-hyped Bible-themed production of 2015 will be A.D., the follow-up to Mark Burnett and Roma Downey’s phenomenally successful The Bible.

They released a trailer for the new series last month. And now they’ve released a new promo set to the classic song ‘They’ll Know We Are Christians’ (which has been renamed ‘By Our Love’ for some reason), performed here by For King & Country.

Here is the new promo:

You can also get photos and other promotional materials for the show here and here.

A.D. will run for 12 episodes, the first of which airs Easter Sunday, i.e. April 5, 2015. That’s only three and a half months from now, in case you’re wondering!

December 18, 2014
More pics from the Jesus/Satan film Last Days in the Desert
Next Post

December 19, 2014 Should Bible movies be relegated to the Christian ghetto?
Recent Comments
0 | Leave a Comment
""AD" stands for "Anno Domini", a Latin expression meaning "In the Year of Our Lord".So ..."
Peter T Chattaway The Chosen — season one, episode ..."
"Why does it say at the start of episode 3 that it takes place 26 ..."
Desiree Chamberlain The Chosen — season one, episode ..."
"What about Hellboy, The Grudge, Ghoulies, and Anaconda?"
45th Spiderbob Group VGCP When R-rated franchises go PG-13 …
"Not yet, but I might do something like that once Season 2 is complete."
Peter T Chattaway The Chosen — season one scripture ..."
Browse Our Archives
get the latest from
FilmChat
Sign up for our newsletter
POPULAR AT PATHEOS Entertainment
1