Should Bible movies be relegated to the Christian ghetto?

Should Bible movies be relegated to the Christian ghetto? December 19, 2014 Peter T. Chattaway 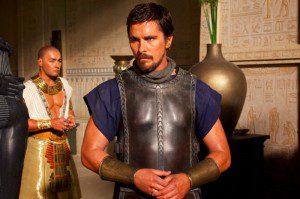 The soft opening for Exodus: Gods and Kings last week has prompted a number of think pieces, asking what Hollywood could do better the next time it turns to the Bible for source material.

One such piece appeared in Variety last Sunday, and it’s… problematic.

For starters, it almost seems to suggest that Hollywood should focus on making low-budget movies for the Christian ghetto, i.e. films like Son of God and God’s Not Dead, which cost very little to make and were thus profitable in the U.S. even though they earned almost nothing overseas.

Chris Stone, of the notorious Faith Driven Consumer group, is quoted as saying:

“Hollywood needs to do what they do for any market segment . . . Just as they would for a Hispanic or African-American or LGBT market, they need to have an intimate understanding of our group and need to engage us where we are and tell our story in a way that resonates with us.”

That’s all well and good for a film like God’s Not Dead which is content to preach to the choir. But the article in which this quote appears is a post-mortem on Bible movies like Exodus and Noah, and as such, there are two major problems with it.

First: you’ll never get a film of this scale made if all you’re aiming for is the church crowd. Yes, of course, Hollywood should reach out to groups that have a special connection to the story being told, but Hollywood simply cannot make a big-budget Bible epic if all it does is aim for that niche audience.

And second: what’s this “our story” business? The story of Moses was central to the Jewish faith long, long before Christianity came on the scene.

In that vein, this quote from the end of the Variety piece is especially frustrating:

“Everybody was happy when they hired a female director to make ‘Wonder Woman,’” said Phil Contrino, vice president and chief analyst at BoxOffice.com. “Maybe Christian directors should be making some of these movies.”

I absolutely agree that films like these can be more engaging when they are made by people who have a personal interest in the subject matter. I was disappointed, for example, when Scott Derrickson didn’t get to make that adaptation of Paradise Lost that he had been developing for a few years. Given that Derrickson is a Christian who has made a few movies about demons, his take on the origins of Lucifer could have been really interesting. It certainly would have given us a lot to talk about.

But again: the Old Testament was Jewish long before it was Christian, and Noah in particular was deeply informed by the director’s Jewish background. To just ignore that fact the way Variety does seems irresponsible to me.

And frankly, why should we impose a religious litmus test on the makers of Bible movies? One drum my friend Steven D. Greydanus has been beating for the last little while concerns the fact that some of the best films about religion and religious people have been made by atheist filmmakers. We can learn from their perspective on our stories just as they, hopefully, can learn from the stories that they adapt.

And yes, that means we can learn from Ridley Scott and his Moses movie, too.

As it stands right now, I don’t think Exodus is a particularly good film, taken purely as a film, and I think it was unnecessarily risky for Scott to deviate from the biblical tale as much as he did when there was so much money on the line.

But if, as some Christian activists insist, the story of Moses is foundational to western civilization, then everyone who was raised within that civilization has a right to comment on it, and it behooves us to pay attention and listen to what they’re actually saying, and to see what they’re actually doing with that story, instead of complaining that the filmmakers didn’t pander to us as much as we’d like.

December 21, 2014 Box office: Exodus: Gods and Kings loses its audience faster than any recent Bible movie or Ridley Scott film
Recent Comments
0 | Leave a Comment
Browse Our Archives
get the latest from
FilmChat
Sign up for our newsletter
POPULAR AT PATHEOS Entertainment
1