Ben-Hur footage has been revealed — but not online

Now that A.D. The Bible Continues has come to an end, it’s time for Mark Burnett and Roma Downey to promote their next Jesus-movie project. And so it came to pass yesterday that they, along with Paramount chief Rob Moore, brought some clips from their upcoming adaptation of Ben-Hur to Variety magazine’s ‘Purpose Summit’, a gathering of movie types discussing so-called “faith-based” entertainment.

The New York Times describes the footage that was shown:

Scenes showed at the summit involved plenty of action, but also included a direct shot of the Crucifixion and several references to underlying themes about mercy and forgiveness. They were intercut with video assurances by Mark Burnett, who is a producer of the film, and Rodrigo Santoro, who plays Jesus, that the expectations of the faithful will be honored by this one.

Burnett and Downey screened a 30-second clip of the iconic chariot race scene. Earlier in the day, Paramount vice chairman Rob Moore showed off an extended “Ben Hur” clip that included behind-the-scenes material, which marked the first glimpse that the studio has offered anywhere of the pic.

It has never been entirely clear to me just how involved Burnett and Downey are on the creative side of this film; given that the project already had a director and a finished screenplay, I have always assumed that Burnett and Downey were brought on board largely to help sell the film to Christian audiences (the same way Lifetime got them to produce a documentary on The Women of the Bible to help promote The Red Tent, a miniseries that took major liberties with the book of Genesis).

For his part, Moore said Paramount is hoping that Ben-Hur can avoid the backlash that the studio endured on Noah — a film that Moore, who is himself a Christian, greenlit because he thought Christians would appreciate it — and to that end, Moore said Burnett and Downey were brought on board to “really help to make sure the telling of Christ’s story in the movie worked well together as a great story.”

In keeping with that goal, Variety reports:

Downey spent a great deal of time on the set in Italy, serving as the “guiding light,” ensuring that the spirit of the story of one man’s persecution and redemption remained intact.

The couple hired an advisory board of 40 spiritual leaders to produce “The Bible,” and they had nearly as many engaged as consultants on “Ben Hur.” “We brought (some of) the most important faith leaders to Rome onto the set of ‘Ben-Hur,’ ” Burnett said. He noted that many of them took the opportunity to snap photos in the chariots.

Burnett and Downey also talked about the vast untapped “faith-based” audience and the need for accuracy and authenticity when adapting the Bible. No one, as far as I can tell, mentioned the falling ratings for A.D. The Bible Continues or the fact that many Christians have grumbled about that show’s deviations from the biblical text.

— The photo above is from the famous 1959 version of Ben-Hur, natch.

June 25, 2015
Joseph Fiennes is playing Eric Liddell in The Last Race
Next Post

Entertainment
Simon of Cyrene and his family, on film.
FilmChat 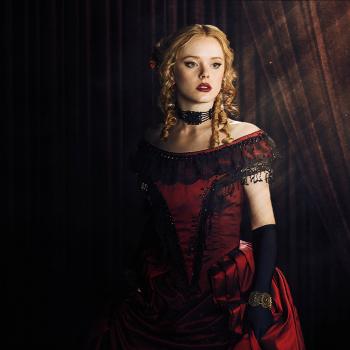