North African actress rumoured to be playing The Mummy

One of the more persistent controversies over the past two years has concerned films that are set in ancient Egypt but have no actual Egyptians in any of the lead roles.

Exodus: Gods and Kings, which came out last year, had a number of Middle Eastern actors in its supporting cast, while Gods of Egypt, which comes out early next year, features Asian and African-American actors in its character posters — but in both cases, the central roles have gone to actors of northern European descent, and the films have been slammed in social media for their “whitewashing” of the past.

Now comes word that Universal Studios has found an actress ready to tackle the title role in their upcoming reboot of The Mummy — and it seems that the filmmakers may be trying to avoid the negative attention that has plagued those other films.

The actress in question is Sofia Boutella, an Algerian whose family moved to France when she was ten years old. She recently made her mark on the big screen as Gazelle, the killer with prosthetic blade-shaped legs in Kingsman: The Secret Service.

Boutella isn’t Egyptian, but she is North African, which makes her a much better fit for the part of an ancient Egyptian than the stars of Exodus and Gods of Egypt.

The mummy in the 1999 and 2001 films was played by Arnold Vosloo, a South African “of Dutch and German ancestry.” His lover was played by Patricia Velasquez, a Venezuelan whose mother is “a member of the indigenous Wayuu people.” And the Pharaoh Seti I was played by Aharon Ipalé, who hails from Morocco.

Interestingly, at least one actor of Egyptian descent has played an ancient Egyptian in a recent blockbuster franchise (the Night at the Museum movies), but his ethnic background hasn’t always been recognized as such, as per this meme: 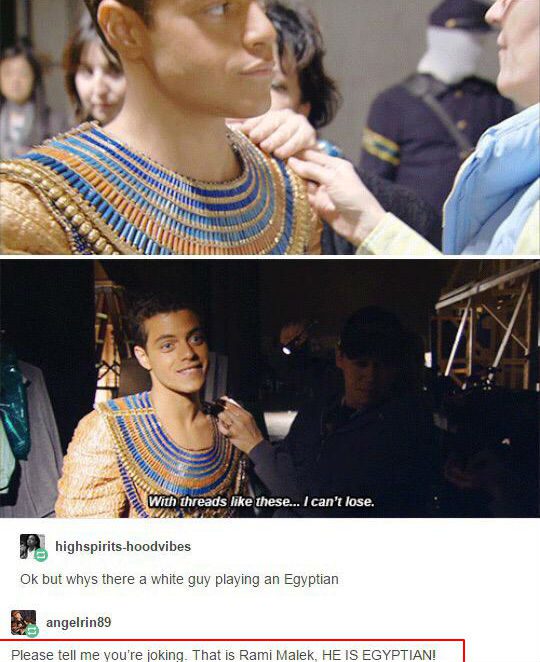 Interestingly, when this character’s parents were introduced in the third Night at the Museum, they were played not by North African or Middle Eastern actors but by actors of at least partial Indian descent (Ben Kingsley and Anjali Jay).

— The screen capture at the top of this post is from Kingsman: The Secret Service.

December 4, 2015
The late Robert Loggia and the two Bible films he made
Next Post

December 9, 2015 The BBC's Noah's Ark is coming to DVD in North America
Recent Comments
0 | Leave a Comment
"This was a refreshing read. I'm an average fan of Hellboy but I'm also a ..."
Andrew Mathews Doug Jones on Hellboy and Christianity.
"Great interview! One thing I've wondered since watching Season 1 is why they didn't include ..."
A.J. Cattapan Interview: The Chosen writer-director Dallas Jenkins ..."
"Earth actually does exist in the Dark City universe. Early in the film when John ..."
Edward Clint Dark City and the ambiguous ending.
"I don't always agree with your opinions, but your reviews are never less than interesting ..."
Laura-Lee Rahn The top-grossing Italian movie of 2019: ..."
Browse Our Archives
Follow Us!

Does God Care How We Worship?
Schaeffer's Ghost
Related posts from FilmChat