Timur Bekmambetov says his version of Ben-Hur will use “a very grounded style of filmmaking” March 29, 2016 Peter T. Chattaway

Timur Bekmambetov is making the rounds right now to promote Hardcore Henry, an action film he produced that comes out April 8, and along the way he has talked a bit about the new Ben-Hur, which he directed and is due to come out August 12.

Speaking to SlashFilm, Bekmambetov said his Ben-Hur — the fifth live-action take on the story since 1907, and the first feature-length big-screen version since the 1959 classic — will be more “grounded” than some of the other films he has made:

The style comes from the script and the tone of the movie. For example, in Ben-Hur, it’s very, very different. The visual concepts are very different, because it was very important, for this project, following John Ridley‘s (12 Years a Slave) script, to make it as grounded as possible and as real as possible. In the whole movie, there’s not one slow-motion shot [Laughs]. It’s handheld, no huge crane shots, slow-motion, or whatever. It’s a very grounded style of filmmaking, which was important.

That’s an interesting comment, in light of what we have seen so far. Early on in the first trailer, there is a point-of-view shot as Judah Ben-Hur is dragged out of a sinking ship and tossed into the air, and the camera looks down at Judah’s feet…

…which many people have compared to the point-of-view shots in Hardcore Henry: 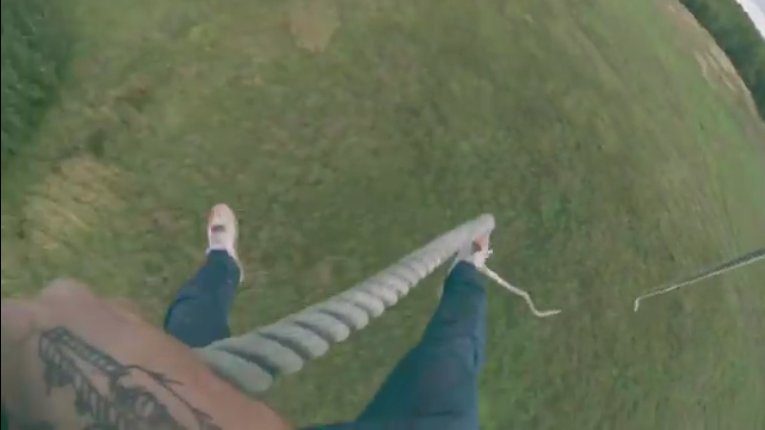 Recall, also, how Bekmambetov said last year that his version of the iconic chariot race will be inspired by YouTube videos (“a lot of whip pans and zooming”).

Anyway, moving right along, Bekmambetov also suggested that the “groundedness” of his film will set it apart from earlier adaptations of Lew Wallace’s novel:

No matter what, people will compare it [to the 1959 film], and there’s no way you can survive comparisons made to the classical movies. People will not compare us to the movie, but to the dream, the memory [of the movie]. The movie should be very different in order to survive, and that’s why Ben-Hur is very realistic. It’s a realistic, deep drama, not a huge tentpole attraction. It’s just drama.

Bekmambetov — the director of Wanted and Abraham Lincoln: Vampire Hunter — is not exactly known for making “just drama”, so we’ll see how that pans out.

One other thing the SlashFilm interview makes plain, which I somehow hadn’t fully registered yet, is that Messala is Judah’s “adopted brother” in this film.

I had thought that the use of the word “brother” in the trailer was only figurative, but it seems this is another change that the filmmakers have made to the story — along with eliminating Judah’s adoption by Quintus Arrius after the sea battle and adding a scene in which Judah meets Jesus before Judah is enslaved by the Romans.

March 30, 2016 Review: God's Not Dead 2 (dir. Harold Cronk, 2016)
Recent Comments
0 | Leave a Comment
"I certainly hope to! Just haven't had the time to do Season 2 yet."
Peter T Chattaway The Chosen — season one scripture ..."
"Hi Peter.Thanks for this extensive list. Will you be doing the same for all seasons? ..."
Meelperd The Chosen — season one scripture ..."
"I have neither noticed that much. I recenty read a leadership book inspired from Cyrus ..."
Hamid Mortazavi Cyrus the Great — a Persian ..."
""AD" stands for "Anno Domini", a Latin expression meaning "In the Year of Our Lord".So ..."
Peter T Chattaway The Chosen — season one, episode ..."
Browse Our Archives
get the latest updates from
FilmChat
and the Patheos
Entertainment
Channel
POPULAR AT PATHEOS Entertainment
1