Watch: Jesus gives Judah Ben-Hur a drink of water in a new “epic faith” trailer for the upcoming Ben-Hur remake

The first trailer for the upcoming remake of Ben-Hur came out last week, and it gave us only a very brief glimpse of Jesus. A new trailer — which first surfaced today on the Facebook page for Son of God, the other big-screen Jesus movie produced by Mark Burnett and Roma Downey — gives us a little more. Check it out below the jump.

Here is the new trailer:

The key bit in this trailer, for Ben-Hur buffs, is the scene where Jesus gives a drink of water to Judah Ben-Hur after Judah is enslaved by the Romans.

In previous film adaptations, Judah was bound by a chain or rope. But in this version of the story, Judah is carrying a yoke that looks rather like a crossbeam:

The 1925 and 1959 films avoided showing Jesus’ face, but the 2010 miniseries showed it quite clearly (more on that further down), and so does the new film:

This trailer also gives us a different view of Jesus on the cross than the first trailer:

Lew Wallace, who wrote the original novel in 1880, famously insisted that the 1899 stage adaptation avoid any direct portrayal of Jesus; as a result, Jesus was represented not by an actor but by a beam of light. Wallace did not live to see any of the films based on his novel, but the first few film versions honoured his preference by keeping the face of Jesus hidden from the viewer as he interacted with the characters.

In the 1925 version of the water scene, all we see is the hand of Jesus. It scoops some water: 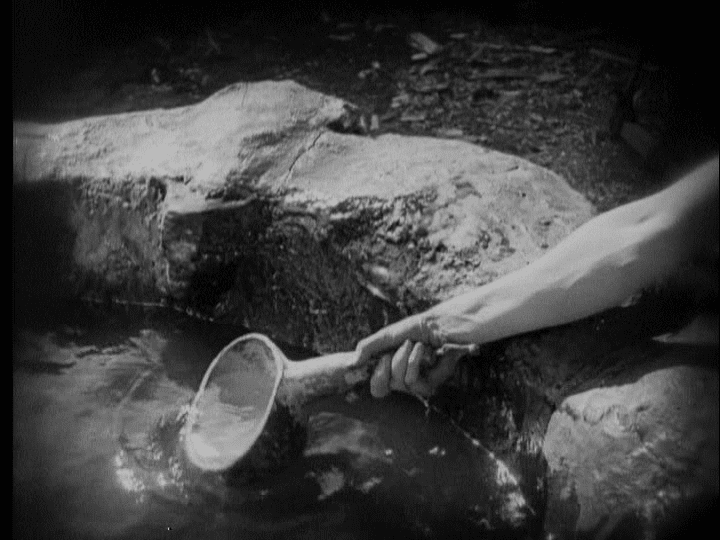 It reaches from behind a man who is standing by the well: 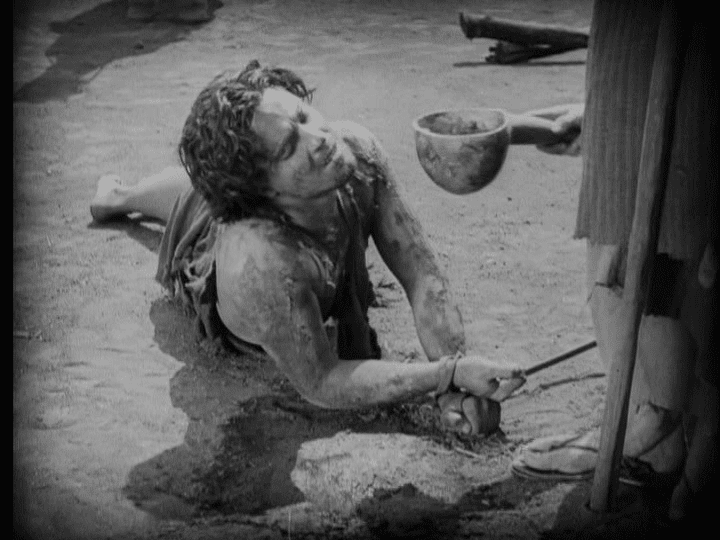 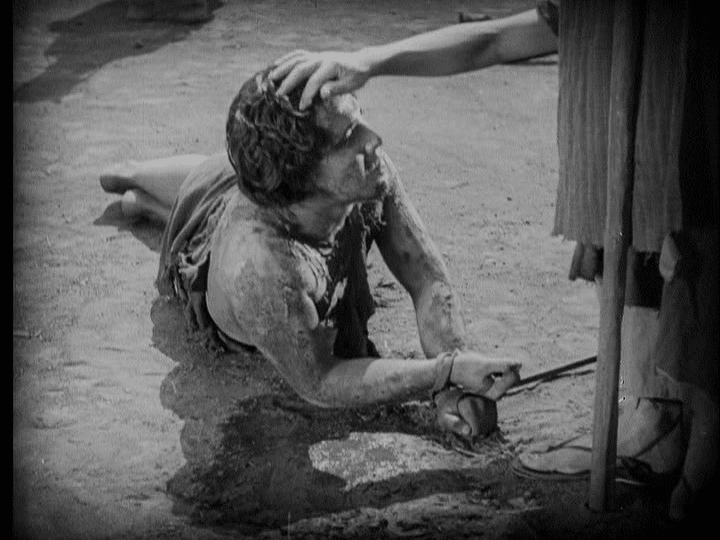 And then it goes back to its carpentry: 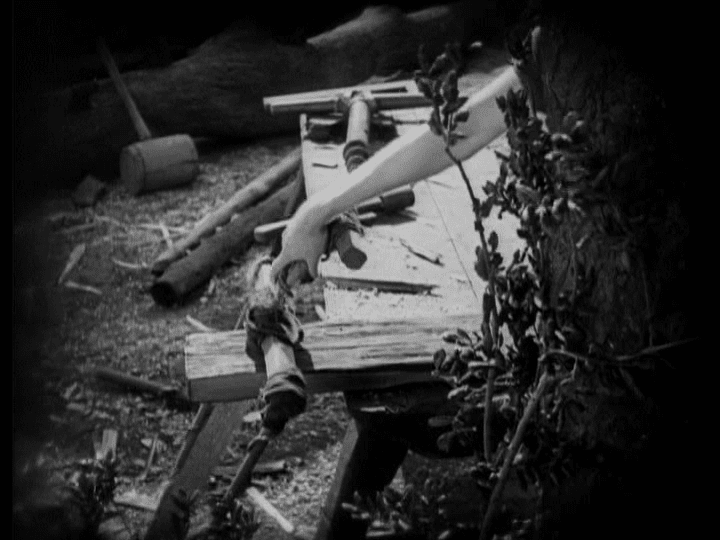 In the 1959 version of this scene, we see more of Jesus, but still not his face. Once again, Jesus puts his carpentry aside as the slaves walk past his house:

Next we see his hand as he washes Judah’s face:

Then he gives Judah a drink:

This time, a Roman soldier tells Jesus to stop — and Jesus rises into the frame, that imposing iconic hair of his dominating the Roman in terms of visual space:

Finally, the Romans leave with the slaves, and Jesus takes a few steps towards them while looking at Judah, thus giving us our best view of Jesus from behind so far:

The 2010 miniseries is nowhere near as mystical or ceremonious as the earlier films. Instead of a water scene, there is a scene in which Jesus walks right up to Judah, says “Forgive them, for they know not what they do,” and is then dragged away: 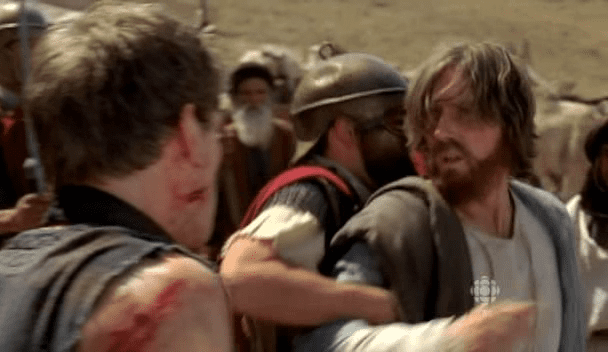 How will the Jesus of the new film deal with the Romans? We shall see August 12.

In the meantime, here’s the complete water scene from the 1959 film:

And here is the scene in which the roles are reversed, as Jesus goes to his crucifixion:

Update: Here is how the water scene is described in the original novel:

Thereupon a youth who came up with Joseph, but had stood behind him unobserved, laid down an axe he had been carrying, and, going to the great stone standing by the well, took from it a pitcher of water. The action was so quiet that before the guard could interfere, had they been disposed to do so, he was stooping over the prisoner, and offering him drink.

The hand laid kindly upon his shoulder awoke the unfortunate Judah, and, looking up, he saw a face he never forgot–the face of a boy about his own age, shaded by locks of yellowish bright chestnut hair; a face lighted by dark-blue eyes, at the time so soft, so appealing, so full of love and holy purpose, that they had all the power of command and will. The spirit of the Jew, hardened though it was by days and nights of suffering, and so embittered by wrong that its dreams of revenge took in all the world, melted under the stranger’s look, and became as a child’s. He put his lips to the pitcher, and drank long and deep. Not a word was said to him, nor did he say a word.

When the draught was finished, the hand that had been resting upon the sufferer’s shoulder was placed upon his head, and stayed there in the dusty locks time enough to say a blessing; the stranger then returned the pitcher to its place on the stone, and, taking his axe again, went back to Rabbi Joseph. All eyes went with him, the decurion’s as well as those of the villagers.

This was the end of the scene at the well. When the men had drunk, and the horses, the march was resumed. But the temper of the decurion was not as it had been; he himself raised the prisoner from the dust, and helped him on a horse behind a soldier. The Nazarenes went to their houses–among them Rabbi Joseph and his apprentice.

And so, for the first time, Judah and the son of Mary met and parted.

That last sentence is quoted verbatim in an intertitle in the 1925 film: 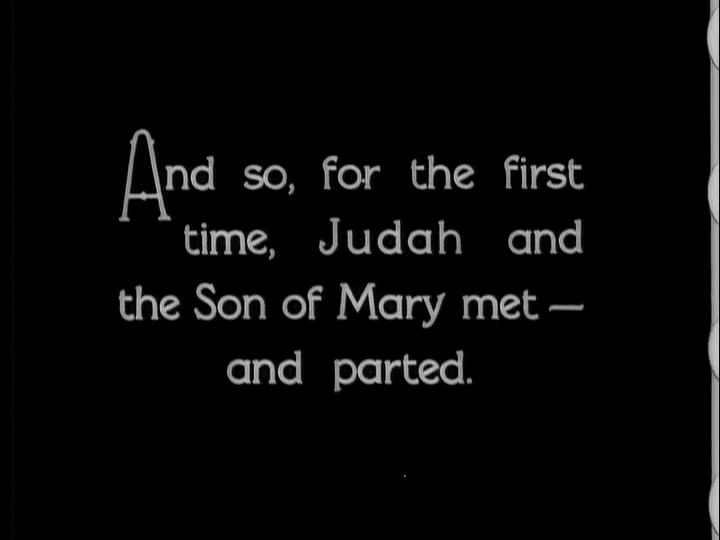 March 22, 2016
Watch: New TV spots and featurettes give Miracles from Heaven an Easter-themed push
Next Post

March 24, 2016 Watch: Ewan McGregor plays Jesus and the Devil in the first trailer for Last Days in the Desert
Recent Comments
0 | Leave a Comment
Browse Our Archives
Related posts from FilmChat