It’s anyone’s guess when we’ll get to see Mary Magdalene in North America, given all the chaos at The Weinstein Company these days. But the film’s foreign distributors are sticking to their release plan, and today Universal — which is releasing the film in the UK on March 16 — posted the first trailer for the film. Check it out below the jump.

I have to say, I don’t expect to agree with everything in this movie, but I really like some of the things this trailer does.

For example, the filmmakers — including director Garth Davis and lead actress Rooney Mara — have been quite adamant that the Mary Magdalene of this film will not be a prostitute, which is excellent. But the trailer makes clear that the film will touch on the tradition (per Luke 8:2) that Mary was once possessed by seven demons.

The catch is, the film appears to suggest that the possession never happened, but was imagined by Mary’s relatives. The Jesus of this trailer does not cast the demons out so much as reassure Mary that she doesn’t have any. So, that would fit with what the filmmakers have described as the film’s more “humanistic” perspective on the gospels.

But! The trailer still hints that Jesus can heal people — perhaps in a more psychological than supernatural sense, but still — and there is a bit where Jesus’ mother basically foretells his destiny, and there is a scene in which Mary Magdalene asks Jesus what it feels like to be “one with God”, and Jesus says no one has ever asked him that before.

So, we’ll see how that all shakes out, once the movie comes out.

Meanwhile, I’ve posted a few key screenshots from the trailer below.

Here is Chiwetel Ejiofor as Peter (whose opposition to Mary being treated so favourably by Jesus has echoes of the final passage in the Gnostic Gospel of Thomas):

Here is an actress whose name I do not know as Jesus’ mother Mary:

Here is Jesus baptizing Mary Magdalene personally (John 3:22 does seem to indicate that Jesus baptized people, but John 4:2 says it was the disciples and not Jesus himself who did the baptizing, which many scholars now regard as a later editor’s gloss):

Here is a person apparently being “healed” by Jesus:

Here, apparently, is Jesus leading his followers on the first Palm Sunday:

Here is Jesus on the cross:

And here are some epic shots of Jerusalem and the Temple:

Mary Magdalene opens in the UK on March 16 and (hopefully) in the US on March 30.

Update: Transmission Films is releasing the film in Australia on March 22. 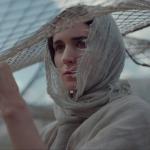 November 27, 2017
Our first (official) look at Rooney Mara as Mary Magdalene
Next Post 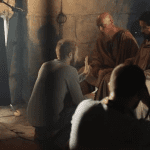 December 2, 2017 Watch: A featurette goes behind the scenes of Paul, Apostle of Christ
Recent Comments
0 | Leave a Comment
Browse Our Archives
get the latest from
FilmChat
Sign up for our newsletter
POPULAR AT PATHEOS Entertainment
1