What Both Sides Completely Miss In The Abortion Discussion

The abortion discussion is one of the most polarizing discussions one can have. In fact, I usually avoid it for that reason– the conversations are often so filled with strife that they don’t accomplish anything or remotely move the conversation forward.

Yesterday my friend John Shore had a great piece– 5 e-z steps to calming down fights over abortion, which got me re-thinking about why discussions on this issue are often so impossible. In the end, I think this disconnect is because both sides are failing to realize or acknowledge some critical information. With critical information missing from both ends of the discussion, the conversation is often stuck in a hopeless cycle that doesn’t lead to anywhere. So, here’s what I think both sides are completely missing, and why it matters:

What the Pro-Choice Movement is Missing in the Discussion

The crucial piece I feel the pro-choice movement has overlooked, is that abortion is not simply an issue that affects a woman and “her body”. Framing the conversation in this way makes it appear that someone on the opposition wants to control what a woman does with her own body, placing it in the same category as trying to tell a woman she can’t go out and get a tattoo on her own body.

This is an unfair, perhaps borderline dishonest way to paint the opposition, because abortion isn’t that simple.

For many of us, it is easy to disconnect from the reality of it for a few reasons. First, most of us have never seen a “fetus” other than in artist renditions in pregnancy books, as seen here to the right. Second, the term fetus itself, although a technical term, doesn’t fully humanize the reality of a child in the womb.

You see, I can speak from a different level of experience in this area than probably the average Joe, because I am intimately familiar with what a “fetus” is like. Based on my personal experience there is 100% no doubt in my mind that “fetus” is a term which fails to completely humanize an actual baby who hasn’t been born yet.

When I was still making a living as a photographer, I decided to become an affiliate with a nonprofit to give back to the community. This organization I still deeply respect is called  Now I Lay Me Down To Sleep (NILMDTS), and is a collection of professional, volunteer photographers who serve families who experience the loss of a child. Through NILMDTS, families receive free, professional portraits of their child who has passed– the gift of “remembrance photography”.

For a long, and ultimately emotionally draining year, I’d often get woken out of bed with a phone call that would say, “This is Maine Medical Center. We are having a ‘fetal demise’ and the family would like to have your services”. I still remember the first time I arrived to meet a grieving family who had just lost a baby at around 28 weeks gestation. As I positioned the baby to take the portraits, I remember thinking to myself, “there’s no effing way anyone could ever convince me that what I’m holding is just a fetus“.

This, was an actual person.

All the parts that a person has.

It wasn’t just a fetus.

During my time as a volunteer with NILMDTS I took portraits of children as young as 18 weeks gestation (twins) to children who died in the womb close to their due date. Yet, whether it was 18 weeks (before the age of viability) or a fully formed baby who died just before natural birth, nothing will ever convince me that one was a “fetus” and one was a “baby”. They were both HUMAN. Some babies were more formed than others, yet no matter which “fetal demise” (a term I’ve grown to hate) I was taking portraits of, it was clear to me that these were real people.

If I wasn’t truly pro-life prior to that experience, I was after.

What I’d love to see would be a more sober approach to the discussion by my pro-choice friends– one that recognizes this is a very serious issue with huge ethical considerations, and something that cannot be reduced to talking points or a shouting match.

What the Pro-Life Movement is Missing in the Discussion

Pro-lifers are also missing some crucial aspects of this issue, and are often radically inconsistent in their professed values, as I’ve said both here on the blog (see 10 Things You Can’t Do and Still Call Yourself Pro-life), and on Huffpost Live (program embedded at the bottom of this piece).

The key item the pro-life side of the discussion is completely missing is that simply passing a law against something doesn’t make it go away. Yet, overturning Roe v. Wade seems to be the go-to solution for the pro-life movement. I believe this approach is short sighted, naive, and not much of a practical solution at all.

In fact, to test how much they actually believe in this logical sequence, one only need to try it in the context of a gun discussion with a pro-lifer (feels ironic to say that). I’ll bet dimes to dollars they immediately reject your logic, and tell you that outlawing guns won’t stop gun violence. Instead, they will argue that we must work to eradicate the reason gun violence occurs in the first place. I often find it strange that the same group of people will simultaneously accept and reject the exact same logical argument. The pro-life movement is seriously missing something.

And here’s what they’re missing: finding a solution to unwanted pregnancies will be a messier, more complex, and more expensive solution than they appear willing to go to. In order to end a practice, one cannot simply outlaw the practice– one must instead undercut the reasons why a practice occurs in the first place. However, it is much easier to pass a law that requires little to no sacrifice on our own part– it allows us to go to sleep with a faux peace that we actually eradicated something. It is such a sad and flawed approach to a very complex issue that involves real people.

That means if the pro-life movement really wants to end abortion they need to stop focusing on winning a legal victory and calling it good. Instead, they need to be willing to look at hard things like poverty, access to affordable healthcare, livable minimum wages, education inequality, etc. As of today, the position is often one where they want women to be forced to give birth to a child, but are completely unwilling to make sure that child and the mother have the things they need to survive. In the current discussion, if one defends the pre-born they’re “pro-life” but if one defends the post-born, they’re a socialist.

What they’re missing is that they seem to care more about the pre-born than the post-born, and this makes them pro-birth, without actually being pro-life. It’s time to be honest that the movement as it has been passed onto us is one that seems to value only one kind of life, and at only one stage of life. It is not, by any stretch, holistically or legitimately “pro-life”.

Why It All Matters

This matters because we’ve been having this discussion for what, over thirty years now? The more important question becomes: has this discussion the way it is currently framed, gotten us anywhere?

If we want to make any headway on this, we’re going to need to have a new discussion entirely– one that fully humanizes all life, and one that radically values the life of the unborn as well as the life of the post-born. Anything short of this new discussion of what it looks like to value life at all stages, will leave us spinning our wheels like the last generation has done.

I believe this next generation can do better.

I believe they’re ready for a new discussion.

And I believe that together, we can find a third way to approach this.

For more of my take on this, see last year’s interview with HuffPost Live: 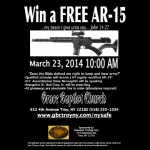 June 4, 2014
When We Give Away Guns In Church: Bad Idea, or Really Horrible Idea?
Next Post

June 6, 2014 10 Things I'd Rather Do Than See The New Left Behind Movie
Recent Comments
47 Comments | Leave a Comment
"Ok, but were the swords Jesus' apostles carried (in the Garden of Gethsemene) metaphorical? Marvin ..."
Cyclovia What Jesus Meant When He Said, ..."
"What harsh reality? Good and evil are human constructs. Period. Only the observer can judge ..."
Marc Wagner If God Is The Cause Of ..."
"K - I completely agree with your observation: Patheos really needs to cease recycling old ..."
justthejanitor1 If God Is The Cause Of ..."
"Sir, that kind of opinion got us where we are today. We are NOT special. ..."
Kyllein MacKellerann Why Every Day Should Be Earth ..."
Browse Our Archives
Related posts from The Official Blog of Benjamin L. Corey