The most common sin mentioned in the Bible is one that we don’t often see in ourselves: idolatry.

It’s not surprising that we rarely talk about it– the sin as we read about it in the Bible is something that so often seems to be a sin that ancient tribal groups struggled with, instead of a real and pressing reality in our own spiritual lives and culture.

After all, we’re not melting down our earrings and making golden calves, right?

It’s easy to see idolatry as something distant. But, what if idolatry were one of the most pressing issues within American Christianity today? I believe it is, and believe this is an issue the next generation must directly and forcefully address if we are to move this Jesus thing forward.

Idolatry is so much more than bowing down to an image created by human hands. The common working definition that most of us may be familiar with defines idolatry as “putting anything in place of, or before God”. In the 10 Commandments, it’s often worded as “You shall have no other gods before me”. God, it seems, wants to have his rightful place in our lives– he wants us to chase after him, and his ways, instead of anything else.

The pressing issue I believe American Christianity must contend with is that we have placed a false god ahead of the God who has his “exact representation” revealed through Jesus of Nazareth: the god of fear.

The idol we’re worshiping may not be as obvious as a giant shiny calf in the middle of the room. Perhaps we’re not having organized worship services to bow down to it. Perhaps we don’t even consciously realize it even exits. Such is the case when we are gently lulled into worshiping the god of fear.

Fear, it seems, has a nasty habit of being more of a dominating force in much of American Christian culture than Jesus himself– and this is straight up idolatry in its purest form.

I think we most clearly see this idolatry and fear-worship in our growing gun culture, of which Christians often are the the foundational support system which props this golden calf up. In the past few years I’ve traveled

extensively, and have had many conversations about American culture with pastors over seas. One of the questions that always comes up is our radical gun culture– it is simply something that most other folks cannot identify with. When I explain that as is often the case, Christians are the ones who promote this pro-gun culture, these pastors either laugh (as if I’m joking) or almost don’t believe me.

Christians promoting a gun culture? Christians outside of American culture, even incredibly conservative Christians, see this as absolute lunacy. Almost too crazy to even be true.

Yet, it is. And, it’s all because instead of worshiping Jesus of Nazareth, we’re opting to worship the god of fear. All idolatry is ultimately rooted in this.

Instead of trusting in God for our safety, we trust in guns. Why? Because we’re scared. Because the way of Jesus seems too illogical to actually be true, and that’s frightening. Because we’re afraid of giving up our rights, afraid of being vulnerable, and afraid that putting our faith and trust in God might actually cost us something.

It’s all fear, fear, fear… and it is causing us to chase after false gods. We know this, because scripture clearly states that when we experience the love of the true God, it “casts out all fear”. As long as someone is living in and serving fear, they are not living in knowledge of God’s love.

I think one of the craziest examples I’ve ever seen was at my previous church. Some of the church wanted to make the church space a gun free zone but encountered immediate push back on the idea, one person even going so far as saying they would quit the church if they couldn’t bring their gun inside. What’s even more sad is our geographical context: rural Maine. Living in Maine is probably one of the safest places you could live– you have a better chance of getting killed by a moose than an armed gunman. What would posses people to bring guns to church is beyond me.

Strike that. It’s not beyond me– I know exactly why it happens: we do crazy things when we worship the god of fear.

Our culture which has for generations been so radically pro-gun that it has opposed any sort of reasonable, middle ground approach on the issue, is now experiencing what Jesus meant when he said: “if you live by the sword you will die by the sword”. We are literally shooting each other on a daily basis to the point that it’s not even shocking anymore. We’ve created a culture that cultivates fear, worships individual rights, and justifies an endless cycle of violence– and now we’re experiencing the consequences of our own sick idolatry.

Just look at what happens after mass shootings: folks get freaked out that someone is going to take away their rights, so they go out and… you guessed it… buy more guns and ammo.

Let me be clear: worshiping the god of fear HAS NOT WORKED. We’ve bowed at his feet, paid him homage, and sworn him our loyalty. And what have we gotten for it?

Not to mention all of the other mass shootings which have become an almost permanent staple of the evening news.

We must repent. We must change the culture. We must refuse to let fear worshipers marginalize Jesus and corrupt Christianity with their false gods and guns.

We must refuse to follow the same idols our fathers and mothers followed, and instead get back to following Jesus.

June 10, 2014
John MacArthur on Having Gay Children: Alienate Them & Turn Them Over to Satan
Next Post 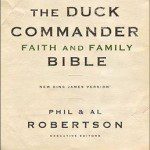 June 12, 2014 When The Bible Becomes Another Way To Spread Your Brand...
Recent Comments
207 Comments | Leave a Comment
"This headline is false. God's word is perfect faithful and true. Stop trying to rewrite ..."
Epiphany Mirabeth No, Franklin Graham, God Didn’t Destroy ..."
"Sounds to me like you are over-interpreting this verse. It's not "a law". It's simply ..."
KraigDeKompressorKruncha The Prosperity Gospel vs. Jesus: Why ..."
"There's a reply below... or however Disqus - may its name be thrice vilified - ..."
Stone_Monkey Why Do Intelligent Atheists Still Read ..."
"I've got this in my documents because it's one of my favorite ones:"Half the people ..."
james warren Why Do Intelligent Atheists Still Read ..."
Browse Our Archives
Related posts from The Official Blog of Benjamin L. Corey

Pence Says Him Testifying Against Trump Would Be...
Former Vice President Mike Pence spoke at a political event in New...
view all Progressive Christian blogs
What Are Your Thoughts?leave a comment
Copyright 2008-2021, Patheos. All rights reserved.
Close Ad