Whole-Life is not Pro-Life, and (Sadly) Pro-Life Means Partisan

My continuing series of posts about young evangelicals, post-partisanship, and social justice has drawn some interesting responses — some thoughtful, some not.  One of the best (in my judgment) comes from Gregory Metzger’s blog, called Faith and the Common Good.  He makes three main points: That I say “again and again” young evangelicals are abandoning an effective voice for the unborn for the sake of “social justice” without providing examples; that I’ve presented my side favorably while distorting the opposing side; and that I’ve reduced the other side to a label they reject.  Most importantly, however, his post presents an opportunity to address an issue that plagues the pro-life movement — the “whole-life” distortion.

Any discussion of partisanship has to start with the cold, hard partisan facts.  In the real world voting for all but the tiniest minority of Democrats means strengthening and protecting the abortion-on-demand regime.  In the real world one party has cast its lot firmly on the side of abortion while the other seeks to protect unborn children.  Let’s contrast the parties’ 2008 platforms.

The Democratic Party strongly and unequivocally supports Roe v. Wade and a woman’s right to choose a safe and legal abortion, regardless of ability to pay, and we oppose any and all efforts to weaken or undermine that right.

Faithful to the first guarantee of the Declaration of Independence, we assert the inherent dignity and sanctity of all human life and affirm that the unborn child has a fundamental individual right to life which cannot be infringed.

Which statement merits Christian support?  Is there a reasonable, scripturally-sound Christian argument that it’s the Democrats’ platform?  Until the Democratic party reverses itself on abortion, any Christian who supports that party with their time, their votes, or their money is as morally responsible for fundamental life-destroying injustice as those Christians who supported the political parties that protected the institution of slavery. 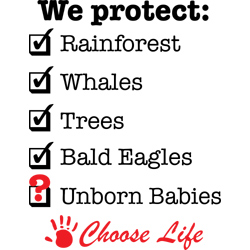 As I’ve argued before, there’s no other issue in American politics of equal moral weight as abortion, and there’s no other issue in American politics where the partisan divide is so stark.  From the environment, to war, to the economy, to entitlements, the differences (while important) are often differences in degree and tactics, not fundamental goals.  Both parties want to protect the environment, both parties prefer peace to war, both parties seek a strong and growing economy, both parties want to accomplish the aims of the Medicare and Social Security programs, and both parties engage in robust intra-party debate on those points.  Yet one party wants to preserve the “right” to pay another person to kill an innocent child for any reason or no reason at all.  The other party wants to preserve that child’s right to life.  The difference is stark.

Now, let’s move on to Mr. Metzger’s points.  First, the desire of many young evangelicals to move beyond the dreaded “single-issue voter” label is well-documented.  They’re pro-life, but they’re also many, many other things — so that the life question becomes just one issue among many.  Metzger’s second point provides a textbook example:

What is interesting about this is that the leading evangelical environmental group espousing the kinds of policies French finds wanting—the Evangelical Environmental Network (EEN)—consistently uses pro-life arguments to buttress their policy descriptions. Far from “throwing under the bus” unborn children (what a terrible image to place on another’s perspective), the EEN has made a point of marshalling its energies around environmental issues that damage the unborn. This is not a convenient fact for French, but it is a major one and it has been the subject of intense debate within the evangelical community (Christianity Today even devoted a special feature to the EEN’s actions so it is not an obscure debate). Perhaps French is completely unaware of this debate, but I find that hard to believe.

Oh, I’m aware of the Evangelical Environmental Network. In fact, I’m very aware of the (generally progressive) argument that you’re not “pro-life” unless you’re “whole-life” — by protecting the environment, easing poverty, supporting education, etc. etc.  But I’m not “pro-life” when I use a low-flow toilet or drive a Prius.  Mr. Metzger’s linked example of pro-life environmentalism is particularly egregious.  The EEN’s commercials were in support of restrictions on coal-fired power plants that were not killing children, and those restrictions wouldn’t have any substantial effect on the very mercury levels they hoped to limit.  That’s pro-life?

The sad reality of the whole-life argument is it’s primarily a weapon of, yes, partisan warfare — a way to shame pro-life activists into silence or a method of diverting their attention from the atrocity of abortion.  It eases a troubled conscience.

Mr. Metzger ends his post by invoking Pope John Paul II as a man who was unquestionably pro-life even as he advanced more liberal views on the environment and war.  I agree with Metzger that the cause of life has had few greater champions than Pope John Paul II.  But the Pope was not an American, and he never had to make the choice that the vast majority of Americans make every four years –to cast a vote for President of the United States (or of course for any other American politician).  Catholics in America actually face the choice their Pope never faces, and those Catholic leaders who take the strongest stands on life are often called — you guessed it — “partisan.”

To say that a Christian should vote to end abortion is not the same thing as saying that Christians must all feel the same about the war in Afghanistan, education policy, deficit spending, or many other issues.  In fact, within the Democratic and Republican parties themselves you’ll often find wide divergence of opinions (ever seen a Ron Paul Republican argue with a Rick Santorum Republican about foreign policy?), but that’s no longer the case on life.  And life is the most important issue of them all.