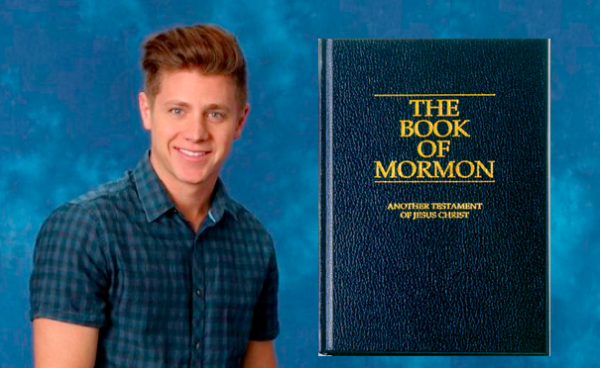 “One F Jef” Holm on The Bachelorette may claim not to be “half Mormon” or even “full Mormon,” but he certainly can quote the Book of Mormon. In a previous post, I wrote about the always awkward “overnight date” card presentation when Emily handed the card to Jef and coyly asked, “What do you think?”

“What do I think,” he asked, a little embarrassed. “I think it would be awesome to forego our individual rooms, but I understand and respect that your daughter and my family will be watching this. They’re involved in this process too.  There’s a time and a place.  I plan on spending every night with you in our own fantasy suite.”

“I’m thankful that you responded that way,” she responded.  “You’re always a gentleman… I want to spend more time with you, but I can’t spend the night.”

Later, they checked out the fantasy suite, admired the romantic set up, and decided it would be the perfect place to spend the night.  However, Jef, explained, “There’s a time and a place for everything.  And right now, it’s time for us to bridle these passions.”

For someone who’s “not a practicing Mormon,” he obviously still retains his moral compass.

However, on Twitter, I was told that this “bridling of passions” phrasing was more than just an aphorism. It apparently has a Book of Mormon origin.

Speicifically, I discovered, it came from the book of Alma, chapter 38 verse 12:

12 Use aboldness, but not overbearance; and also see that ye bbridle all your passions, that ye may be filled with love; see that ye refrain from idleness.

Whatever the original source, I think evangelicals, Mormons, half-Mormons, and Jews can be very thankful that his beliefs and moral standards prevented this.

July 9, 2012
The Top Five Worst Moments of "Overnight Dates" on The Bachelor/ette
Next Post

July 10, 2012 Brad Pitt's Mother Gets Death Threats Over Pro-Romney Letter
Recent Comments
0 | Leave a Comment
"and what makes this even better is that the two girls are sisters http://www.huffingtonpost.c..."
d Black activists cried "racism" over this ..."
"It's heart wrenching to hear about this. Our country is getting more vile and depraved ..."
BlackSun Syndicate Target proudly welcomes men to use ..."
"a wolf dressed as a sheep is still a wolf - if u have a ..."
Aussie In Austin Target proudly welcomes men to use ..."
"I am picturing a little turd in pajamas sipping coffee."
Cantbelieveyouthinkthis Los Angeles Craigslist ad somehow captures ..."
Browse Our Archives
get the latest from
Politics Red
Sign up for our newsletter
POPULAR AT PATHEOS Politics Red
1