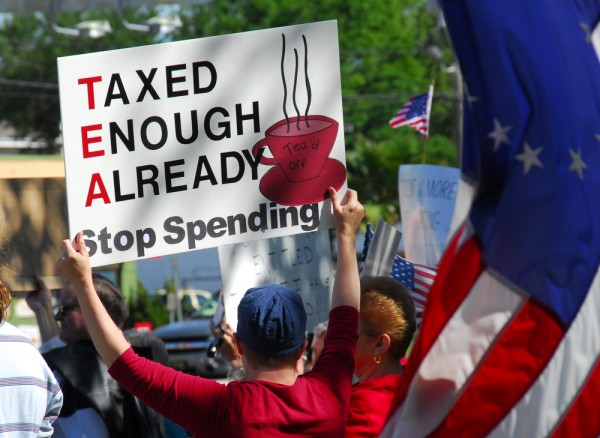 When your name isn’t uncommon, a Google alert can be interesting. Through the wonders of that daily e-mail, I’ve learned about the cool David French (British military historian), the transgender pick-ax-murderer David French, and — yesterday — the National Retail Federation’s Tea Party-insulting David French. As the David French that represents 41 tea-party groups in a lawsuit against the IRS, it was a little jarring getting an e-mail quoting “David French” celebrating the budget deal and saying this: “I think we have all said it. The business community has been uniformly frustrated at how strident the ideological groups have been in defiance of reason.”

Well, shame on you, David French, for perpetuating the slander that the Tea Party is irrational.

It’s not just my evil twin, of course. The Left has long portrayed the Tea Party as nuts, and many Republicans are now slinging the same mud.

For a long time, our culture has allegedly celebrated those who “comfort the afflicted and afflict the comfortable,” or — to use a favorite phrase of the Bush years — “speak truth to power.” Of course the vast majority of that rhetoric was and is a pure sham, the words the cultural elite have used to pat themselves on the back for their own stands — stands taken in the safety of like-minded cultural bastions, invariably to the thunderous applause of their peers.

And so the captain and officers of the ship of state howl and wail and moan at their discomfort – angry at tea-party tactics, shocked at tea-party anger, and puzzled that they’re not trusted to turn the ship from the course they chose.

I fully acknowledge that the process of political and cultural change is both painful and messy. Sometimes rhetoric is overheated, sometimes good politicians are wrongly targeted while true culprits skate by unscathed, and sometimes even the best-intentioned reformers simply make the wrong call about a given bill. But none of that is “crazy.” It’s just human.

Here’s what’s crazy; here’s what’s “in defiance of reason” – that we’ve created a political process so focused on using the power of government to provide financial benefits to the largest number of people (including interest groups like the National Retail Federation) that we’ve made financial promises we can’t possibly keep and that will, if not corrected by reforms that will be painful for millions, lead us to economic and moral ruin.

Here’s what’s also crazy: The idea that the best remedy for this now-generally-acknowledged crisis is to turn largely to the same people who engineered it and beg them to rescue us from the crisis they made.

It’s also crazy to then write off any critique of the political class as “irrational” or “unhinged” unless the critique is delivered according to norms of civility that invariably run only one way and that were utterly inapplicable to our current political class during their own rise to power.

As I’ve said in previous posts, in the battle of ideas, stigma tends to defeat dogma, and the political class — along with allied media — is working overtime to stigmatize the Tea Party into oblivion. But, ultimately, reality trumps talking points, and the “crazy” Tea Party has a much firmer grasp on our fiscal challenge than the political class that scorns them so.