Should Fathers Carry Guns to Protect Their Families? 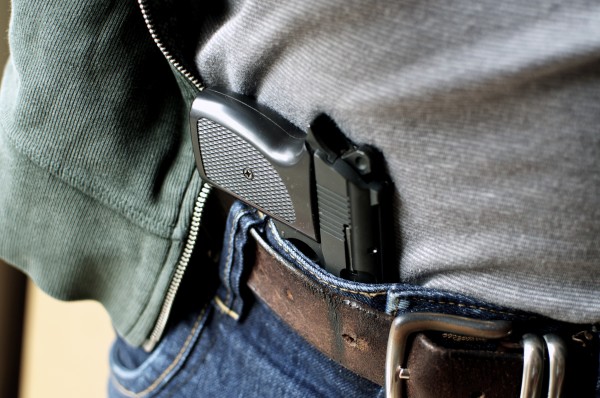 In my experience, those individuals who carry do so because they very consciously do not want to belong to the class of citizens that is inherently helpless — totally reliant upon the state to protect not just themselves but their family, friends, and neighbors. If the choice is between protectors and protected, they choose to be protectors.

This identity is often inseparable from the notion that there is no set of government policies — no utopia — that can eliminate from human society the need for immediate protection. People can and will try to hurt others — using whatever means immediately available — and it strikes us as utterly reckless to be unprepared for this reality.

The protected class has a different view. The protected class is a dependent class — not economically dependent of course, but dependent on the state in perhaps a more fundamental way (for their very lives) – and like members of other dependent classes, they are terrified of flaws in the state’s protective apparatus. Walled off from gun culture, they read the occasional, aberrant story of (legal) gun-owner stupidity or recklessness and cower in fear of a nonexistent threat. (While of course blithely sending their kids off to far more dangerous activities, like swimming in neighbors’ pools or riding in neighbors’ cars).

To the protected class, private ownership of firearms is the flaw in the system that makes them feel vulnerable. It’s the barrier to the safety they crave but can’t provide.

Thus the irreconcilable cultural divide: The very thing that provides security and safety for the gun-owner and his or her family frightens their non-gun-owning friends and neighbors, but the root of the problem is not the gun but the protected person’s very sense of themselves.

Once a non-gun-owning friend asked me to show him my firearms. When I brought out my AR-15 (really a civilian version of the M4), I watched him physically wince, as if the thing itself was radiating some kind of malevolent energy. He sensed a threat. I sensed security.

How can we prevent that wince? That flinch? I’m not sure it’s possible absent a transformation in a person’s understanding of their own identity. Several months later that same friend was concerned that someone might be trying to harm one of his kids, and he knew the police were not — and could not be — omnipresent. In response to perceived danger, his very sense of self changed, and he understood that he had a nondelegable duty to protect his family. So he purchased a Glock and learned how to use it.

Let me close by countering Mr. Frum’s hypothesis with one of my own: “The people who most want to carry are those who most clearly understand their responsibilities to their families, their friends, and their fellow man.” They understand there is a difference between the protectors and the protected, and they don’t want to place their lives in the state’s hands.

February 17, 2014
Tony and Lauren Dungy Reveal How to Have an "Uncommon Marriage" [BOOK GIVEAWAY]
Next Post

February 25, 2014 The Blaze Interviews David French on the EPA's Supreme Court Case
Recent Comments
0 | Leave a Comment
"and what makes this even better is that the two girls are sisters http://www.huffingtonpost.c..."
d Black activists cried "racism" over this ..."
"It's heart wrenching to hear about this. Our country is getting more vile and depraved ..."
BlackSun Syndicate Target proudly welcomes men to use ..."
"a wolf dressed as a sheep is still a wolf - if u have a ..."
Aussie In Austin Target proudly welcomes men to use ..."
"I am picturing a little turd in pajamas sipping coffee."
Cantbelieveyouthinkthis Los Angeles Craigslist ad somehow captures ..."
Browse Our Archives
get the latest from
Politics Red
Sign up for our newsletter
POPULAR AT PATHEOS Politics Red
1

Politics Red
The Scary Stories You SHOULD Be Telling Your...
The French Revolution
TRENDING AT PATHEOS Politics Red