This Wisconsin Teen Could’ve Been Shot Over Politics

David’s latest on National Review is a must-read:

It was still dark outside when “Jonah” (not his real name) heard the pounding on his front door. As luck would have it, he was awake — or mostly awake. He’d gotten up at 4:00 a.m. on October 3, 2013, to see his parents off to the airport. They were leaving on a quick trip to raise money for the children’s charity his father runs. Jonah was 16 at the time, old enough to stay home alone for a short time, but not old enough to deal with what awaited him on the other side of the door.

The pounding continued, and Jonah peered out the window to discover its source. To his horror, he saw uniformed officers, their guns drawn. “Police,” they yelled. “We have a warrant.” An officer shined a flashlight on a document Jonah couldn’t read. Unsure what to do, but unwilling to defy the authorities, he let them in.

Then, they proceeded to turn his house “upside down.”

This story should sound familiar. In April, National Review shared the accounts of three women — Cindy Archer and two others, “Anne” and “Rachel” — who related their own terrifying experiences with dawn or pre-dawn police raids. The police brought a battering ram to Archer’s house, literally watched her dress, and then ran into the bathroom as her partner showered. “Anne” thought for a moment she was facing a home invasion as investigators poured through her front door and screamed taunts in her face. Police followed “Rachel” into the bedrooms where her children slept, where they woke to the sight of armed officers looming over them.

The pretense for the October raids was suspected “coordination” between various conservative organizations and Wisconsin governor Scott Walker’s campaign — activity that a trial court has held constituted nothing more than entirely legal “issue advocacy,” if it even occurred. Because they’d had the temerity to engage in this issue advocacy — constitutionally protected free speech — multiple conservative citizens were subjected to so-called John Doe proceedings by Milwaukee County District Attorney John Chisholm, a Democrat.

A quirky and dangerous Wisconsin legal mechanism, the John Doe proceeding allows, among other things, for expansive and completely secret criminal investigations, supervised not by the citizens of a grand jury but by judges who all too often simply rubber-stamp prosecutors’ demands. As a prominent Wisconsin conservative and political consultant, Jonah’s father was one of Chisholm’s targets.

Bullied by People with Badges in Wisconsin

July 4, 2015
In the Real World, Not Hollywood, the Left Is Close-Minded, and the Right Allows Dissent
Next Post

July 6, 2015 Camille Cosby: "I don't believe in unconditional love."
Recent Comments
6 Comments | Leave a Comment
"and what makes this even better is that the two girls are sisters http://www.huffingtonpost.c..."
d Black activists cried "racism" over this ..."
"It's heart wrenching to hear about this. Our country is getting more vile and depraved ..."
BlackSun Syndicate Target proudly welcomes men to use ..."
"a wolf dressed as a sheep is still a wolf - if u have a ..."
Aussie In Austin Target proudly welcomes men to use ..."
"I am picturing a little turd in pajamas sipping coffee."
Cantbelieveyouthinkthis Los Angeles Craigslist ad somehow captures ..."
Browse Our Archives
get the latest from
Politics Red
Sign up for our newsletter
POPULAR AT PATHEOS Politics Red
1 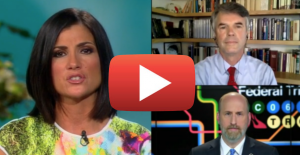