In the Real World, Not Hollywood, the Left Is Close-Minded, and the Right Allows Dissent

In the Real World, Not Hollywood, the Left Is Close-Minded, and the Right Allows Dissent July 4, 2015 Nancy French

David and I have lived two lives.  We are the product of southern towns.  David was born in Opelika, Alabama.  I grew up in Mayfield, Kentucky and then Paris, Tennessee, while David grew up in Georgetown, Kentucky.  Since we’ve been married, we’ve lived in Lexington, Kentucky and now Columbia, Tennessee (Mule Capital of the World!).

But we’ve also lived in the northeastern cities.  We lived in Gramercy Park in New York, in a little apartment from which you could see the Empire State Building if you leaned out the window a bit and used your imagination.  Of course, David lived in Cambridge, Massachusetts when he went to Harvard Law School.  When he taught at Cornell Law School, we lived in Ithaca, New York (where “gender creative” children were allowed to choose their gender 15 years before Bruce Jenner took the plunge). We also lived in Center City, Philadelphia just a few blocks from the Liberty Bell. Here’s David’s observation after living in both very blue and very red areas: “The sushi is better in Manhattan, and the freedom is better in Tennessee.” He writes, in National Review:

My conservative undergraduate institution — Lipscomb University in Nashville, Tenn. — was far more open to dissent, including from angry atheist classmates (yes, I had a few), than was Harvard Law School. No one was jeered, shouted down, or threatened at Lipscomb. No one called future employers of atheist or liberal students to try to get job offers canceled. Professors didn’t scream at dissenting students, and activists didn’t plaster photoshopped, pornographic pictures of liberals all over campus walls. At Harvard, all those things happened — to conservative students.

My relatively conservative Kentucky law firm employed people of every ideological stripe, and we engaged in robust (and almost always friendly) discussions of virtually every kind of cultural and political topic. The firm’s pro bono work veered both liberal and conservative, depending on the views of the individual lawyer. When an LGBT activist complained to the managing partner of the firm about my conservative advocacy, she was shut down by a simple statement: “I’m running a law firm here, not the speech police.”

My Manhattan law firm, by contrast, performed only one kind of pro bono service: liberal. Political debates were virtually nonexistent in the workplace, but political conversations happened all the time. The overwhelming liberal majority expressed themselves freely, while the very few conservatives remained silent. Dissent was decidedly not welcome.

Even the conservative churches I’ve attended have been more ideologically diverse than the two major liberal campuses where I either attended (Harvard Law School) or taught (Cornell Law School). Indeed, the numbers demonstrate the truth of my anecdotal experience, with self-professedEvangelicals more politically diverse than not only Ivy League faculties but entire, allegedly “diverse” Northeastern cities. In other words, you’re more likely to hear a meaningful debate between people of fundamentally different political opinions in a church pew than in New York City.

He also goes on to say:

These two cultures create a reality that is exactly the opposite of that portrayed in Hollywood, according to which people always escape smaller towns and cities for the “broader horizons” of New York, San Francisco, and Los Angeles. Yet it’s not small-town America that’s narrow-minded. Our great cities embrace a curious and constricted kind of diversity, in which people of all races, sexual orientations, and personal proclivities are celebrated and embraced — so long as their minds belong to the collective.

I’m thankful for having lived in both areas, and I love darting up to New York to catch a play or grab great dinner.

But I’m also thankful to be raising my children in a more open-minded area than Manhattan: Columbia, Tennessee.

July 3, 2015
This is the Best Time to be an American - When it Matters
Next Post 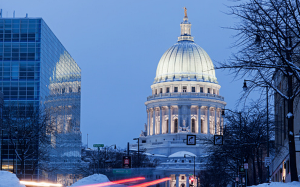 July 6, 2015 This Wisconsin Teen Could've Been Shot Over Politics
Recent Comments
5 Comments | Leave a Comment
Browse Our Archives
Follow Us!