Why Are Police Officers In Public Schools? Because of Lousy Parents

If you watched the news last week, undoubtedly you heard about the policeman suspended for forcibly removing a young black girl from her seat after she refused to listen to her teacher’s request to leave the classroom.  Oh, and she hit the policeman in his face.

David begins by stating the obvious:

Let’s begin with a point of agreement: Ideally, no one wants cops in schools.

A law-enforcement presence, by its very nature, introduces criminal law and criminal penalties into the kinds of altercations and disruptions that used to be dealt with entirely through in-house school and parental disciplinary processes. I still vividly remember the day when my father grabbed me by the arm — after receiving a note from my teacher that I’d been involved in a fight with the same kid on consecutive days — marched me over to the kid’s house, and then hashed it all out with his father, man-to-man. The dads agreed the fighting had to stop, pledged to punish us more severely than the school ever would, and — suddenly — peace reigned on the playground.

So how did we go from the days where parents sorted out these types of conflicts to today where policemen are forced to do so?  David writes:

But in all too many public schools, parental involvement simply isn’t an option. As one inner-city public school teacher told me, in her first four years of teaching elementary school, she could count the number of intact, mother–father households on the fingers of one hand — and those parents weren’t even married. Very few parents bother to show up for parent/teacher conferences, and the interactions are often dominated by angry threats to sue for various perceived slights. Lousy parenting leads to horrific, often violent child behavior — and even seasoned teachers can be shocked and frightened when classroom incidents spiral out of control.

Just as I can vividly remember what it’s like to have parents fix school-discipline problems, I can also remember the moment in my high school when the police took control. A fight broke out during my senior year, a brawl so violent that teachers — even football coaches — were knocked to the ground and thrown against lockers. Students scrambling to get out of the way slipped on the bloody floors, and chaos reigned until first the sheriff and then the state police arrived in force. For the next week, we walked the halls with police officers in every corridor, and we were grateful for their presence.

Read David’s full article to learn what he thinks it will take to get police out of schools. 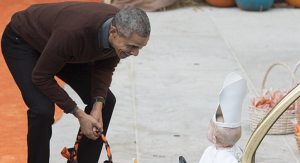 November 1, 2015
Military Families Trick or Treat at the White House: What Candy did the President Give Them?
Next Post