Monica, Mothers, and the Maniturgium

The Church today celebrates the feast of St. Monica – mother of the great Saint Augustine.  Many of us know the story of Monica – a devout woman who desired nothing more than to see her son converted to Catholic-Christianity.  Through her prayers, tears, and example Augustine as we all know eventually converted and is today one of the great saints of our Church.

I couldn’t help but think of Monica’s motherhood and her role in the life of her son.  Her story brought me to think of my own mother and by extension the mothers of priests everywhere.  The mother of a priest is a special person – she nurtures a vocation from the very beginning.  Just as our Lady nurtured our lord from the beginning so too does the mother of a priest nurture the vocation of her son.

Because of the role of the mother of a priest in her son’s vocation and formation the tradition of honoring her at the first mass of her son arose.  The newly ordained presents to his mother the maniturgium.  Msgr. Charles Pope Blogged on this topic a while back – he said the following:

“What,” you may ask, “Is the maniturgium?” The manutergium (from the Latin manu+tergium = hand towel) was a long cloth that was wrapped around the hands of the newly ordained priest after the Bishop anointed his hands with the sacred Chrism (oil).  The purpose was to prevent excess oil from dripping onto vestments or the floor during the remainder of the ordination rites. (In the picture to the right, the newly ordained priest has his hands wrapped with the manutergium).

The use of the maniturgium was discontinued in the current Rite of Ordination. Currently, the newly ordained steps aside to a table after his hands are anointed and uses a purificator to wipe away any excess oil. While it is not technically called the manutergium nor is it exactly the same in design or usage, (for the hands are not wrapped by it), nevertheless this is still a cloth used to wipe away the excess Chrism (oil).

maniturgium redivivus! In recent years many newly ordained have carefully set aside these purificators in a bag with their name on it so that they may retain this purificator and present it to their mother. The same word has been retained for the cloth (manutergium).

According to tradition the maniturgium is placed around the hands of the mother of a priest as she lies in the coffin.  When she arrives to the gates of heaven she is escorted directly to our Lord.  Our Lord says to the woman – “I have given you life, what have you given to me?”  She hands him the maniturgium and responds, “I have given you my son as a priest.”  At this Jesus grants her entry into paradise.

I write all this to simply say that a man does not become a priest on his own. His family accompanies him on the journey to the altar.  Monica accompanied Augustine to conversion and ultimately to sainthood by her prayers and tears and example.

It is often said that vocations don’t come from the clouds – they come from families. 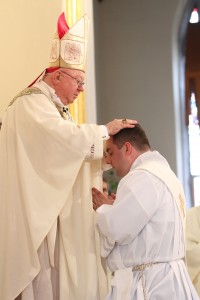 Catholic
My first anniversary as a priest - a...
Fr. Michael Duffy 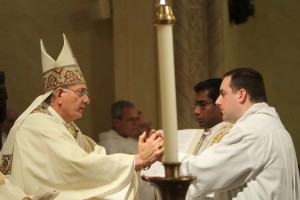