Most of the time, when I’m watching a movie or TV show, I can see right through it. I catch the foreshadowing and can predict what’s coming (and sometimes dialogue—which means that it must be pretty poorly written). I have worked in pastoral ministry for almost 20 years. That means that I should be able to see a lie coming from a mile away.

But, last week’s episode of Doctor Who, “The Witch’s Familiar” had my poor brain in a tizzy. I should have seen through Davros’ act—he even gave himself away early in the conversation when he called “compassion” in the Daleks a “defect.” He told The Doctor that compassion “grows strong and fierce in you like a cancer” and that it “will kill you in the end,” to which The Doctor replied, “I wouldn’t die of anything else.” “You may rely on it.” Davros warned. I mean, he completely laid it out there. He said it flat out. Could he have been more obvious?!

Initially, using a tactic that would have worked on himself, Davros tried to tempt The Doctor to touch the cables that would suck his regenerative power out of him by making him think that he could wipe out all of the Daleks. He didn’t succumb. So, when that didn’t work, like the super-evil villain that he is, Davros changed gears and went for what he sees as The Doctor’s greatest weakness (and just went on and on about it!)—his compassion. He cried! He asked to look into his face like a dying family member would request. He asked if he was a good man! He flattered him! He even made a joke, for crying out loud!!!

And all the while, I found myself in the midst of an interior struggle—he’s Davros—he’s pure evil! But, I’m Catholic! No one is pure evil—everyone can be redeemed! But, there will be more shows—if Davros turns good what will become of the best monsters of the Doctor Who canon? He’s so twisted and corrupted—he can’t be good! But, everyone can be good! Seriously—being Catholic makes being a sci-fi fan exhausting.

Of course, Davros is just as evil as he claimed to be earlier on. It was all a trick to save himself and the other Daleks. But, as with most supervillains, Davros’ selfishness grew into hubris, which always brings destruction.

Compassion made The Doctor (and me) gullible…vulnerable. But, vulnerable does not necessarily mean weak or ineffective. Compassion might have duped The Doctor for a little while, but it made him better; stronger. And in the end, when Missy tried to trick The Doctor into killing “the Dalek who killed Clara” (which was Clara in a Dalek can)—it was mercy and compassion that made him level-headed and stayed his hand, ultimately saving Clara.

So, is compassion worth the roller coaster? Is it worth getting duped and made vulnerable? Is it worth dying for? The Doctor thinks so. Jesus thought so. And so do I.

Jen Schlameuss-Perry is a writer of blogs and short stories and currently works for the Catholic Church. Check out more of her work at: www.catholicinklings.com or on Facebook.

October 15, 2015 Horror: A Natural Genre For Catholics
Recent Comments
0 | Leave a Comment
Browse Our Archives
Related posts from The Rogue 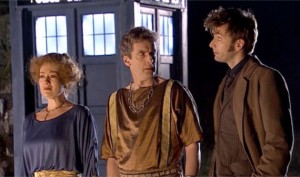