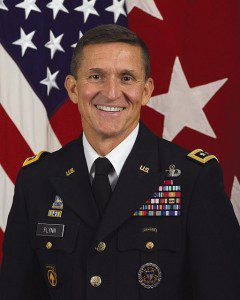 Michael Flynn, President Trump’s national security advisor, has resigned.  He was caught negotiating with the Russian ambassador over sanctions before taking office.  It is illegal for a private citizen to do so.  Flynn also lied to Vice-President Pence about it.

The pressure for him to leave evidently came from Trump himself.

From Flynn resigns amid controversy over Russia contacts – CNNPolitics.com:

His departure came just after reports surfaced the Justice Department warned the Trump administration last month that Flynn misled administration officials regarding his communications with the Russian ambassador to the United States and was potentially vulnerable to blackmail by the Russians. The move comes less than a month into the job, making him one of the shortest-serving senior presidential advisers in modern history.

The sudden exit marks the most public display yet of disarray at the highest levels of the new administration, which has faced repeated questions over a slew of controversies and reports of infighting among senior aides during its first three weeks.
The shakeup now leaves Trump without one of his closest and longest-serving advisers. Flynn had counseled Trump on foreign policy and national security matters since early in the 2016 presidential race.
Flynn was not able to definitively refute a Washington Post story late last week that his conversations with Russian Ambassador Sergey Kislyak included communication about the sanctions. It is illegal for unauthorized private citizens to negotiate with foreign governments on behalf of the US.