The other version of the new Luther movie

The other version of the new Luther movie April 13, 2017 Gene Veith 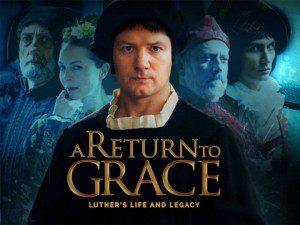 I reviewed Martin Luther:  The Idea That Changed the World, the dramatized documentary produced in Lutheran circles to commemorate the 500th anniversary of the birth of the Reformation.  It turns out that there is another version of the same project, Return to Grace:  The Life and Legacy of Martin Luther.

The latter, which has a much better title in my opinion, is the version being promoted and screened by the Wisconsin Evangelical Lutheran Synod (WELS).

Why the two versions?  Is WELS, known as a stickler for fellowship issues, holding to some kind of “cinematic fellowship” as one Cranach commenter called it?  This provoked quite a bit of discussion in the comments to my review here at the blog and even more on Facebook.

First of all, the WELS version does NOT leave out scholars from the liberal Evangelical Lutheran Church in America (ELCA).  Nor does it leave out the interview with the Catholic archbishop Timothy Dolan.   This is evident from the trailer, which you can see here after the jump.

It was said that the WELS version cuts out many Lutheran Church Missouri Synod scholars from the original film, but in the trailer the LCMS is represented.

After the jump, I’ll explain what I have found out so far about why there are two versions.

Return to Grace is apparently a different editing.  There is always more footage in a film than can be used for a movie that has to be a particular length.  In the credits, the list of interviewed contributors showed more names than actually appeared.  At the screening I attended of The Idea That Changed the World, I was told that a longer version existed that would be mainly used by seminaries.  (Which means that there must be a third version out there!)  I gather that the WELS version includes more from Wisconsin Synod seminary professors (who ARE in the other version too).

The ELS theologian David Jay Webber, whom I think highly of, said on FaceBook that the WELS  problem with the Idea That Changed the World had to do with its presentation of Luther as a reformer of all of Christendom and for its emphasis on Luther’s cultural influence.  WELS thought the former was too ecumenical and the latter too secular, wanting to present Luther instead as the founder of confessional Lutheranism.  Rev. Webber hadn’t seen either movie and was offering his opinion on why the movie would have its own WELS version, not giving any kind of official or inside knowledge.  But what he says makes sense.

Of course, Luther was the catalyst for other kinds of Protestantism.  And he did have an enormous cultural influence.   But he also formulated a distinct Biblical theology different from the others.  And his cultural influence is often distorted by secular scholars, as we have been chronicling here.  (Luther as the founder of individualism?  Of personal conscience over authority?  etc.)

Another issue for me, ex-Literature professor that I am, is the original intention of the movie’s creators.  That should count for something.  What did the writer and the director create with their film?  I am astonished that a film could be re-edited and re-titled and released in two or more versions in accord with the desire of different sponsors.  A movie is supposed to be a work of art, not just a vehicle for various “messages” from its various sponsors.

The film is said to have been produced for PBS.  Which version will be shown on public television?  Will there be a separate PBS version for secular sensibilities?

I wish we could have an official explanation from the producers and sponsors of why there are two different versions of the movie.

In the meantime, see either one or both, as you can.

April 13, 2017 A church with its own police force
Recent Comments
0 | Leave a Comment
"You know, you had a point until you talked about the "riff-raff that attended public ..."
DC Kurtz Vocation and America’s Unwritten Constitution
"Since I got my government sponsored vaccination, I felt safe to travel on government built ..."
DC Kurtz Vocation and America’s Unwritten Constitution
""the riff-raff that attended the local public schools". SNOB"
Bernard Dainton Vocation and America’s Unwritten Constitution
"While I appreciate your contributions to many of the discussions, you'll forgive me if this ..."
VDMA Animals’ Sexual Rights
Browse Our Archives
get the latest from
Cranach
Sign up for our newsletter
POPULAR AT PATHEOS Evangelical
1