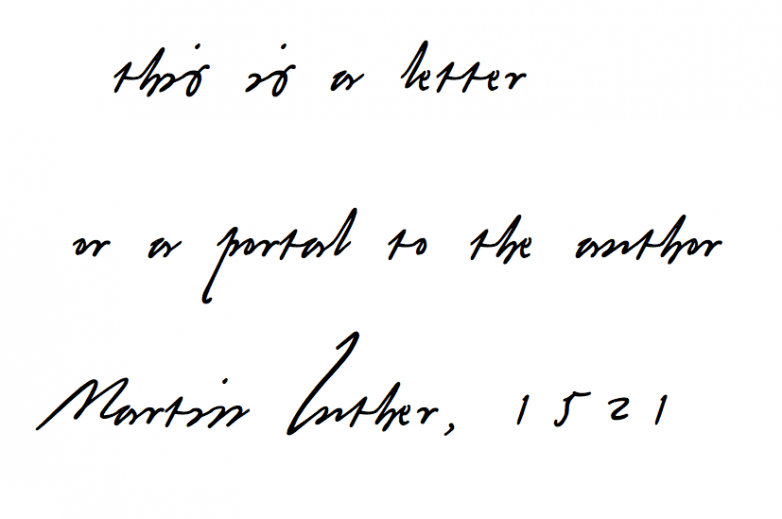 I was approached by Harald Geisler, a German typographer, who told me about his project.  I’ll let him explain it:

I am a typographer specialised in handwriting working in Frankfurt am Main Germany.  A backer of my recent typography project and apparently avid reader of your writing, recommended me to reach out to you to help spread awareness of my current crowdfunding campaign. The work is about creating a typeface based on Martin Luther’s handwriting to use on the computer. My goal with this project is to open through the aesthetic of handwriting and typography a door to encounter the historic figure and content of the reformer Martin Luther.

Herr Geisler, who has already created fonts based on the handwriting of Sigmund Freud and Albert Einstein, is raising money for this project from Kickstarter.  If you pledge as little as $12, you will receive the complete font to install on your computer.  If you pledge more, you will get even more goodies.  (If he doesn’t raise enough money, you won’t have to pay whatever you pledge.)

I will explain why this is so cool.  First, watch this video from Herr Geisler:

A person’s handwriting is very personal and very revealing.  To read a handwritten manuscript is to get closer to the person of the author and to the immediate historical act of the writing.  Putting my literary historian hat back on, the challenge of reading manuscripts from the past is not just the language but the handwriting of the time.  The field of paleography–learning to decipher writing systems from the past–is a fascinating discipline in itself, and it is necessary even in reading manuscripts from fairly recent history (such as Civil War letters and America’s founding documents).  To have a font based on 16th century handwriting would be an an excellent introduction to Renaissance paleography.

And in this age in which cursive script is not even being taught in many of our schools, Luther’s handwriting also exemplifies calligraphy:  beautiful writing.  And Luther’s distinct and personal style shows his sense of beauty–as in my continuing series of reviews of Mark Mattes’s book on Luther’s aesthetics–which is not mere formalism, but rather makes room for individual expression and playfulness.

Here is some of what Herr Geisler has learned about Luther’s handwriting, as he expresses in an interview:

When you make a font you said that you learn the movement of the person. What is the feeling of Martin Luther’s “hand” or movement when writing? Have you gained any insight to him, as a person or thinker? . . . .

To think about Martin Luther’s handwriting, one has to keep in mind, that at the time, writing was an elite activity. It was also mainly a holy activity. In terms of the movement, it is a bit early in my research to say. Perhaps – It is very controlled. Very much about readability. And it’s a practice or craft, in which one can see characteristic distinctions from other handwriting at the time. One surely finds an expression of Luther in the handwriting, but the way to express oneself is of a quality, that I am still looking for words to describe. . . .

I have the feeling in general that now that people learn writing in school, that it is about efficiency. But in Martin Luther’s time, there is more space for enjoying writing and beauty. Today a beautiful handwriting would be very regular. But then, there seems to be more exceptions— maybe more fun, in how to form the letters. They are not necessary flourishes, but less efficient marks. It is controlled, to be clear, but not to be efficient. In that way, it is a little more free.

The handwriting of the theologian of freedom is “a little more free”!

Herr Geisler was kind enough to let readers of the Cranach blog download a prototype of the font–it only contains these letters:  M a r t i n u s L h e r o p l – a few numbers and the comma and period.  (Future fun Cranach activity:  Who can create the best sentence from those 15 letters?)

What can you do with a Luther font on your computer?  Write your own 95 theses?  Write messages to friends who also have this font?  Make really authentic-looking Luther quotes for your church bulletins and newsletters?  Have a unit on paleography for your children or students, in which they get to use the writing themselves?  In my case, I plan to just amuse myself by playing with the font.

To download this partial font for your computer, go here.  If you would like it for an iPhone or iPad, go here.

For more explanations, information, and pictures–including a great deal of information about Luther’s handwriting–go here.

Now I don’t usually publicize Kickstarter initiatives on this blog, but I am making an exception for this one.  I regret that there is less than two weeks for the pledges to come in.  The deadline is Wednesday, December 27, 2017, at  10:06 AM CST.  So, as they say, act now!

Freud and Einstein got their fonts funded from kickstarter, so Luther deserves no less.

The Luther fan who has everything does not have this!  So make a pledge so as to get the font, and to help the font get constructed.  I did.

This would make a good Christmas present for the Luther fan who has everything, a pledge in his or her name.  Print out one of the images of Herr Geisler’s website and stick it in a card.  (You may want to get that Luther fan another present too, just in case this one falls short in the crowdfunding.  Again, if there are not enough pledges to fund the project, you don’t have to pay your pledge.)

So go to the Kickstarter page, Here I Write, and be a part of this project.

Image, “this is a letter or a portal to the author, Martin Luther 1521,” and video used with the permission of Harald Geisler. 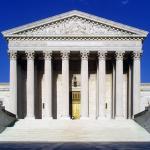 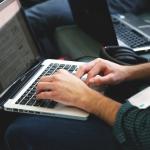 December 18, 2017 My New "Publications" Page & an Interview with the Author
Recent Comments
0 | Leave a Comment
Browse Our Archives
Related posts from Cranach