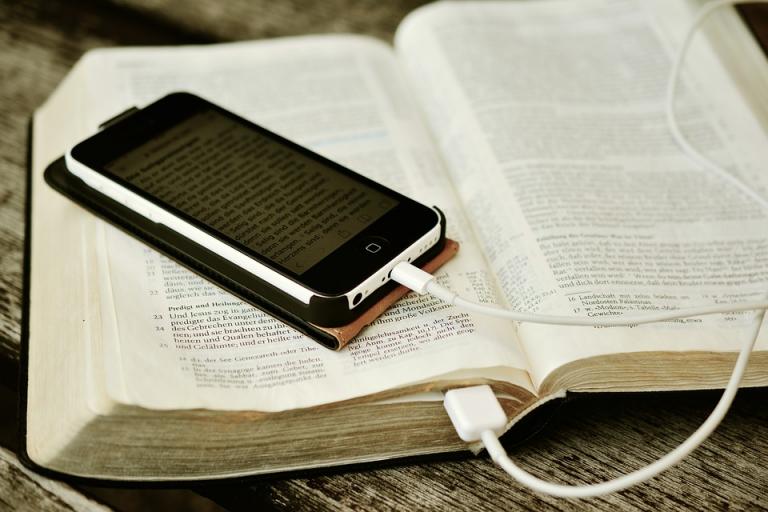 First the Bible was read from long, continuous hand-written scrolls, one for each book.  Then pages were invented, and the new book-form of the codex made it possible for the still hand-copied and illuminated texts to be bound together in large volumes while making it easy to find specific passages.  Then the printing press was invented and the codex form could be mass-produced and made available to all.  Now we can read Bibles on electronic screens, whether on e-readers, computers, or smart phones.

Does it make a difference?  Do we read the Bible in a different way on an electronic screen as opposed to a printed book?  The codex arguably made Bible scholarship and theological proof-texting easier.  The printing press put the Bible in the hands of virtually everyone, making possible a widespread personal piety based around reading God’s Word in which the laity of all backgrounds could participate.  Will today’s digital Bibles likewise change the way we interact with God’s Word?

Pr. A. Trevor Sutton–my co-author on Authentic Christianity:  How Lutheran Theology Speaks to the Post-Modern World–is studying issues like that in his academic work, which specializes in the effects of our new information technology.  Thus, our book gets into issues having to do with the new technology, its cultural impact, and what that can mean for Christians.

Trevor has just published a piece at the Gospel Coalition entitled The Brave New World of Bible Reading.  Here is the opening.  Read what he has to say–it isn’t long–and then I want to offer some thoughts:

I was teaching a class and asked for someone to read a Bible verse. As soon as the student had opened his Bible app and located the verse, his digital tablet—and Bible—died. This declaration made me realize we are living in a brave new world of Bible reading.

The digital age is doing some curious things to the Bible. Not only can modern Bibles “die” because of low batteries, but they can also speak, search, share, notify, and hyperlink. It takes two taps to tweet text from Titus. It is normal to announce to an empty room, “Alexa, add blueberries to my grocery list and read Esther chapter four.”

Social media, smartphones, and new media are changing everything, including how we interact with the Bible. The digital age has created a cornucopia of new opportunities for us to read, mark, learn, and digest the Word of God.

The pioneering media scholar Marshall McLuhan, who died before today’s Information Technology got going but whose predictions are remarkably prescient, said that the transition from print to electronic media (he was thinking mainly of television) would result in a kind of reversion to the pre-printing press era.  That culture was more visual and less word-oriented, favoring immediate and often emotional reactions, as opposed to the long, rationally-connected train of thought that printed books made possible.

The new media seems to favor shorter texts.  When I read the Bible on my phone, I tend to focus on little snippets–such as those daily readings YouVersion puts out, limiting my attention to what is on the little screen.

My e-reader is good for longer readings, whether of the Bible or other books.  But I have trouble reading scholarly, technical, or in-depth texts like the Bible on screens when I need to study them.  I can’t easily page back and forth, re-reading, paging through material from indexes, and–importantly for me when I am thinking about what I am reading–underlining passages.

Actually, following McLuhan’s dictum, my e-reader is like a reversion to the scroll.  No pages makes it hard to find things.  My e-reader is an improvement over the scroll because it is searchable, so it is possible to look up texts according to key words.  The online Bible resource Bible Gateway works like the ultimate concordance.  But I find it hard to read extensively on Bible Gateway, though it is certainly possible.

I think the great gift of the Digital Bibles is that they can spread the Word of God everywhere, around the world and in every language, including in nations where Christianity is persecuted and Bibles are forbidden.  As the article I link to says, even impoverished people in the “developing world” tend now to have smart phones.  The Word of God is no longer necessarily bound up in a physical object that must be smuggled and that persecutors can burn.  It can just be downloaded.

Perhaps the Digital Bible, existing in the form of electronic information in the Cloud, may promote a “spiritual” view of Scripture, though perhaps at the risk of the hyper-spirituality of Gnosticism rather than recognizing the sacramental dimension of the Bible with its physical paper and ink.  But I see no reason why Digital Bible reading need result in a lower view of God’s Word and its authority, but people will probably become more oriented to Bible-verse proof-texting rather than sustained study of Scripture.

I don’t know.  What do you think?  What has your experience been with the Digital Bibles?

Isn’t it true that the Holy Spirit can work by means of the Word of God, whether it is inscribed on a scroll, a codex, a printer’s sheet, or an electronic screen?

By the way, Trevor has another piece at the Gospel Coalition entitled What Luther Would Say to Silicon Valley, which brings vocation into the issue of information technology.  We blogged about an earlier version of that piece, but I’m glad Trevor’s work is getting broader exposure. 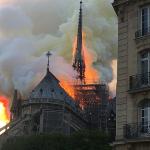 April 22, 2019
Notre Dame and the Two Kinds of Secularism
Next Post 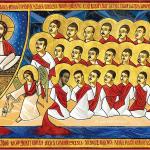