Giving Thanks and Saying Grace

Today is Thanksgiving, a day, by definition, to give thanks.  And our exercise of gratitude centers around an abundant and delicious meal.

We give thanks before this meal, as many of us do before every meal.  In fact, 50% of Americans “say grace” of some kind before meals, which is a larger percentage than go to church.

That’s a factoid from an article on the phenomenon by Emily Heil of the Washington Post entitled Saying grace: How a moment of thanks, religious or not, adds meaning to our meals.

She quotes people who used to not bother but then started the custom, in both cases cited through the influence of one of their children.  Said a 38-year-old father:

“It’s just been lovely. I really dig the way it creates a structure. . . .Everyone has to get to the table and be together and not be distracted. We focus on where we are. . . .It creates a grounding feeling – a moment of stillness. . . .I feel like our dinners at home are much better now – like, ‘Now we are together, and this is what we’re doing.'”

She also quotes experts on the value of this practice.  For example,

To [Kenneth] Minkema at the Yale Divinity School, grace serves several purposes. Reciting the same words together or participating in a regular ritual creates a feeling of connection with those around us, he says. “It serves to strengthen and confirm the bond of family or community,” he says. “It helps to acknowledge that we are one.” And across religions, it is also an acknowledgment of the source of the food before you. “There is the creator/God but also other people, the earth, and the moral responsibilities that go along with that,” he says. “It also has a way of pulling you inward and reminding you of those responsibilities.”

Thus, saying grace is a liturgy, which turns the family into a congregation.
Furthermore, giving thanks at meals has to do with that favorite theme of this blog, vocation.  According to that important but oft-neglected Christian doctrine, God gives His gifts by means of human beings.  He gives us our food by means of farmers, harvesters, truck drivers, warehouse workers, grocery store stockers, our own jobs that enable us to buy our food, and, to use a phrase that often crops up  in mealtime prayers, “the hands that prepared it.”  So in thanking God, we are expressing gratitude for everyone who works together for our sustenance and acknowledging God’s providence in and through them all.

The article goes on to survey the different forms that “saying grace” takes–traditional Christian prayers, informal spontaneous prayers, the practices of other religions, and secularized versions, such as the company holding hands and each saying for what and to whom they are grateful, with no reference to God at all.

I was gratified to see that the Lutheran common table prayer–“Come, Lord Jesus, be our guest/And let thy gifts to us be blest”–made the article, as something a non-Lutheran evangelical family has started to say.  When I became a Lutheran, I considered that prayer to be a nursery-rhyming children’s kind of prayer, and a poor substitute for a personal spontaneous prayer (that is, the so-called ex corde prayer).

But now I appreciate that simple prayer.  It opens with the penultimate verse of the Bible  (Revelations 22:20), invokes Christ’s presence with us (a very Lutheran emphasis that also speaks of vocation in the family), acknowledges that the things we eat are Christ’s “gifts,” and asks for a blessing on the meal.  That is a dense lot of profound praying in that little rhyme.

What we usually do is for one person, usually me, to pray ex corde for specific petitions and thanksgivings, and then all join together in the “Come, Lord Jesus.”

Actually, the old practice–still held to by a number of people I know–is to pray twice for your meal.  The first time to bless the food.  And the second time to give thanks for what you have eaten.

This is enshrined in the prayers that Luther gives in the Catechism, which I recommend highly, especially for special occasions like Thanksgiving:

The children and members of the household shall go to the table reverently, fold their hands, and say:

The eyes of all look to You, [O LORD,] and You give them their food at the proper time. You open Your hand and satisfy the desires of every living thing. (Ps. 145: 15–16)

Then shall be said the Lord’s Prayer and the following:

Lord God, heavenly Father, bless us and these Your gifts which we receive from Your bountiful goodness, through Jesus Christ, our Lord. Amen.

Also, after eating, they shall, in like manner, reverently and with folded hands say:

Give thanks to the LORD, for He is good. His love endures forever. [He] gives food to every creature. He provides food for the cattle and for the young ravens when they call. His pleasure is not in the strength of the horse, nor His delight in the legs of a man; the LORD delights in those who fear Him, who put their hope in His unfailing love. (Ps. 136:1, 25; 147:9–11)

Then shall be said the Lord’s Prayer and the following:

We thank You, Lord God, heavenly Father, for all Your benefits, through Jesus Christ, our Lord, who lives and reigns with You and the Holy Spirit forever and ever. Amen.

[Note the expression of the children in this painting, yearning for the invention of the “kids’ table.”] 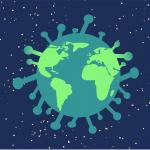 November 24, 2021
The Consequences of Plagues and Pandemics (part 2)
Next Post

November 26, 2021 Single Christians Are Increasingly Celibate
Recent Comments
0 | Leave a Comment
Browse Our Archives
get the latest updates from
Cranach
and the Patheos
Evangelical
Channel
POPULAR AT PATHEOS Evangelical
1