When Evangelicals Were Considered Too Progressive

When Evangelicals Were Considered Too Progressive November 30, 2021 Gene Veith 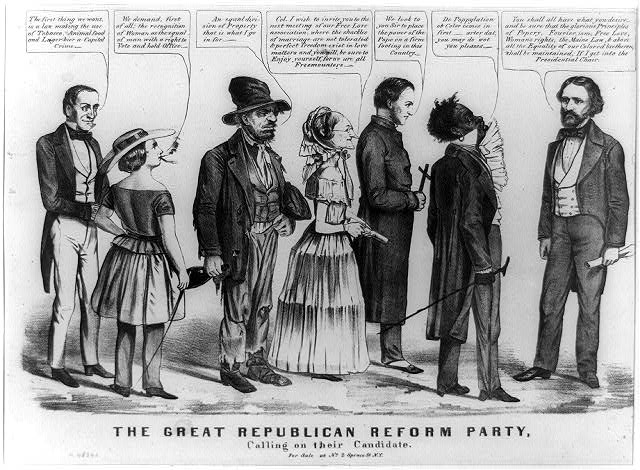 Evangelicals today are tarred with the brush of right wing conservatism, seen by many as the loyal henchmen of Donald Trump and the opponents of progressive social change.  But in the 19th century, evangelicals had the opposite reputation, condemned by many as the promoters of dangerously progressive and socially disruptive reforms.

That is the takeaway from a fascinating article by historian Joseph Zeitz on the controversies over Abraham Lincoln’s proclamation establishing the Thanksgiving holiday.  In the article, entitled  When People Thought the First Thanksgiving Was Too Woke, Zeitz describes how the holiday was received in the context of the Civil War, in which the national polarization was even more intense that it is today:

For years, many Southerners and pro-slavery Northerners had pilloried the Republican Party as an organization of religious fanatics bound by a commitment to extreme and even (for the time) zany evangelical reform movements — in the words of Sen. Stephen Douglas of Illinois, “the black republican army is an allied army, composed of Know Nothings, Abolitionists, Free Soilers, Maine Liquor Law men, woman’s rights men, Anti-renters, Anti-Masons, and all the isms that have been sloughed off from all the honest parties in the country.” While some of these movements strike the modern reader as incongruous, in the antebellum era, some of the strongest advocates of abolition and women’s rights also wanted to restrict immigration and impose sobriety on a nation of heavy drinkers. Race — the debate over slavery and abolition — was always at the center of the political debate. But it intersected with a broader array of cultural concerns. . . .

It became increasingly popular for administration critics to lump the offending religious reform movements under the moniker of “Puritanism,” given the central role that New England played in organized abolitionism. It made little difference that Puritanism bore nothing in common with evangelical Christianity, either intellectually or theologically. By 1863, the term had become a political descriptor, devoid of its original meaning. The Republican Party, as one Confederate political cartoonist portrayed it, was built on the foundation of “PURITANISM,” supported by pillars that included “WITCH BURNING,” “SOCIALISM,” “FREE LOVE,” “SPIRIT RAPPING,” “RATIONALISM” and “NEGRO WORSHIP.”

Puritanism, said influential Peace Democrats like Clement Vallandigham and Samuel Cox, was the origin of all the “isms” that had propelled America to war.

There is a lot to think about here.  Ironically, Democrats were the ones who opposed the evangelicals both then and now.  And back then Republicans were very much the party of social reform and, as they are today, was identified with religious-motivated voters.  Over a century and a half, we have seen quite a bit of political and ideological realignment, and not just with religiously-motivated voters.

Also, the basket of causes includes lots of seemingly incongruous beliefs.  We must keep in mind that the opponents of Christian activism back then are not necessarily fair and accurate in their charges, any more than they are today.  (Accusing the  “Puritans” of fostering “free love” seems like quite a stretch, but so does accusing modern-day Christian conservatives of “insurrection” and “fascism.”  Although “free love” was an issue with the new so-called “libertarians,” as the explanation of our illustration shows.)  Interestingly, the Christian activists back then were associated with the evils of “rationalism,” whereas today the New Atheists accuse them of “irrationalism.”  And promoting restrictions on immigration was an issue for evangelicals both then and now.

It was true, though, that the Christian activists of the 19th century promoted the abolition of slavery, giving women the vote, and other social reforms (labeled here “socialism”), all of which were quite progressive.  In fact, another prominent and related cause,  the prohibition of alcohol, was also considered to be politically progressive.  (In fact, some progressives are coming to the same conclusion today.  See this article:  Maybe Prohibitionists Were the Good Guys.)

The point is, it isn’t just that Christian political activism has changed:  progressivism and conservatism have changed.  And today’s categories don’t really apply to the fairly recent past.  Was Lincoln a liberal or a conservative?  The question is meaningless.  One of the most radical 19th century reformers was William Jennings Bryan, today known mainly for his opposition in the Scopes trial to the teaching of Darwin’s theory of Evolution.  And, it has been argued, that today’s progressives are today’s  “Puritans.”  Indeed, the New England Puritans were the ones who adopted the “social gospel,” which became a dogma of mainline liberal Protestantism but would be the antithesis of the evangelical understanding of salvation.  But in the 19th century, these different strains had not yet gone their separate ways.

There are different ways of drawing the lines.  They keep shifting over time.  And they will shift again in the future.

Christians should probably avoid committing everything to a transient political philosophy as applied to a transient temporal situation.  But standing up for transcendent moral principles–for example, opposition to slavery and opposition to abortion–is an obligation in every age.  That might be interpreted in different ways in different times–one would think that being pro-life is a progressive position–but that shouldn’t matter to the Christians.

Illustration:  “The Great Republican Reform Party, Calling on Their Candidate,”  [click link for the explanation and identification of the cartoon] via Picryl, Public Domain

December 1, 2021 “He refused to be called the son of Pharaoh’s daughter”
Recent Comments
0 | Leave a Comment
Browse Our Archives
get the latest updates from
Cranach
and the Patheos
Evangelical
Channel
POPULAR AT PATHEOS Evangelical
1