Years ago a Haitian pastor asked me, “Why do white people hate children?”

When I told him that we do like children, most of us anyway, unconvinced he asked, “Then why do you work so hard not to have them then?”

It’s a good question, one that I know my liberal friends would answer like this: “We like to plan on having them, we want to give them the best lives possible.”

I know my Haitian friend would not have been moved my that. He had five children and at the time they were living on one side of a duplex (which he owned). The unit couldn’t have been more than 800 square feet. (I know because I helped to renovate it after a fire.) My wife taught his girls piano, and we’ve followed their progress over the years. The kids turned out great, not because of the sorts of things liberals plan for, but because he is a dedicated patriarch (yes, his wife is a wonderful mother too), and because of a strong household religion.

Utopians really have a tough time living with kids. Their utopias generally treat them as a problem, something to plan for, not something central. There’s Plato to start with, but it just keeps on going. I’ve written about the Shakers and their antipathy toward the natalist household.  (That’s why they’re not with us anymore.) And that’s really why all these utopian schemes fail, they’re just not into procreation. They resent it, they’re anti-creation. I suppose these is something beautifully apropos to the term utopian then.

There has been an attempt to reinterpret Christianity along progressive utopian lines. (You can read about it on the Progressive Christian channel here at Patheos.) But it reminds me of Jefferson’s bible. There’s not much Bible left when you cut out all the procreation language. There’s all the fertility talk for one thing, then gestation, birth, nurture, then discipline (of children that is), and inheritance. Now all of this presupposes a few things: one, children are a good thing; two, households are centered on the care of children, and three, Christianity somehow reflects all of this child-centeredness.

Liberals want to make Christianity all about self-actualization and a just world. The questions begged here are pretty significant. One of them is the whole matter of justice–it leaves nature out of the definition. And then there is the place of the household, where is it? It is reinterpreted. Households become voluntary associations, not the foundation of a social order. But that’s not Christianity, that’s something else.

This brings me back to the household codes. Children are told to obey their parents, and here’s why:

Children, obey your parents in the Lord, for this is right.  “Honor your father and mother”—which is the first commandment with a promise— “so that it may go well with you and that you may enjoy long life on the earth.” Ephesians 6:1-3

Somehow the welfare of children is bound up with the welfare of parents and vice versa. They participate in each other’s lives in such a way that not only do they share physical DNA, they share all things. Attempts to slice this all up, to set children against parents and parents against children, ends in death. It is the way of isolation and sterility.

Liberals tend to think of analogies as arbitrary human creations, things that reflect the interests and aptitudes of the people who invent them. But according to the traditional Christian view this is precisely backward. True analogies are not human creations, they’re images of divine realities, and they’re given to us for our good. And this is why they work at so many levels.

Not only are children good for us, we’re good for children, and all of this reflects something  big. Procreation is an image of the new creation. Christians are God’s children, both born into his household and joint heirs along with the Son of God. God’s Son participated in our death in order that we can participate in his life.

I’m not sure how “liberal Christians” can speak about these things in other terms. And apparently, neither do they.

If you think I’m politically incorrect for saying this, wait until you hear what I have to say about wives.

November 1, 2016
Tolkien's Leaf by Niggle: What Will Become of Our Work?
Next Post 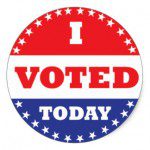 November 8, 2016 Being a Pastor on Election Day
Recent Comments
0 | Leave a Comment
Browse Our Archives
Follow Us!