What Happened at the Secret Synod Planning Session?

What Happened at the Secret Synod Planning Session? May 27, 2015 Thomas L. McDonald 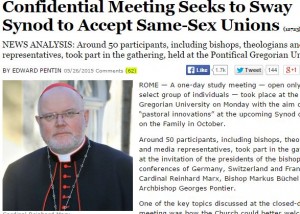 Edward Pentin has done some first rate reporting on the factions forming to push through radical change in the Church’s unchangeable moral teaching. He has a new story in the National Catholic Register* about a secret meeting that took place at the Pontifical Gregorian University on Monday with “the aim of urging ‘pastoral innovations’ at the upcoming Synod of Bishops on the Family in October.”

Around 50 “bishops, theologians and media representatives, took part in the gathering, at the invitation of the presidents of the bishops’ conferences of Germany, Switzerland and France — Cardinal Reinhard Marx, Bishop Markus Büchel and Archbishop Georges Pontier.”

It’s fairly clear that this was a strategy meeting for people aiming to change Church teaching on divorce and homosexuality at the upcoming Synod. And they didn’t like it when Pentin found out about the gathering, which was open only to hand-picked, friendly media:

No one would say why the study day was held in confidence. So secret was the meeting that even prominent Jesuits at the Gregorian were completely unaware of it. The Register learned about it when Jean-Marie Guénois leaked the information in a story in Le Figaro.

Speaking to the Register as he left the meeting, Cardinal Marx insisted the study day wasn’t secret. But he became irritated when pressed about why it wasn’t advertised, saying he had simply come to Rome in a “private capacity” and that he had every right to do so. Close to Pope Francis and part of his nine-member council of cardinals, the cardinal is known to be especially eager to reform the Church’s approach to homosexuals. During his Pentecost homily last Sunday, Cardinal Marx called for a “welcoming culture” in the Church for homosexuals, saying it’s “not the differences that count, but what unites us.”

Cardinal Marx is also not alone, among those attending the meeting, in pushing for radical changes to the Church’s life. The head of the Swiss bishops, Bishop Büchel of St. Gallen, has spoken openly in favor of women’s ordination, saying in 2011 that the Church should “pray that the Holy Spirit enables us to read the signs of the times.” Archbishop Pontier, head of the French bishops, is also known to have heterodox leanings.

The meeting’s organizers were unwilling to disclose the names of everyone who took part, but the Register has obtained a full list of participants. They included Jesuit Father Hans Langendörfer, general secretary of the German bishops’ conference, who has been the leading figure behind the recent reform of German Church labor laws to controversially allow remarried divorcees and homosexual couples to work in Church institutions.

There’s a lot more, so read it all.

It’s possible the talk of same-sex union support is just a feint to cover the push to readmit divorce and remarried people to communion. Even the most rabid progressives can’t imagine the Church would change the prohibition on homosexual acts. (Just so you know where I stand on this: I would back some revisions to the way annulments are handled, but readmitting the divorced and remarried to communion is a non-starter. “Gay marriage,” being an ontological impossibility, doesn’t even rise to “non-starter,” and anyone who attempts to justify it is a theological illiterate.)

What Pentin’s reporting has shown is an ugly heterodox underbelly that is threatening to throw the Church into schism. They’re emboldened by rhetorical incaution on the part of the Holy Father and the presence of known dissenters in his inner ranks. I do not believe they will succeed, but I do think they will continue to sow dissent and confusion that damages the Church.

All of these pipers play the same tune, urging us to “read the signs of the times” and change truth. Being truth, of course, it cannot change. It can merely be denied and abandoned by cowards who choose to be led not by the Heiligen Geist (Holy Spirit), but by the Zeitgeist (Spirit of the Age). That Zeitgeist is the voice of the devil.

I think the heterodox are a minority and will be defeated in October. I do not believe we are heading for schism. Pentin’s own reporting indicates that the European bishops are hardly a monolith. And as the growing and conservative global south asserts itself, the chances for a radical change in teachings will be less likely. Smiling on divorce and gay marriage will not fill the pews. In fact, it would empty them even faster. See also: every other Church that did it.

Perhaps the dissidents are pressing now because they feel they have the wind at their back with the current papacy and the lack of a clear “Third World” (for lack of a better descriptor) block among the bishops. It’s just possible that their reckless actions will cause that block to form, and lead the global south to speak as a single, clear, prophetic voice in favor of the unchanging truths of the faith.

*Disclosure: I write for the Register.

May 29, 2015 ISIS Is Destroying Ancient Palmyra
Browse Our Archives
get the latest from
Catholic
Sign up for our newsletter
POPULAR AT PATHEOS Catholic
1

If Any Drug Tested on HEK-293...
Through Catholic Lenses
Related posts from God and the Machine