Sexist Assumptions and the Difficult, Dirty Work of Grace 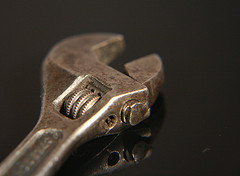 My husband was deep into a bathroom remodeling project when he asked me to stop by the home improvement store to grab a faucet connector. He had purchased the wrong size on his previous trip, and I was out running errands anyway.

A young female employee met me in the plumbing section. I tried to decipher the details from my husband’s text but couldn’t figure out what the succession of measurements meant. The employee didn’t know either, so I called my husband to confirm.

After I hung up, the employee shook her head: “Don’t you love how men send their wives out to do their dirty work?”

I was momentarily confused. Clean and decently dressed, I sipped a latte in a relatively quiet store while my husband banged on pipes and collected plaster dust in his pores. He had been averaging about five hours of sleep a night, skin cracking and knees creaking, because he was determined to finish the bathroom before the end of spring break. He had already installed a double sink to accommodate our tweens’ preening habits and gifted me with a whirlpool tub for my evenings of poetry and wine. The dirty work was certainly his.

The woman’s comment not only made me bristle because of her false assumptions—that my husband lolled in front of the TV with his hands in his pants while barking orders—but because it diminished me as well.

By tearing down my anonymous husband, the woman presupposed my inadequacy. Every time we attempt to prove that a man is a somewhat lesser parent or partner, we reinforce that a woman needs that extra boost to stay smart, responsible, and independent. By privileging the woman at the expense of her husband, we assume her inferiority.

It’s all around us. The “man cold.” The clueless dad haplessly putting diapers on an infant’s head and exploding mac and cheese in the microwave when his wife goes out of town. I met a woman whose husband was recovering from surgery. “You know how they are,” she said, rolling her eyes. “They whine about any kind of pain.”

I thought about my husband, who had survived a severe injury or two, several kidney stones, and the Ironman triathlon without so much a peep. And I just shrugged.

This time, I couldn’t stay quiet. “Well,” I said to the woman at the home improvement store. “He’s actually stuck under a sink. Working.”

She said nothing, and I didn’t expect her to. She seemed young and new to the position, searching the aisles with me to find the right parts. I know she wasn’t really trying to degrade my husband; she didn’t know him, of course. She was trying to find some common ground to speak from, some woman-to-woman small talk. It could have just as easily been a comment about the spring weather. Or my shoes. Or perhaps it was merely a way for her to buy some time, since she couldn’t find the three-eighths-inch compression inlet by half-inch female iron pipe outlet by thirty-six-inch flexible braided polymer water connector either.

So how should I have responded? If I had called her out directly on her sexist comment, she may have gotten defensive or wilted in her failure to provide excellent customer service. And as a result, I would have felt guilty, too, and nothing would have changed. If I had agreed with her, however, I would have compromised my true reaction to a comment that reflects our society’s need to diminish one to elevate the other.

Is there any way to win?

The best solution, it seems, is to somehow respond without violating the ethics of the situation, the good faith in which the comment was spoken. The goal isn’t to take a stand or to ignore the comment but to turn the conversation into something positive.

If I tell a woman with a “whining husband” that mine is a badass who can handle all manner of pain and suffering, I’m passing judgment on her. If I proclaim boldly that fathers are parents and not childcare workers, I come across as self-righteous. However, I can take a moment to uplift a situation in order to redeem it—in this case, to share that I was serving my husband, confusing as his text was, so that he, in fact, could serve me.

A year ago, several writers and I spent a weekend at a Catholic retreat center. An older woman who worked in the kitchen asked my poet friend, Susanna, if her husband was “babysitting.”

The word makes me bristle when used in the context of husbands. I could tell Susanna, too, was simmering inside. But she took a deep breath and responded with something like this:

“Yes he is. And he’s so good at it that I’m not even worried about being gone. We share parenting pretty evenly. He’s so invested. And I love seeing him with my boys.”

The woman nodded and smiled, maybe a bit surprised, but looking genuinely interested in Susanna’s life and perspective. She had probably never had a conversation like this. With just a few gracious sentences, Susanna had affirmed the woman’s question, praised her own husband, reminded herself of her own joy, and taught the woman something about gender equality.

Later, Susanna told me she had felt “a little livid” inside when the woman made those stereotypical assumptions. But she exchanged offense for compassion and anger for gratitude.

And that, after all, is what we are called to do: the difficult, dirty work of grace.

Photo above credited to Kate Ter Haar and used under a Creative Commons license.

April 28, 2015
Death Comes for the Deconstructionist: An Interview with Daniel Taylor
Next Post

April 30, 2015 Jesus and Legos in the Deep, Part 1
Recent Comments
0 | Leave a Comment
""Aural" refers to hearing, "visual" to seeing"
merphd The Gutenberg Imagination
""It doesn’t matter when you start the Sinatra Christmas playlist or put up your tree. ..."
C_Alan_Nault How to Win the War on ..."
"Yup."
Max Marvel Finding My Inner Calamity Jane
"I an confused by the use of "aural" here: "In The Gutenberg Galaxy, he explained ..."
William G II The Gutenberg Imagination
Browse Our Archives
get the latest from
Catholic
Sign up for our newsletter
POPULAR AT PATHEOS Catholic
1