Wills Point, Texas – GFA Special Report (Gospel for Asia) – Discussing the troubling problem of open defecation and the lack of basic sanitation for millions throughout the world.

Another key dilemma in this discussion—open defecation, hardly a dinner-table topic or a mission committee agenda item—is the fact that accessibility to toilets does not always indicate usage. Changing habits is mostly a matter of changing mindsets in the face of the stranglehold of deeply entrenched beliefs.

“You see that?” he asks. “One hundred thousand is the number of villages that are ODF today.” (ODF is the acronym for open defecation free).

What drives all this magnitude of interest, field research, consortiums and consultations on sanitation/water projects, awarding of grants and money prizes? Disease—plain and simple. Both waterborne and airborne.

Elizabeth Royte, who is a sanitation expert traveling widely and reporting extensively, summarizes that “Modi aims to build more than 100 million new toilets in rural areas alone by 2019.” But she notes that “deep-seated attitudes may present an even bigger barrier to improving sanitation than a lack of pipes and pits.”

That being said, let’s first look at the data regarding the state of toilets and open defecation in Asia. Then let’s examine what development organizations, sanitation technologies and mission groups, namely Gospel for Asia, are attempting in order to help Asia become ODF.

Starting with a global overview, key facts regarding sanitation highlighted by the World Health Organization are:

of the people who make up the world population use managed sanitation not serving other households, with systems in place to safely dispose or treat excreta (2015).

people worldwide still do not have basic sanitation facilities.

of the population is thought to consume food irrigated by wastewater

people still defecate in the open.

deaths annually (estimated) are caused by sanitation deficient environments, which is linked to transmission of diseases such as cholera, diarrhea, dysentery, hepatitis A, typhoid, polio, intestinal worms, schistosomiasis, and trachoma.

Now, while Modi has emphasized improved sanitation, it’s worthwhile to note that India has been struggling with these issues even before winning independence from Great Britain in 1947. In fact, Gandhi insisted, “Sanitation is more important than temples.”

Now, however, due to population growth, a conundrum exists: While the percentage that practice open defecation has dropped substantively, birth rates are creating an environment where more people live in geographic locations where fecal exposure is increasing, not decreasing.

What Do the Sanitation Problems of the World Have to Do with Us?

For those of us with indoor flush toilets—and clean ones at that—with sewer lines that carry waste to treatment facilities, for those of us who live in places where waterborne and airborne bacteria are not a hazard, our response to the crisis of sanitation in the world is probably, So what? We don’t say this out loud, but like so many other dire extremes jockeying for our attention, it doesn’t really touch our lives.

However, in a majority of places, America, as has been noted, is starting to suffer from failing infrastructure. Most of us think of that in terms of roads and bridges needing repair or major overhauling, a transportation issue. Recently, reporters from the Chicago Tribune conducted an exposé of the high bills being charged for water in underserved neighborhoods around the city. Maywood residents in a western suburb pay one of the region’s highest water rates. This is simply because older pipes allow major seepage.

Of the 946 millions of gallons that Maywood bought from neighboring Melrose Park in 2016, some 367 million gallons, or 38.7 percent, never made it to taps, costing residents in an already cash-strapped population nearly $1.7 million more than residents would pay in other towns of similar size. And the poor are tapped for a disproportionate share of the bill as compared to what wealthier users in tonier neighborhoods pay. The tax rates of the poor do not allow for major infrastructure overhauls.

“What if I had to stand in line to use a communal latrine where flies buzzed, the floor was filthy, someone had evacuated due to acute diarrhea, and no one wanted to clean the mess? Now we’re getting closer.”

Water problems may be closer than we think. Cheryl Colopy in her article titled “How No-Flush Toilets Can Help Make a Healthier World” makes the point:

“In the United States, sewage treatment has not been a problem for the past half-century, but it could become one again as infrastructure ages and fails—especially if there is a lack of government money to replace it. In addition, certain regions of the U.S. are expected to experience water shortages as temperatures rise. New, water-saving, decentralized toilet technologies may need to be adopted not only in places like South Asia, but also in parts of the industrialized world.”

Indeed, we may be thinking about sanitation issues more in the near future than we ever thought plausible. Indeed, the burgeoning technologies used to solve defecation problems and to discover clean water solutions in the developing world may be solutions we also will seek not far down the road.

Women are prone to assault, disease runs rampant, and lives are at risk: all a result of using the bathroom outdoors.

To read more on Patheos on the problem of open defecation, go here. 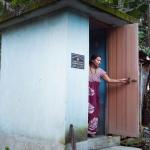 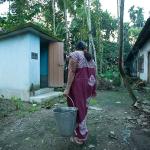