Gospel for Asia Calls for ‘Compassionate Prayer’ After Jade Mine Disaster

One of the world’s leading mission agencies has called for “compassionate prayer” after more than 160 people were killed by a horrific mudslide at a jade mine in northern Myanmar earlier this month.

Several Christians living in a nearby village work at the jade mine, but fortunately no one from the local church was reported missing or dead, Gospel for Asia (GFA World) said.

The pastor said several of his church members were late going to work and missed the landslide. Now he’s ministering to bereaved families, comforting them and praying for them, Gospel for Asia (GFA World) said.

According to news reports, a massive river of mud and rock triggered by heavy rains swept into the mining site, burying workers and people scavenging for precious stones. A state official described it as “like a tsunami.”

Graphic images showed rescue workers pulling bodies from the debris and laying them in rows under tarp.

“Our heartfelt prayers are with the families of all the workers who died in this terrible disaster as well as the injured,” said Gospel for Asia (GFA World) founder Dr. K.P. Yohannan. “The people of Myanmar are among the most kind-hearted and loving on the planet. Right now, we can lift them up to our Lord Jesus in compassionate prayer.”

The disaster — which occurred on July 2 in the Hpakant area of Kachin state — was captured on video, showing the mudslide pouring into the mining site.

On a typical day, hundreds of people gather at the site to sift through rubble looking for precious jade stones. Myanmar — formerly known as Burma — is the world’s biggest source of jade.

Right now, heavy monsoon rains are lashing parts of northeast India — another area prone to disastrous flooding and potentially deadly landslides. Since May, catastrophic floods have killed more than 80 people in the region, and 2.5 million have been forced to flee their homes.

The deadly flooding comes as India faces a spike in COVID-19 cases. The South Asian nation — the second most populous country in the world — now has more than 1.1 million recorded COVID-19 cases, the third highest after the U.S. and Brazil.

Gospel for Asia (GFA World) is a leading faith-based mission agency, helping national workers bring vital assistance and spiritual hope to millions across Asia, especially to those who have yet to hear about the love of God. In GFA World’s latest yearly report, this included more than 70,000 sponsored children, free medical camps conducted in more than 1,200 villages and remote communities, over 4,800 clean water wells drilled, over 12,000 water filters installed, income-generating Christmas gifts for more than 260,000 needy families, and spiritual teaching available in 110 languages in 14 nations through radio ministry. For all the latest news, visit our Press Room at https://press.gfa.org/news. 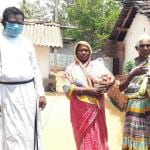