Madchen wasn’t earning enough as a laborer. As hard as she tried, the mother of two couldn’t meet the needs of her family. Madchen struggled to provide for her sons and fix their home—all of which she did alone.

Providing for Her Family

Madchen’s husband had passed away years ago, leaving her to provide for their two sons alone. Whatever work she could find, Madchen took, but her earnings were only enough for the bare essentials. Providing her family with any nutritious food or making sure they could get medical treatments when needed were out of the question.

By the grace of God, a Christian family hired Madchen after noticing her plight and offered to help the struggling widow. Now, Madchen was able to raise her sons and provide for their basic needs.

“Do not worry, just believe in God,” the family said, encouraging Madchen. “He will provide all your needs.”

Madchen saw the love of God through the family’s loving words and their provision. Their example of God’s love for the poor and weary touched the widow’s heart—God knows her troubles and sees her burdens. Madchen embraced that love, fully accepting it into her heart.

Given a Sewing Machine, a Future

As the years passed and Madchen’s sons grew older, their needs grew too. Madchen found her finances stretched thin as she raised her sons to adulthood, even with the extra help she received. The widow looked for additional ways to earn money, but no other avenue appeared.

By divine providence, Gospel for Asia (GFA) Sisters of Compassion happened to meet Madchen. After talking to her, the sisters discovered Madchen could sew clothes. They took this knowledge back to their leaders and continued to minister to Madchen.

Sometime later, Madchen received a sewing machine. Finally, after 26 years of struggling to earn a livable wage, this gift will allow Madchen to earn enough money as neighbors, friends or others in the community take their sewing needs to the widowed mother. Additionally, Madchen can teach her daughter-in-law to sew, which will offer additional income to the family.

To learn more about the impact of how sewing machines are helping families and how you can help, click here. 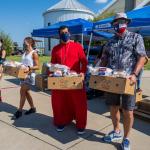