WILLS POINT, TX – Gospel for Asia (GFA World and affiliates like Gospel for Asia Canada) founded by Dr. K.P. Yohannan – Discussing Rasa, her depression, shame and rejection from her own family, and the deliverance that walked into her life, a GFA missionary who shared Christ’s love. 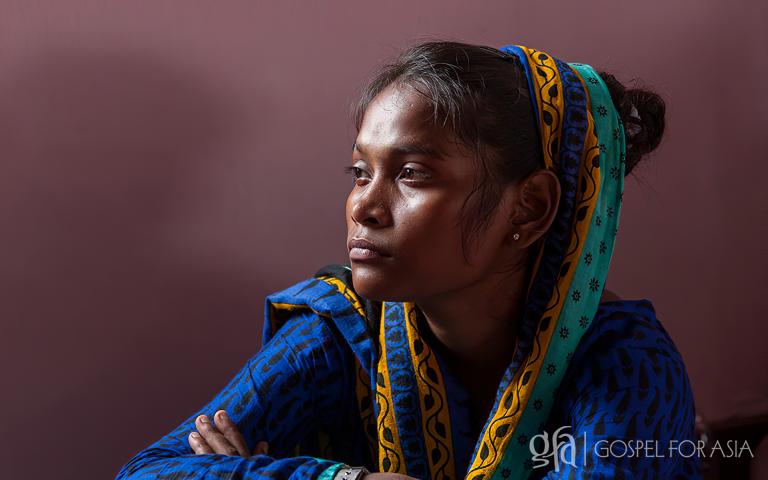 Rasa stood in shame in front of her parents listening to the angry, disappointed words falling from their lips. How could she, their eldest daughter, engage in a secret romance with a village boy and bring disgrace to their family?

Rasa’s parents forbade her to ever leave the house alone again. She had lost their trust—and, it seemed, their love.

Rasa’s home life had seemed good. Her family successfully farmed their land and lived a well-to-do lifestyle. She had completed 12 years of studies—something only one in three children accomplish in low- and middle-income countries —and enjoyed modern conveniences in her home, which many in her nation don’t have. But life became grim after her family discovered her undercover relationship. They continually scolded her, and her father even hit her.

Rasa’s parents took their daughter to a temple and performed a ceremony over her to try to break off her attraction to the young man. But Rasa’s young heart still longed for the boy. Hatred toward her built up within her family members, and Rasa withdrew into angry silence. Eventually, they locked her away in her room.

“I was left alone and did not get any love from anyone,” Rasa says.

Shame and rejection whirled within Rasa. One day, she attempted to end her life. Someone managed to save her, but Rasa did not want saving. She wanted relief. So later, she tried again—and was rescued again.

Rasa’s agony continued. Finally, she tried to commit suicide a third time, and again someone saved her. Her life was in shambles, and it seemed there would be no escape.

Then deliverance walked into Rasa’s house one day when GFA missionary Imani visited Rasa’s family. Sister Imani greeted Rasa’s mother, Kalani, and because Imani was a woman, Kalani welcomed her into the home despite her husband being absent.

When Imani inquired if everyone in the house was present to hear some important news about Jesus, Kalani replied that one daughter suffered a sickness and was alone in her room. Hearing this, Imani offered to pray for the girl’s healing. Kalani then revealed the sobering situation the family faced and explained why Rasa was confined to her room.

Imani spoke with Rasa’s mother and siblings for a long time and heard about all their problems. She realized the young daughter carried deep hurts and had many problems—she was desperate enough to attempt suicide three times—but Imani believed Jesus could work beautiful healing in Rasa’s life. Confident in Christ’s power, Imani extended a generous offer: If Rasa and her parents consented, Rasa could stay in Imani’s home for a time to receive counseling and guidance.

“Will you go with Sister Imani?” Kalani questioned her daughter, unknowingly speaking words that would forever change the course of Rasa’s life.

Rasa immediately agreed. She did not know what it might be like to live under the care of this new woman, but she wanted anything that would get her out of her current situation. Three days later, Imani returned, and after being granted full permission to counsel Rasa according to God’s wisdom, she brought her new charge home.

Ministering to the needs of girls and widows was nothing new to Imani. She had been serving in this village for 15 years as a GFA missionary, speaking words of life and teaching women vocational skills such as sewing clothes and making kitchen utensils out of coconut shells. Imani and the troubled girl developed an especially close bond, however. Although Imani had never married or had children, she showed Rasa the love and kindness of a mother.

Rasa’s relationship with Imani brought hope to the girl’s life, and she gradually walked away from her past problems and decided to pursue a better life. She accompanied Imani in her ministry, meeting many people and even learning to sew clothes. Rasa also participated in daily times of prayer and scripture reading, and through them, she learned about the God whose love is unconditional. Slowly, she started a relationship with Jesus, and she found inner peace and comfort in Him.

At the end of one month, Rasa asked Christ to live in her heart. Thoughts of suicide no longer gripped her—she was free and spotless in Jesus, and shame had lost its hold on her. She was a new creation. Instead of hiding her past, she began sharing her story to testify to others of Christ’s life-changing power.

“Now, I have a loving mother and also a church family to take care of me,” Rasa says of her new friend Imani. “I thank the Lord Jesus for saving me.”

Two months after Rasa went to live with Imani, she returned home to visit her family. Her parents greeted her with amazement. Their daughter was smiling. They could see love and joy in her countenance. How could this be?

Sister Imani explained to them how Jesus’ unfailing love had transformed Rasa and how her life now serves as a testimony to everyone.

Rasa’s parents wept. Their daughter who needed someone to rescue her from death three times now wore a hopeful, joyous expression; their girl who earlier had brought shame to their family was now a good example to others. Jesus had done amazing things in their daughter’s life.

Rasa’s parents wept. Their daughter who needed someone to rescue her from death three times now wore a hopeful, joyous expression.

Then they remembered how they had mistreated Rasa, and they felt deep remorse over their actions. That day, love within their family was restored.

Although Rasa reconciled with her family, she decided to continue living with Imani instead of moving back home. She wanted to keep learning about the God who received her when her family had rejected her—and help Imani bring others the hope that rescued her.

Imani showed Rasa a path to life in Jesus, and she helped Rasa understand God loved her when it seemed no one else did. Now, Rasa is in true fellowship with God and with her family, and she is helping Imani carry God’s message to others.

The message of God’s forgiveness and unfailing love is desperately needed around the world. According to the World Health Organization, there are as many as 16 million suicide attempts each year. Millions more don’t attempt suicide but are burdened by discontentment and grief. Each person on the brink of choosing death over life has unique situations and sorrows, but in Jesus, they can find acceptance and abundant life.

You can help send a GFA missionary like Imani to people in Asia who are on the brink of hopelessness. Your gift of any amount will help bring news of God’s unconditional love and healing to those who need it most. Donate today and help point people to a path that leads to life!

September 25, 2020 How a Goat Brings Blessing
Recent Comments
0 | Leave a Comment
"Very wonderful website. As I look back over the decades of my life with KP ..."
Bill Bray Gospel for Asia Celebrates as Bride ..."
"Such a pathetic story about Bani and Kripal, and off-course about God's divine visitation when ..."
Sunday Ubah How Gospel for Asia Goats Fixed ..."
"Yes, but according to the lawsuit settlement agreement signed by both parties, “All funds designated ..."
Randall Mains Gospel for Asia Becomes a Tool ..."
"Didn't Gospel for Asia got sued for lying to donors on where their money is ..."
Christian Gospel for Asia Becomes a Tool ..."
Browse Our Archives
get the latest updates from
What Motivates Us.
and the Patheos
Evangelical
Channel
POPULAR AT PATHEOS Evangelical
1

What I Learned from Designing Women...
Anxious Bench
Related posts from What Motivates Us.