WILLS POINT, TX – GFA World (Gospel for Asia) founded by K.P. Yohannan, has been the model for numerous charities like GFA World Canada, to help the poor and deprived worldwide, issued this second part of a Special Report update on Malaria making a comeback amid the worldwide impact of the COVID 19 Pandemic.

Progress Ebbs and Flows in the Fight to Beat Malaria

Recent developments in the fight against Malaria have placed a heightened spotlight on World Malaria Day, observed on April 25. Fortunately, despite the high death toll and other troublesome signs lately, not all the news about malaria treatment is bad. There are gains amid the setbacks.

One positive example is Myanmar, where the annual malaria death toll of 3,800 a decade ago has decreased to approximately 170. The Global Fund to Fight AIDS, Tuberculosis and Malaria credits the efforts of 17,000 community volunteers who provide rapid testing and treatment, with serious cases referred to health facilities. Volunteers also educate the public through national antimalaria campaigns.14 Unfortunately, it’s unknown if the recent military coup in Myanmar will adversely impact the recent progress it’s achieved in the prevention of malaria.

News of another positive development appeared last October in Legion. About the same time the United States revealed a COVID-19 vaccine would be ready by the end of 2020, the Canadian magazine reported that a noted medical journal announced a new approach to fighting malaria.

Legion reported a clinical researcher for the U.S. National Institute of Allergy and Infectious Diseases has developed a vaccine for mosquito-borne diseases, based on mosquito spit. It causes the immune system to recognize mosquito saliva proteins and produce antibodies. The antibodies promote immunity by binding to pathogens to prevent them from damaging cells, plus coating pathogens and alerting other immune cells to attack and remove them.

“Those antibodies recognize the proteins the next time they’re encountered, sparking an immune response that goes into action to impair or prevent infection—and not just to malaria, it turns out,” wrote author Sharon Adams. “In animal studies, saliva vaccines impaired development of mosquito-borne Zika virus and sandfly-borne leishmaniasis.”15

In the first human trial of this vaccine in 2017, Adams said a strong immune response was observed among 49 volunteers, with only minor side effects. Next it will be tested on larger groups; if clinical trials continue to prove successful, the first effective malaria vaccine may be just around the corner.

In addition to this promising development, a European magazine carried a report from a healthcare company official saying there are antimalaria positives to be gained from the COVID-19 fight. Hogan Bassey, a Nigerian native who experienced several bouts with malaria as a child, noted that the pandemic highlighted system failings in global healthcare. He said if we are able to address those problems, the world will be better positioned to eradicate malaria and other diseases.

The chief innovation officer and founder of LivFul said his company is working with others—including nonprofits—to develop a repellent that it hopes will prove an efficient control tool. It has been working on a project in Ghana with a pharmaceutical company to improve one of the repellant’s ingredients, using LivFul’s technology to drive access.

“When we developed a revolutionary family-friendly insect repellent to halt the transmission of diseases like malaria and Dengue fever, we knew we could have a significant impact on insect-borne disease,” Bassey wrote in EPM Magazine. “If people in malaria-prone areas can purchase and use our repellent, these diseases can be stopped before they destroy lives, families, communities and industries.”16

Such a product won’t be the first tool developed. National Geographic recently reported hundreds of thousands of children across Kenya, Malawai and Ghana have been receiving the RTS,S vaccine, whose development has taken 35 years and cost hundreds of millions of dollars. While some African health professionals have asked if the expense and logistics of multiple vaccinations are worth it, the magazine said some Chinese scientists have been utilizing a new approach: preventing malaria from even occurring.

It goes back to 1972, when the Chinese discovered Artemisinin, a drug used to treat malaria. Now, scientists there believe Artemisinin Combination Therapies (ACTs) can be delivered to an entire community simultaneously, through Mass Drug Administrations. The goal is to reduce levels of the malaria parasite in human blood, so mosquitoes won’t contract it and spread it.

“The life cycle for a mosquito is 30 days,” explains Ethan Peng, senior manager in Kenya for the Chinese company New South, which manufactures ACTs. “So by mass medication, we can clear the source from all human beings (so) the mosquitoes cannot pick up on the malaria parasite again with their short lifespan.”17

When it comes to fighting malaria, the bed net still appears to be the leading tool. When COVID-19 hit in March 2020, WHO malaria scientist Pedro Alonso expected the biggest malaria disaster in 20 years after African countries temporarily suspended bed net campaigns.

That didn’t seem to be happening, the scientist said five months later. He credited lobbying by WHO’s Global Malaria Programme and its partners, which persuaded countries to resume their net distribution campaigns. Despite concerns over continuing COVID-19 problems, Alonso said, “We probably stopped the first big blow.”18

Among the many non-governmental organizations doing their part to distribute mosquito nets is Gospel for Asia (GFA).

Since 2010, GFA has distributed more than 1.3 million nets to at-risk residents in mosquito-prone areas, including 380,000 in 2019 (many are treated with insecticide, with availability depending on local conditions).

These efforts are augmented by distribution of malaria pills at GFA’s medical camps. In 2019 the organization hosted nearly 1,300 camps, which are free to attendees.

The difference net distributions make can be seen in the stories of people like Baharupa, a 55-year-old farmer and father of three who felt pressured to drink alcohol at many village-wide events. Not only did he often wind up drunk, he developed an addiction. That all changed after Satyam, a GFA worker, organized a distribution of 4,000 nets.

“Who can give us mosquito nets without money?” Baharupa wondered. “This shows [the believers’] love towards us.”19This experience so touched Baharupa that it began a transformation in his life.

Another story of relief involves a 71-year-old widow whose husband had died more than a decade prior. With four daughters all married, Bhranti spent evenings alone, worried about the tattered net providing her only protection from mosquitoes. She received a new net through a distribution organized by a GFA worker.

“I am so grateful to the [GFA workers] for their love and care and for providing a mosquito net,” Bhranti says. “Now I do not need to worry about buying a mosquito net as I have been provided a new one.”20

Even amid the problems COVID-19 has caused in poorer parts of the world, GFA’s supporters have been able to help local workers in the field save lives and prevent more tragedies during the pandemic, says Gospel for Asia (GFA) founder, Dr. K.P. Yohannan.

“Without proper prevention or treatment, the consequences of a simple mosquito bite are very serious in many places of the world,” Yohannan says. “But for just $10, we can protect numerous lives, one net at a time.”

GFA World (formerly known as Gospel for Asia) is a leading faith-based global mission agency, helping national workers bring vital assistance and spiritual hope to millions across the world, especially in Asia and Africa, and sharing the love of God. In GFA World’s latest yearly report, this included thousands of community development projects that benefit downtrodden families and their children, free medical camps conducted in more than 1,200 villages and remote communities, over 4,800 clean water wells drilled, over 12,000 water filters installed, income-generating Christmas gifts for more than 260,000 needy families, and teaching providing hope and encouragement available in 110 languages in 14 nations through radio ministry. In the years ahead, GFA World expects to launch programs in numerous African nations, starting with compassion projects in Rwanda. For all the latest news, visit our Press Room at https://press.gfa.org/news.

Read more blogs on GFA World, Malaria, Mosquito Nets and the COVID 19 Pandemic on Patheos from Gospel for Asia.

Learn more by reading this Special Report from Gospel for Asia: Winning the Ancient Conflict Between Man and Mosquito — Know Your Enemy or Succumb to Vector-borne Diseases 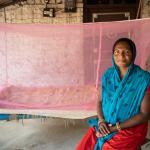 May 5, 2021
Malaria Makes Comeback Amid Worldwide Coronavirs Pandemic – Part 1 by Gospel for Asia
Next Post

May 7, 2021 'Eleventh Hour' Prayer Called for by GFA World Amid 'Tsunami of COVID Suffering'
Recent Comments
0 | Leave a Comment
"Very wonderful website. As I look back over the decades of my life with KP ..."
Bill Bray Gospel for Asia Celebrates as Bride ..."
"Such a pathetic story about Bani and Kripal, and off-course about God's divine visitation when ..."
Sunday Ubah How Gospel for Asia Goats Fixed ..."
"Yes, but according to the lawsuit settlement agreement signed by both parties, “All funds designated ..."
Randall Mains Gospel for Asia Becomes a Tool ..."
"Didn't Gospel for Asia got sued for lying to donors on where their money is ..."
Christian Gospel for Asia Becomes a Tool ..."
Browse Our Archives
get the latest from
What Motivates Us.
Sign up for our newsletter
POPULAR AT PATHEOS Evangelical
1

Can God Change the Past?
Roger E. Olson
Related posts from What Motivates Us.