Funerals and Fireflies: Chapter One

Thunk.  The dense rust-colored clay landed in the grass next to his feet.  He felt the tension of the wooden handle as it pressed against the soft skin of his palms and he gripped harder than anything he had ever held in his fifteen years.  He raised his right foot and saw the flash of the red canvas sneakers his mama had saved so hard to buy.

“Dig,” the voice was certain but not demanding.

He shoved his foot down onto the top of the metal spade and the chipped rocks scraped against the shovel like nails on a chalkboard.  Schrack.  This was stubborn ground.  An old grave.  The roots underneath the grass held on to the fertile Alabama soil for dear life and his lower back pulled tight as he bent over and pierced the ground again.  He was using muscles he had never needed before.

“Dig,” the voice echoed through his ears and rattled his soul.

The fireflies had just come out to dance and he swatted them away in the thickness of the dusky sky.  Flitting away, twirling in a maniacal ballet they could no more control than the digger his frantic digging.  The late Summer sun had barely set and he could just make out the shadow of three wooden crosses over on the farthest hill, in front of the hulking moon.

Another pressing.  More scooping, up and over.  A dog howled in the distance.  His pulse was racing and there was a swishing sound in his ears, like a concrete truck, churning a heavy load.

Another layer of rich red earth heaved to the side and he leaned against the tree trunk, which was carpeted with moss.  He wiped his brow, smearing grime across his forehead as his throat tightened.  The moon was inching higher in the sky and the silhouette of mildewed limestone squares dotted the rolling hills.

He was startled by a curious chipmunk, crossing his path amid a maze of ancient roots. His foot slipped on a new blanket of dew and he grabbed the handle half way down, bracing his fall.  He grimaced at the selfish intrusion of a splinter.

He breathed deep, lungs expanding and crackling like the dry-rotted cloth and dusty cardboard of an accordion, trying to calm himself as he inhaled the smell of freshly cut grass and sweat and iron.  Muffled voices filled his ears.  Women.  Incoherent chatter, drowned out by the sounds of an electric table saw.

“Dig,” the incessant voice rang through his depths like an unLiberty Bell.  The whisper chilled his arms.

“Dig.” Pain shot through his side.  I feel like I am going to puke. He shook his head and tried to wake from the torturous slumber.

He turned and lost his footing, stumbling forward at the sound of the strange voice–a woman–vaguely familiar but somehow very distant.

He forced his eyes open, lashes sliding upon lashes, like a final curtain call.  “Luke, honey.  Are you alright?”  Beads of sweat involuntarily lined his brows.

“Same one from last night?” she asked, wiping her hands on her apron, jewelry clanging like kitchen utensils.  “Same one, Nana.”  His breath was short, fast, and shallow.  “You want to talk about it?”  He exhaled again, “Nope.” She searched his eyes, left-to-right, her own eyes squinting, looking for something deeper, and said, “It’s just that most folks have those kinds of dreams at night and it’s one in the afternoon.  I’m sure they’ll pass, Luke.  You’ve had a lot going on.”

A white Ford F-150 Super Duty with a ladder rack and shiny wheels pulled up in in the driveway with “Taylor Road Construction” on the side in vinyl lettering.  From downstairs, “Mother, your son is here.”  Luke’s stomach dropped.  Lena sighed, “I’ll be down in a minute.  Get your brother a glass of tea, Grace.”

“How long is he here?”  Lena sat on the bed next to Luke, “Just for the weekend.  He’s going to fix that spot next to the chimney while he’s here.  This isn’t easy on your father either.”  His legs had never felt so cumbersome, as he lifted them off the bed and plopped his feet on the floor.  His heart was heavier than his legs as he stared at the floor.  Lena wrung her hands in her lap, “I better go check on your Dad.  Jump in the shower.  We can’t be late.  And shave your face, Luke.  You look like a wooly booger.”    Deep breaths.  As he inhaled, the room smelled like a potluck dinner.  “Ok, Nana.”

Every step took more energy than he had ever realized before.  Grief is that way: it creates a temporary laziness that cannot be explained or immediately defeated.  Luke closed the bathroom door behind him and exhaled as he listened for the comforting click of the lock.  Whew.  He just couldn’t deal with his dad yet.  He needed a few minutes to decompress.  Why was I wearing my All Stars, he thought.  And what were all those voices?  And a table saw?  Who builds next to a grave?

He felt the cold metal of the shower knob as he turned on the water.  Luke walked over and flipped the switch for the exhaust fan, while double-checking the door.  Still locked.  He pulled the hoodie over his head and climbed into the shower.  Streams of water hit his back and Luke breathed deeply, inhaling the steam into his nostrils.  He tried to relax but just couldn’t figure out the dream.  I never dream, so why the same one for two days?  Dreams have a way of bringing buried things back to the surface.  The new shoes, that voice, and the smell of sweat and death. Luke didn’t know why he was digging, but the broken-hearted teenager had no doubts about why he was at the grave: his mama.

I worked on Funerals and Fireflies for about six months. And I miss it very much. The creativity. The digging. The dreaming. The crawling into a character’s skin and walking around for a while.

Sharing Chapter One today is a great experiment, but only if you respond. Do you like it, love it, or loathe it? Please leave some feedback in the comments today. It would mean the world to me! 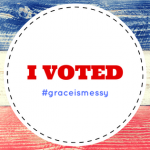 October 31, 2016
5 Ways to Practice Self-Care During a Scary Political Season
Next Post 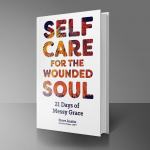 November 1, 2016 How to Order "Self-Care for the Wounded Soul"
Recent Comments
0 | Leave a Comment
Browse Our Archives
Follow Us!