180 Degrees of Separation – The Wheel of the Year part 2

So far we have looked at The Moon in part 1 and part 2, and The Wheel of the Year part 1.

Last week we looked at the way the seasons are different between the northern and southern hemispheres.  We continue this week by looking at how our more specific regions might be different to the commonly accepted four seasons, how we can figure out what the seasons are and what we can do with them.

When we left off last week we were looking at the idea that there are no typical seasons world wide – every country, perhaps every region has its own seasons.  The trick is figuring out what those seasons might be and how to work with them.  Now of course I can’t help you for your specific region – even if only 10 people read this post, that is still 10 different regions plus my own region that I would need to study. That would take me more than the few weeks I have spent on this series of posts!  The best I will be able to do is give you ideas on how to find it all for yourself and give some examples.

And I have to be honest – the common four seasons are not entirely unworkable for a large number of areas.  They do seem to fit most places, else why would they be in use?  So if you don’t want to dig deeper, you really don’t have to.  The four seasons are fine as they are, but it could be worth it to do the hard work and find out what is really going on in your area.  You might be surprised at how limiting the four seasons really are.

Where I lived as a child, I didn’t understand why Americans called autumn, fall.  I mean, I understood it had to do with falling leaves, but I had never really observed the phenomenon on much more than a three trees in a single town level.  So what if a couple random trees lose their leaves?  How does that make it be called “fall” of all things?

I have been in a place where there would be thunder and lightning storms on an almost nightly basis, then in the morning it would be so hot and dry, the mud would dry and crack before 10am.  It was in November, late spring for us in Aus.  And yet, where I live now, we are actually more likely to have storms in January, summer and our greatest heat is in February when we have the worst of the bushfires.

In winter we are likely to have very cold weather, some harsh winds and of course rain – but to be honest, the rain is not as common during winter as it is in say spring and autumn.  We are just as likely to have a dry winter as we are to have a dry (but stormy) summer.  And summer storms do not necessarily bring us rain where I live now.

In many places winter is considered the “death” time, mostly, I think, because of the snow.  Many plants and animals will hide away from the snow, trees will shed their leaves in autumn to protect themselves from the cold and snow.  But I don’t get snow in my area, nor where I lived as a child.  We get a moderate amount of rain where I am now, and really, I have to say that our winter is not that big of a change, visually, with the plants.  Our town is lined with elms, so we do get a lot of leaf fall from winter and as such bare trees in winter – but otherwise, there is little change.  Winter truly equals cold here.  That is the only guarantee.  In yet other areas the rain is so good in winter it could be considered a time of growth, when the plants are actually fed.  Especially in comparison to their dry, hot and barren summer.

What are the Seasons?

This is the really tricky part.  It’s one thing to say that there are more (or less) than the common four seasons for many places, but how do we know what is a season and what is not?

The first thing you might do when trying to figure out your own Wheel of the Year,  and discover your local seasons is to take a look at any native lore of your area – here that would be a specific, or perhaps multiple, Aboriginal Tribes.  I do not suggest copying their lore and beliefs, certainly not – but copying isn’t the only way to get help from First Nations and natives.  What you want to learn is about their seasons, how many and when and how long for each and what happened or was unique about each season – from weather patterns to animal and plant patterns.  Learn the names they use/d for the seasons, not to copy but to gain a more specific understanding of those seasons.  Learn about the deities or spirits or other entities honoured or avoided or appeased during each season – again not to copy but to gain more understanding.

For example we can look at the Gariwerd calendar below.  Looking at this calendar we can see that one of the seasons is called the Season of Honey Bees – this gives us a good bit of information about that season.  Just from looking at the English name we learn something about it, before looking at any of the other information.  We know it has something to do with honey bees and we know to keep our eyes out for anything to do with honey bees at this time of year.

Now this calendar is only slightly relevant for me, since it is for an area several hours from me.  Nonetheless it can give me ideas at what I can look at in my area.  The first season is mostly relevant to my area – Jan through to March is indeed the hottest and driest time of year, with a significant risk of bushfires (peaking in February), surface water is scarce and yes, it is, usually, a good time to view the night sky.

You can also look at the lore of other areas that are not your own, from all over the world.  This won’t help you understand your local seasons, but it will give you ideas on what people look/ed for when observing seasonal patterns.  A common thing you may find in many areas is Wet and Dry.  Two seasons, and that is it.  Wet and dry.  This could perhaps seem even more limiting than the four seasons, but it is also possibly more accurate for some areas.  If you spend 4 months of the year with full and overflowing rivers, heavy rains and floods but 8 months of the year with dry rivers, no rain and cracked earth – well what more can you say? If it is hot through both of those seasons, well you can’t really call any of it “winter” can you?

But even those areas may have more than meets the eye.  There may be about 2 months in the dry period that is extremely windy – that could be a windy season.  There may be one month in the dry that is full of no-rain electrical storms – the stormy season.

And it is worth noting that the seasons do not necessarily have to be uniform.  You can have a mix of 1 month, 2 month, 3 month and 4 month long seasons.  Or some other combination.  And seasons may overlap on certain months – just because May is May, doesn’t mean it must be one season for all of May. 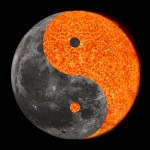 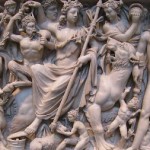 June 24, 2016 Speaking of the Gods
Browse Our Archives
Follow Us!

Review: The Magick of Food by Gwion Raven
I've always been a Kitchen Witch so when I heard about Gwion...
view all Pagan blogs
Copyright 2008-2020, Patheos. All rights reserved.