Remosquing: Imams, Our Expectations and Their Salaries 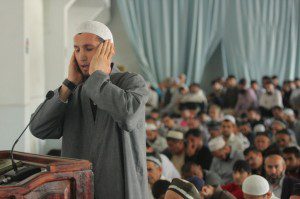 I came across this article (2012) which is about the salaries American imams receive as compared to their Jewish and Christian counterparts and read it with eyes that had recently watched the new documentary Unmosqued*. The film dives into the deeply discomforting question of why Millennials, Generation Xers, converts and women seem to be giving up on American mosques, and the third spaces they are creating in the absence of regularly attending mosques. I will write a more detailed review of the documentary (in which I am interviewed) before the wide release in late May, but I wanted to bring up a few points regarding imams and what their salaries say about our expectations for them. The article tells us:

There’s no comprehensive survey on the salaries of Muslim clergy in America, but Islam appears to be the least remunerative of the major monotheistic religions. Imams only make around $30,000 annually and rarely receive a housing stipend. Many hold second jobs teaching in Muslim schools or as shop owners. They can earn a few thousand more if their mosque is funded by outside contributors.

I’m all for qualified imams making not only a living wage, but actually making a great salary with full benefits for themselves & their families, because I believe everyone deserves more than a living wage. And $30,ooo for a family of five (or more) is not a living wage. I also think that a national imams’ union may be helpful in adjudicating employment disputes and the like.

However, though American Muslims are one of the wealthiest religious groups in America, most of our congregations do not pay wages equivalent to Jewish and Christian leaders. There are some legitimate reasons for that, including this major one: many mosques don’t have membership fees and those that do are typically inexpensive. Because of their precarious financial situations, many mosques are simply struggling to pay the bills and can’t afford to offer competitive salaries for imams. Further, some communities seem to believe that imams (and their families) should sacrifice financial security because they are working fi sabilillah – in God’s way. But, while Islam does frown upon extravagance, it does not require its adherents to take a vow of poverty.

Therefore, many imams hold part-time positions at their mosques and have second jobs that range from being a Quran teacher in the community, to being a small business owner, to being a doctor. Few American imams have formal training – neither in traditional Islamic sciences such as jurisprudence or Quranic exegesis, nor in “secular” fields such as psychology or counseling**. They are typically sincerely religious men who are volunteering to serve as religious leaders in their mosques, with or without salaries. The communities that hire them assume that the second (or primary) job will take care of the imams’ salary, his family’s health insurance, retirement plan, etc. Unfortunately, many of these men are struggling with busy schedules and are ill-equipped to deal with the challenges facing their congregations in a productive and culturally sensitive manner  – which is one of the reasons why so many people are becoming unmosqued.

Further, there is no comprehensive rulebook on what role an imam should play and what his educational qualifications should be. In majority Muslim countries, the imam is traditionally understood to be the man who regularly leads a local congregation in prayer. He’s not necessarily a religious scholar, or jurist or marital counselor. These roles are filled by qualified persons in the local society. The imam’s role is further muddled in the West, where mosques are typically run with the same basic structure as other houses of worship – which means that imams must often take on a role equivalent to a priest or rabbi. Additionally, imams are often the “go-to” Muslim voice at interfaith events and when the media wants a Muslim perspective on a current story. The problem with that is that American Muslims have no seminaries where our  imams can get a formal Islamic education, no unified national certification process whereby congregations can know they have hired a qualified imam, and no national network dedicated to serve imams’ needs and fight on their behalf if their rights are being trampled by the community that hires them.

Of course, there are many imams serving American congregations who have indeed received formal Islamic training abroad. This is not necessarily a bad thing. Islamic religious training is typically based on a student being taught by a teacher who can trace his or her own teachers up a chain (often through the centuries) to the original founder of their school of thought. This methodology of scholarship is replicated throughout Muslim-majority countries and communities across the globe. American Muslim communities must find a way to develop seminaries that are linked to this traditional teaching methodology and also incorporate training in the educational fields that will help them provide pastoral care to their congregations and build positive relationships with members of other faith communities.

From my perspective, a great imam isn’t necessarily only someone who speaks English with an American accent, who refers to popular culture in his sermons and can throw in Arabic in everyday conversation. That guy does sound cool, but I’m more invested in figuring out how to develop American imams (and other Muslim religious leaders) with sound and sober Islamic knowledge, a cultural facility with the United States, and the patience and temperament of a mentor concerned about the emotional and psychological welfare of his charges. Someone who understands the nature of structural racism in this country and challenges it among his congregation. Someone committed to challenging misogyny and dismantling patriarchy in Muslim communities. Someone who knows how to respond to a survivor of domestic violence or sexual assault, who can give advice to a teenager confused about his sexuality without judgement, who can comfort a parishioner suffering from depression, who can help frame the questions a person struggling with atheism is asking – without spiritual abuse. And, ideally, he’d be someone with a sense of humor. Yes, I know this is a tall order, but I think that guy would be worth a million dollars***.

One way to attract someone with that kind of temperament is to offer him competitive salary, a salary that may siphon away some of the young men in our communities from medical, law or engineering schools, but really, how many more doctors, lawyers and engineers do we need? We do, however, critically need more imams who care for the needs of others,  promote justice and are creative thinkers. I don’t want our communities to joke anymore about the kid who couldn’t get into medical or law school and went to the madrassa instead. Some will say that either we get what we pay for, or that we need to do better by our religious leaders. I say we do get what we pay for AND we must do better by our imams.

We must invest heavily (both human and fiscal capital) in building Muslim seminaries for imams and other religious leaders. We must develop a nationally recognized imam certification process which will help to keep imams accountable to their congregations. We must protect the rights of imams who are usually employed “at will” and at the mercy of their mosque boards. And we must pay them competitive salaries, in order to both attract the most qualified candidates and to mitigate the needs of imams to take on second or third jobs to support themselves and their families.

American Muslims, as a demographic category, are one of the most highly educated and wealthiest religious communities in the US. There’s no reason why we cannot prioritize educating young people who want to become Muslim religious leaders, with the best and most comprehensive education. Well-educated and qualified imams who can offer pastoral care with religious and cultural sensitivity to the communities they serve are invaluable to the health and sustenance of our communities. And, they are a critical component in helping young people, and others who feel marginalized, become remosqued.

Being an American imam is an emotionally draining job. We must acknowledge that as a community. There are many imams who frankly should not be in their positions – they have neither the temperament, nor the educational background for it. We must acknowledge that as a community. The solutions to these challenges are multifaceted and include developing religious educational institutions that serve our needs and paying our religious leaders better for the critical services they provide our communities.  We deserve better and so do our imams.

*I’m currently unmosqued, but wish to be remosqued. I will try to tackle the whys and hows of these situations in this and upcoming pieces, inshallah.

**This piece is written from the perspective of and about Sunni Muslim experiences – I’m not clear on what the qualifications of American Shi’i religious leaders are, though I understand that they play a different role in their community’s religious structure than do Sunni imams.