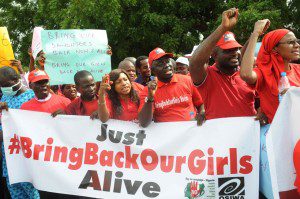 This week has seen an uptick in activism – social and on the ground – and awareness raising of the situation of nearly 300 school girls who were abducted by the Nigerian terrorist group Boko Haram last month. Protests have been planned in capitols around the world, a hashtag campaign #BringOurGirlsBack has trended on Twitter, and I’m beginning to see articles and photos in the mainstream press depicting the nature of this tragedy (though some of the framing has been problematic).

Muslim leaders, lay and religious alike, are speaking out. Major American Muslim organizations have condemned the abductions and called for the release of the girls back to there families. There’s a push to dedicate this Friday’s khutbah to the plight of these girls. Al-Azhar University, the premier global Sunni religious institution demanded the release of the kidnapped girls. On Wednesday, New York-based American Imam Khalid Latif chided his fellow Muslims for loud outrage over the British Happy Muslims video, the Mipsterz hoopla and Islamophobic Danish cartoons – all of which are essentially debates surrounding representation by and of Muslims – while remaining largely silent, until now, about the kidnapping and selling of girls by a militia which are actual crimes against these girls and their families, not to mention, against the objectives of Islamic law, whose primary goals can be boiled down to the protection of the sanctity of life, human dignity and property. 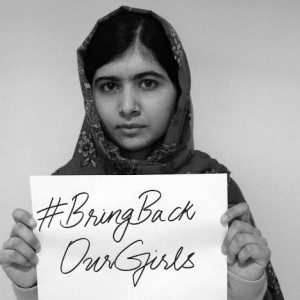 I’m relieved that the plight of these girls has gotten on the radar of activists and people of faith around the world. In a larger sense, the protest rallies, the hashtag activism, the op-eds and khutbah campaigns are symbolize that. But I’m still not sure what concrete action to actually call for. Digital duas – the selfies with supportive messages, hashtag campaigns, social media awareness raising – can be powerful symbols for those of us who believe in God. It shows the parents of these girls, other Nigerians, the government of Nigeria and Boko Haram that there’s a swell of people around the world who do indeed care about the fate of these girls; that they are not invisible. Digital duas can help those of us living outside of Nigeria – insulated from the complicated political/military structures there – feel like we are tangibly making a difference. Even if that difference means we are calling for people outside of Nigeria to pray for the release of the girls, for those of us with means to donate money to organizations that support survivors of sexual assault and for political leaders to understand that we want them to Do Something.

But, what action on the ground are we calling for? It seems to me that there are only two viable ways to rescue these girls: backdoor negotiation or military action. So, what then? Do we ask a government that has so far shown that it cannot (or will not) deal a military death blow to Boko Haram to negotiate with the terrorists for the release of hundreds of kidnapped underage girls? Do we support Western offers to send military assistance to the Nigerian government to perhaps find an armed solution? Are drone strikes a viable option in this situation? Should they be? Do outsiders have the right to have their voices be listened to on equal footing as the girls’ families by a government seemingly paralyzed by, or numb to, the antics of domestic terror group? Or does the external pressure give further moral ammunition and clout to the girls’ families when dealing with their government? Is this an appropriate time and place for African Union forces to be given a strong mandate to deal with Boko Haram?

It is unclear to me what action must be taken on the ground to secure the safe release of these girls, though I’m afraid that military action is increasingly becoming the only option. What is clear to me is that Muslims living outside of Nigeria must continue our digital duas for the safe return of the girls, our unequivocal condemnations of their abduction and our universal rejection of the religious authority made by Boko Haram. This terrorist group must be stripped of any kind of religious legitimacy by Muslims everywhere. And citizens of the world everywhere, of every nationality and religion, must continue to speak out and protest in solidarity, so that both the Abuja government and Boko Haram know that the world is watching and the girls’ families know that we have not forsaken them.

April 30, 2014
Remosquing: Imams, Our Expectations and Their Salaries
Next Post