#ZoulSoul: On Being An Immigrant

On Being An Immigrant

I was brought into this world lost between two lives. My body, a sandy vessel that crossed the
red sea and crept its way into the crevices of the Nile. But I opened my eyes in a foreign land, with the blood of two immigrants running through my veins. And denial. Is all I ever felt then. I denied the skin, I was in. Denied the afro-Arab within. Decided that I didn’t want black skin.

Maybe it was something about the way I was always so obvious in a crowd of white catholic
school girls, that made me want to take all the white crayons from class and melt them on to my body in hopes that I would fit in

Or Maybe it was the fact that I had to sit down every morning and watch them cultivate and pray over black body. In the name of the father, son and the holy spirit. Amen.

Maybe the only other thing I learned in school was that being black wasn’t the only thing that made me an outcast, but being a black Muslim did
Now don’t even get me started about being an immigrant with a black face. You see having to face, the struggles of race, is hard when you’re easy to trace.

I seemed to face only little white girls and boys, who grew up playing with white toys, whose lives only knew black noise and I wish I could say I knew what safety was
My neighborhood was the place where black girl was not just my label but the name I responded to every single day. The windows of my house were painted with yolks and I could hear the words ‘ugly nigger’ in the places I would play.

I lived in a place that did not allow me to believe in the existence of safe space and meanwhile all my mother could say was ‘baby they’re just jealous of you’.

But mama if only you knew how hard it was to live every day thinking and believing that white was the only right color to be. I grew up believing that my genes had morphed me into some kind of misfit, who was never allowed to be considered human, whose life was dictated by the color of her skin. So believe me when I say that if they were jealous then we would have different shades of nude and not only one shade of beautiful. Bigotry would sound like a broken record and we would all jam to the same soulful tunes.

You see the world defined me the day I left the womb and I opened my eyes to a world in which I would be the following 4 things:
Too black for the whites, too white for the blacks, too black for the Arabs and too Arab for the Blacks

A hybrid.
A hybrid to them with skin that made me a threat, a tongue that rendered me a terrorist and a vagina which deemed me lesser.
A mix of characteristics that had me inflict so much hate on myself. But the truth of the matter is that I was a hybrid then and I am still a hybrid now.

To decide to live every day appreciating my black skin, my Arabic tongue, my wide nasal bridge, my almond shaped eyes and my cheekbones that go up so high they make angels smile

Appreciating my ancestors who decided to fuse cultures to make me, me. Appreciating the fact that I am 3 shades darker than my mother, 2 shades lighter than my father and only one shade of me.

So let me introduce myself,
Not by my skin, religion, ethnicity or anything based off what you see, but by my name.

My name is Mawada.
which translates from Arabic to Affection, love, intimacy, attachment, friendship. And I live everyday trying to embody my name because the world never let me see life that way.

So while my body, the vessel continues to cross oceans, I will close my eyes every night and remember the love that is anchored with my family and I will appreciate the people that showed me, that just like the oceans, seas, rivers and lakes, love crosses borders and only gets stronger when the waves come crashing down. 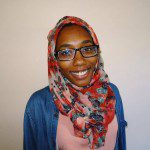 Mawada Elmahgoub is appreciative of all the arts, lover of God and humanity, and an eternal soul searcher.

February 2, 2017 Why are we not all Quebec City?
Recent Comments
0 | Leave a Comment
Browse Our Archives
Related posts from Hindtrospectives