A Response to Preston Sprinkle on LifeWay and “the Biblical View of Marriage” July 20, 2017 Chuck McKnight

I recently posted about the so-called “biblical view of marriage” that LifeWay uses to filter their authors, and the response I received has been far beyond anything I expected. In just a few short days, it has surpassed the readership I normally expect for my entire blog in a month.

The feedback I’ve heard has been overwhelmingly positive, but there have been some critiques as well. Frankly, most of the critiques seem to be based on an incomplete reading of the article, and I’m not interested in simply restating what I just said. However, Preston Sprinkle stopped by to leave a critical comment full of substance that is well worth addressing.

A little background on Preston and myself: I first became aware of Preston when he co-authored Erasing Hell with Francis Chan, arguing in favor of eternal conscious torment but leaving room for the possibility of annihilationism. At the time, I found it fairly compelling, but I soon shifted to conditional immortality, and today I am hopeful for universal reconciliation. Preston too has shifted since Erasing Hell, and today advocates the view he calls “terminal punishment.”

My next (and far more influential) interaction with Preston came in the form of Fight: A Christian Case for Non-Violence. His was the book that finally convinced me that Christians are called to abstain from all violence. Ironically, that commitment to non-violence is what ultimately led me to reject inerrancy, which is now the foundational point of disagreement between Preston and myself.

Nonetheless, I find Preston to be a thorough thinker and a gracious debater. Where we disagree, his thoughts continue to challenge my own, and our discussions have always been productive.

With that being said, here’s the comment he left on my recent article:

Thanks for this intriguing piece. As you know, there is so much you and I agree on in life, ministry, and theology. However, as part of a friendly dialogue–and in no way do I speak for, represent, or even agree with LifeWay’s articulation of their view–I think you’re missing some things in your argument.

First, you’re atomistically picking out Bible verses on marriage, calling this “evidence for a biblical marriage,” and then putting the pieces together and saying we shouldn’t (and don’t!) follow THAT marriage.

In some ways, this is helpful. Certainly some conservatives may need to be shown that not every verse on marriage is worthy of emulation. But you’re ignoring the overarching storyline of how marriage is integrated with the creational narrative of redemption. I could explain more of what I mean, but N.T. Wright (as always) does it better: http://www.plough.com/en/topics/life/marriage/what-is-marriage-for

In short, marriage as a one-flesh union between two sexually different persons is woven into the fabric of the creational story and threaded throughout the entire drama of redemption: Differences coming together in unity without erasing those differences. It’s what drives Gen 1-2, Rev 21-22, and so many themes and passages in between. If you want to pull that thread out, that’s fine. But you’re going to be left with a very different garment. I mean, story. Or both.

Second, there’s a massive difference between cultural expressions of marriage and God’s intrinsic design of marriage. That is, most statements on marriage you’ve picked on deal with statements in the OT law where God regulated, tolerated, and sometimes later critiques certain cultural views of marriage, sexism, slavery, and a whole host of other ethical issues. You can’t just pick out random statements from the OT law and ignore the question of OT law for Christian ethics as a whole. (Given your level of intelligence, I’m going to assume that you know this to be a very huge issue in Christian ethics and theology, which many scholars have addressed…none of which you mention.) There are few ethical questions that DON’T have the same problem you point out; statements in the Law that need to be interpreted in light of the larger biblical story. As a fellow pacifist, I know that you know this…

Thanks for taking the time to read my article and offer your thoughts. Indeed, on the whole, you and I have tended to agree probably more than we disagree. And in this case, I do agree with what I take to be the main premise of what you wrote.

As the Apostle Paul might say, I’ve been engaging in a bit of foolishness. My article deliberately took inerrantist literalism to an extreme in order to make a point. I hope no one thinks I actually believe we should form our functional view of marriage by piecing together the most obscure and outrageous examples that can be found throughout scripture.

Yes, you (and N.T. Wright) are absolutely correct that we must look at the grand narrative of scripture, rather than isolating proof texts. You and Wright (as non-affirming Christians) would simply differ from me (as an affirming Christian) on the specifics of how you interpret that grand narrative, the direction you see it pointing, and which texts you see as normative commands expressing God’s ultimate desire, rather than “cultural expressions.”

And based on the extensive research you’ve done for your own recent books on the subject, I know that you’re well aware of what a complicated topic this is. While I land on one side, and you land on another, I’m fairly certain you’d be gracious enough to admit that it’s far from a cut-and-dry unequivocal case to say that either side is definitively “the biblical view.”

Of course you believe that your view is the one best supported by the grand narrative of scripture, and I believe the same about mine. But hopefully neither of us are arrogant enough to assume ours is “the biblical view of marriage”—especially given so many contradictory prescriptions for marriage as cited in my previous article.

No, of course we don’t base our view of marriage on such obscure examples. (Just as we must not base our view of marriage on three obscure “clobber texts” in the New Testament.) But one way or another, all of these texts must be grappled with. We still have to admit that they’re in the Bible and that they strongly appear to teach views very different from whatever we would say the grand narrative points to.

My article was intended not to dissuade us from seeking a view of marriage informed by the Bible, but to help us maintain some humility in our approach. LifeWay’s claim to definitively hold “the biblical view”—and their decision to use that claim as a tool of separation—is the problem I wrote my article to address. 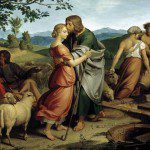 July 17, 2017
Sorry, LifeWay, None of Your Authors Hold to “the Biblical View of Marriage”
Next Post 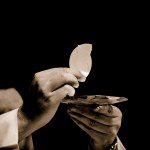 July 25, 2017 Thoughts on the Eucharist: Mystical, Not Magical, and Everyone Is Included
Recent Comments
22 Comments | Leave a Comment
Browse Our Archives
get the latest from
Hippie Heretic
Sign up for our newsletter
POPULAR AT PATHEOS Progressive Christian
1

Christians, It's Time to Admit the...
FreedHearts
Related posts from Hippie Heretic