A Voice in the Desert

Sometimes, I wish I were still in Phoenix.

Like in January. That’s a given. Or like when I need to clear my head and want to just step out my back door and go for a hike in the beautiful desert mountains. Or when I try to catch a glimpse of the sunset, here in the midwest, but my view is blocked by treetops and all my neighbors’ houses.

And right now, I’m wishing I was back there in the desert… because a group of “Biblically based” churches (in the most affluent part of town) is joining together to preach a common theme: “Progressive Christianity: Fact of Fiction?” 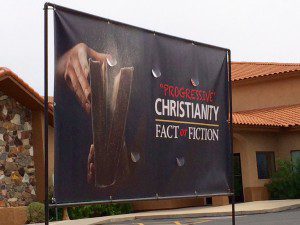 The banners are all over town. And their promotional materials state that they don’t wish to “discount the beliefs of others,” only to clear up some questions that their people have been asking. Of course.

Most pastors can tell you fun stories about the phone calls they get in the office: the abundance of REALLY rude sales people who just do not ‘get’ how churches work; the one who just cannot believe when the woman who answers the phone says she’s the pastor (the former and the latter are often the same caller, but not always); or the person in the neighborhood who wants you to come do a “house blessing,” but then you realize that by ‘blessing,’ they really mean exorcism… Yeah, we’ve got a million of ‘em.

In Phoenix, I used to get a particular kind of phone call pretty often—one that I haven’t heard couched in just this way, in any other place I’ve served. A person, presumably church shopping —would call and say “are you a Bible-believing church?”  I’d launch into a long rambly thing about what Disciples do and do not believe about the Bible… knowing, all the while, that any person who led with that particular question was not going to darken the door of my place, anyway.

What I really wanted (and finally learned) to say was this: “Bible-believing? Yes, we are. But probably not how you mean.”

The Fountain Hills churches preaching this “Fact or Fiction” series, qualify themselves as “biblically based” churches. As opposed to, you know, the other kind. The not-so-subtle implication is that the ‘good’ churches are based on scripture, and the rest are pure “fiction.” It says so right there in the promo materials.

I’m not going to write an apologetic for Progressive Christianity, because a) I’ve done that before, and b) if you’re reading this you probably know all the things I would say about how we view the Bible and what our values are.  But I do want to wonder aloud, why a group of churches in one community would suddenly engage in this public offensive? And, are we seeing the beginning of a trend?

We might say this response simply points to the growing reach and visibility of progressive faith—and that more conservative churches are trying to defend their relevance in response to that trend. That might be partly true, but it may also be too simple. This is more than a few pastors reacting to a PR threat. If this is not just an isolated instance of uninspired marketing, then we are about to see a fascinating evolution in evangelical culture— other Christians are the new ‘other.’

With more and more evangelical Christians (especially the younger variety) coming around in support of marriage equality, fundamentalist pastors are wondering—‘if our people aren’t afraid of the gays any more, then who are we supposed to protect them from?”  Feminists, Muslims and science teachers? So passe. And too broad. They needed a more focused target. A fresher take on ALL THAT IS WRONG WITH THIS COUNTRY AND NO WONDER GOD HAS ABANDONED US. So then it hits them—Other Christians! Those people who CLAIM to believe in Jesus and scripture, but really think that evolution is a thing. And also are not quite sure about the virgin birth. THEY are the new foil to our ownership of all things holy.

To clarify: As one of those ‘other’ Christians, I do not in any way feel persecuted here. I am a straight white middle-class person. My life comes with many privileges, and I would not in any universe pretend that a few pastors in the suburbs have the power to diminish me, or what I teach. Nor would I diminish the real and actual persecution experienced by people all over the world, by equating a hateful message with systemic and deadly oppression.

But, it is important to acknowledge that the intent behind this ‘fact or fiction’ message—and others like it, coming soon to a suburban mega-church near you! —is not just to diminish or silence. It is to set apart yet another group of people as outsiders; and, as such, as a threat to the ‘real and actual truth’ as it is perceived within a certain institution. This is what gives power to said institution–establishing an adversary, and then selling yourself as the only protection from that danger.

How that equates to ‘gospel’ for anyone, anywhere, is beyond me. But it’s worked for centuries.

So yes, I’d kind of like to be in Phoenix right now, because I want to watch this unfold. Not to preach a counterpoint, “Top 10 Reasons Progressive Christians Are Not Going to Hell” series; but to witness the community’s response. It is a laboratory for a new era of religious coexistence in this country.

As long as fundamentalism exists—in any form—there will need to be an ‘other.’ A visible foil, a viable threat, a villain lurking in shadow… With LGBT equality in sight, that position is up for grabs. Who will go for us? Whom shall I send? …

In real life, I am over here in the midwest, so I can’t play. But I will watch with, and pray for, all my clergy and church leader friends there in this new desert… and I’ll be listening for their response. Not a defensive maneuver, but a clear and resonant voice in the wilderness. Speaking peace, enacting mercy, and saying “We love Jesus too. But probably not how you mean…”

The Fountains UMC is the only progressive voice in the Fountain Hills area, and are viewed as the ‘targets’ of this series. Check out their response here (that is their photo, up top).

More from other Patheos writers: 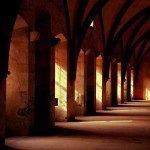 May 12, 2015
Which Body: Gay Marriage and Christian Unity
Next Post

May 22, 2015 What About the Girls? The Duggar Scandal and the Cost of Fundamentalism
Recent Comments
3 Comments | Leave a Comment
Browse Our Archives
Related posts from Irreverin