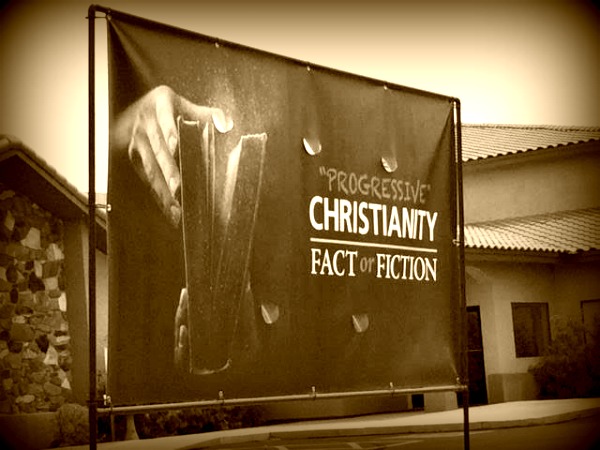 As you may have heard, eight churches of various Protestant denominations in Fountain Hills, AZ, have put aside their usual interchurch rivalries and come together in order to combat an enemy common to them all: progressive Christianity.

That’s the banner of their “movement” on display outside one of their churches above.

I guess they forgot the concluding question mark—and also, sadly, failed to note that the question they’re meaning to ask is so simple Pat Robertson could field the correct answer. The answer is A: Fact. Progressive Christianity does exist. That makes it a fact.

Ha, ha. No, but seriously. Below is the ad placed in the local paper last Wednesday by the church collective whom I’ll henceforth call the Gang of 8. (Since using the acronym for my first thought, Churches Rallying Against Progress, would just be wrong.)

The sole progressive church in Fountain Hills—the de facto target of the Gang of 8’s campaign—is The Fountains, a United Methodist church pastored by the estimable David Felten, author of Living the Questions: The Wisdom of Progressive Christianity (the curriculum for which is now being used in over 6,000 churches around the world).

Besides sharing its space with a synagogue and a Buddhist Center, The Fountains also has an ongoing relationship with the Islamic Speakers Bureau of Arizona, sponsoring a number of forums and opportunities for dialogue with their Muslim neighbors.

Their Annual Interfaith Thanksgiving has outgrown The Fountains, and so has begun to meet in a local larger Catholic Church. But not to worry: Fountains’ recent capital campaign raised enough money to pay off all their debt and build an expansion to their building.

Which, of course, is part of the problem.

In the ad above we read,  “We do not do this to denigrate or belittle the beliefs of others. Our objective is merely to answer some questions.”

That’s so fair! It’s benign, even.

What is neither fair nor benign, however, is the Gang of 8’s pastors calling pastor Felten a tool of Satan, a hypocrite, an apostate and reprobate, and comparing what he preaches to Naziism.

It’s also egregiously unfair for Fox News to quote Felten as having said that he and his church are offering, “an option to biblical Christianity.” As pastor Felten wrote to me in an email:

That’s simply a misquote; I never said that. But of course our critics pounced on the false quote, since it so perfectly feeds their narrative that The Fountains is “unbiblical.” A more accurate statement is that we offer an alternative to fundamentalist (or “pop” or “conservative” or “evangelical”) Christianity. The Fountains is totally committed to a biblical outlook; it’s just not a Fundamentalist outlook. … I’ve got several radio interviews coming up this week, and I know the “So you don’t teach the Bible?” question will be asked. Now I’ll have to keep explaining that the reporter misrepresented what I said. I’ve asked her [the reporter] to run a correction, but I doubt that will happen.*

Name-calling and the casting of harsh aspersions is typical of bullies and those feeling threatened.

And if there’s one message the Gang of 8 is successfully communicating, it’s that they’re feeling threatened.

Threatened they are, and threatened they should be. For the Christianity they represent is, in a word, ruinous. It holds that the “unrepentant” LGBT person is destined for hell, that wives must be subservient to their husbands, that Christians alone can enjoy a heavenly afterlife.

The Christianity they preach and teach feeds off fear, exclusivity, anger, and victimizing “the other.”

And right now, in Fountain Hills, Arizona, that “other” is The Fountains UMC.

So remember The Fountains UMC and their pastor in your prayers tonight. If you’re not the praying kind, send some love their way. They’d sure appreciate it.

And don’t forget to send some love to the Gang of 8, too. They’re not evil people. They’re just doing the best they can with the dreadful version of Christianity they’ve been taught. Here’s to hoping they learn a new one.

Speaking of which, I wrote the below for the group Unfundamentalist Christians (Facebook page; group blog). It describes an alternative to evangelical Christianity that’s as biblical as any Christianity ever was.

*UPDATE: The FOX 10 reporter, Linda Williams, called pastor Felten and profusely apologized for the misquote. The text on the station’s website now reads, “The Fountains offers an alternative to fundamentalist Christianity.” “Unfortunately,” pastor Felten wrote to me, “I think it may be hard (if not impossible) to get the video clip itself changed. But yay, Linda! She was really gracious.” 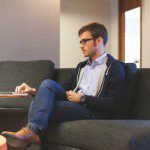 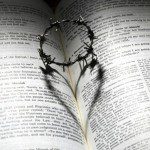 May 22, 2015 Pastors Unite to Denounce Churches' Attack on Progressive Christianity
Recent Comments
52 Comments | Leave a Comment
"So... you don't believe in the Holy Spirit, then? According to Jesus, it is the ..."
KraigDeKompressorKruncha Is hell real? What are we, ..."
"Thank you thank you thank you for this! This is exactly my story... Our story. ..."
ashley williams 1 Man, 2 Women In A ..."
"Hello dear Brother in Christ. You are experiencing Child Abuse and if it were possible, ..."
Marion Duncan Pastor calls his Christian teenage son ..."
"I am interested in why we believe that we can measure that which is by ..."
Gary Kennedy Why atheists win arguments with Christians ..."
Browse Our Archives
Related posts from John Shore