A Chinese Perspective on Justification

How would I outline a Chinese perspective of justification? 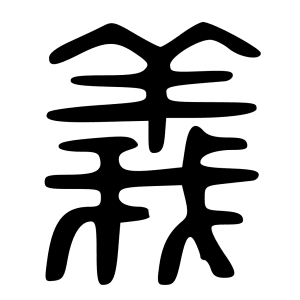 I could write a book on this, so I’ll have to limit this sketch to a few simple points. Some of these ideas or developed more in chapter 5 of Saving God’s Face.First, I need to make one clarification. I’m prescribing what should be the case. I’m not describing what Chinese pastors actually preach. This is because evangelical pastors in China have thoroughly western theologies.

Why is this? Let’s not forget. Chinese have great respect for tradition and value conformity. If missionaries don’t understand and do contextualization, then the average pastor will make sure to rigidly affirm tradition. It’s imbedded into the Chinese psyche.

Identity: Who are Insiders and Outsiders?

A Chinese perspective of justification would squarely answer questions about identity. For example, Who are insiders? Who are outsiders? Where do I belong?

Like the Jews, Chinese need to reckon with ethnocentrism and/or nationalism. I frequently ask my students whether they are Chinese Christians or Christian Chinese. The noun constitutes one’s identity; the adjective is simply one characteristic among others that could be stated. I ask them what would make them angrier more quickly: if someone said something bad about Christ or if people insulted China. You would be saddened to know the responses I get.

The identity question extends to various areas, like one’s hometown, family name, position in a company, school, rank in a class, etc. In short, we need to deal with all forms of ascribed honor that undermine one’s identification with Christ and his people.

Ultimately, we should point people to the human family, not allowing them to settle for some local, cultural, or national identity. After all, the one true God is the Father who promises to make for himself sons and daughters from among all nations.

Boasting: Who do I want to please?

In some form or another, Scripture often speaks of faith or the lack of faith in terms of boasting/rejoicing. In essence, what do we celebrate? Where do we find our own sense of worth?

Succinctly, justification raises the question, “Whom do you want to please?” There is a direct relationship between our identity and our standard of values. Both who we think we are and who we want to be determine what we regard as praiseworthy and shameful. In the West, people use the phrase “people pleasing” (typically in a negative sense). This is the constant problem we find with the Jewish leaders in the New Testament. They wanted to praise of man. Jesus said they could not have faith because they did not seek the praise of God (John 5:44).

At the level of the heart, this is the problem that Paul wants to solve when he talks about justification. A survey of Romans makes the point obvious beyond dispute. Notice for example, how Paul sets up the book in Rom 1:18-28; Rom 2:23-24, 28-29. The Jews boasted in their ethnic identity and law-keeping. Accordingly, they were unrighteous.

Faith: Loyalty is More than Belief

The royal context of Romans is often under stressed. First of all, we need to keep in mind that the word “gospel” (in the ancient world) was a royal announcement, declaring the birth, ascension, or victory of a king. It wasn’t a “religious” term per say until Christianity adopted it. Second, the entire book opens with the proclamation that Jesus is king (Rom 1:1–4). Paul conveys this idea by using a few different expressions, such as “descended of David,” “Son of God,” “Christ,” and “Lord.”

Naturally, we can understand why the Greek word for faith very often carries the idea of “loyalty.” However, around the world, people think of “faith” as mere “belief.” This simply feeds the notion that Christianity is a private affair. Chinese grasp the importance of authority. They know what it means to obey leaders and conform the a group. Who better is there to understand the biblical meaning of faith in King Jesus?

A Chinese perspective on justification will emphasize the point that Jesus saves those who give their allegiance to him. Such followers will seek to please him and will identify with God’s people, regardless of their national and cultural identity.

So much more to say on this topic. Perhaps in a book to come.

October 28, 2013 How many posts per week? (a poll)
Recent Comments
0 | Leave a Comment
"No need for comment. This article is downright offensive and insulting to the vast majority ..."
Ray How Honor and Shame Infuse Christian ..."
"Thank you, Mr. Wu, for your interesting, timely, illuminating article. I am Christian, a strong ..."
Gregor What or Who is a Christian ..."
"So this is your response to the evils of capitalism.I'm not surprised.You don't have a ..."
Bones What or Who is a Christian ..."
"But in practice his bashing extends to people beyond that."
Johnny Davis How Honor and Shame Infuse Christian ..."
Browse Our Archives
get the latest from
Jackson Wu
Sign up for our newsletter
POPULAR AT PATHEOS Evangelical
1