Why Not Begin with Babel?

What if evangelistic presentations began with Babel? Or, what if they at least were framed by the Babel story? This post explores these two questions. 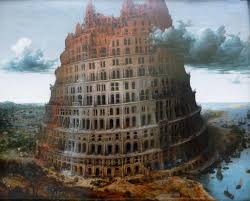 Previously, I examined common problems that emerge when we start with the Adam story (Part 1, Part 2). I also suggested another way one could start with Adam and Eve without succumbing to individualism or running into a number of apologetic questions.

Today, I offer an example whereby we can start with the group rather than the individual, i.e. the nations rather than Adam as an individual.

“Now the whole earth had one language and the same words. 2 And as people migrated from the east, they found a plain in the land of Shinar and settled there. 3 And they said to one another, “Come, let us make bricks, and burn them thoroughly.” And they had brick for stone, and bitumen for mortar. 4 Then they said, “Come, let us build ourselves a city and a tower with its top in the heavens, and let us make a name for ourselves, lest we be dispersed over the face of the whole earth.”

Verse 4 is key. What motivated them? I see at least two motives:

These two ideas are interconnected. In the first place, the people of Babel wanted “face.” They wanted to be honored, recognized in some way by those around them. Here, we run into the second point.

Why do these people want “face”?

One reason is very basic –– safety. They wanted protection. People with respect, honor, or face feel a sense of security. Others will not threaten them. In fact, crowds frequently scurry for the favor of well-known people.

There are plenty of benefits to having face. Humans intuitively know this. If we do not have “face,” this indicates others do not accept us. We feel the danger that comes with isolation or feeling exclude from a certain friendship circle.

In the West, Christians have long thought the great enemy of the gospel is “works righteousness” in the sense that people think they can earn salvation via doing good works. No doubt, this flawed perspective is quite common. However, this is just one particular problem that keeps people from salvation. There are other questions besides “What must I do?”

As I’ve argued before, many people are more concerned about the questions like “Who do I know?” “Who am I?” and “Where do I belong?” Safety and “face” are found in groups, whether one’s family, friendship circle, company, or nation. One’s face and relationships form one’s sense of identity.

Even if we did not explicitly cite or retell the Babel story, it can nevertheless frame our presentation, just as it does the grand biblical narrative, cf. Gen 12:1–3. I’ll say more on that in a later post.

The point here is simply that we can start with the basic facts evidenced in the Babel story. We all tend to place too much confidence in certain relationships or in our reputation. What results?

Framed this way, we not only see the nature of the world’s problem more clearly (since sin is inherently social). In addition, we can better grasp the solution.

Christ came to gather God’s people from all nations into one human family. In this sense, conversion is not individualistic. Conversion is an exchange of identity, a change of group membership. Thus, one is not simply saved from pain and punishment.

God’s people are saved in order that we collectively would form a new people (Eph 2:15). The gospel does not simply call people out of their birth families; it calls us into a larger, human family.

What I’m saying here is more than a mere shuffling of terms. These points are overt in Scripture. However, we traditionally read the Bible selectively. For example, people are very familiar with Eph 2:1–10. However, people usually stop reading at verse 10. If you continue looking at Eph 2:11–22 is so blatantly collective that it is laughable that we ever missed it (or at least make so little of it.)

** In an upcoming post, I will briefly illustrate how one might explain this in a Chinese context.

August 1, 2014
Six Places Honor and Shame Hide in the Bible
Next Post