Relating the Biblical Covenants (in 1 picture)

What is a simple way to explain the major biblical themes and covenants? If we do not have a sound understanding of the covenants, we’ll struggle to interpret the Bible.

The graph below is a helpful tool for you and those you work with. It interrelates essential themes that shape the Bible’s plot. If you study the Bible in any depth, you discover the intricate ways biblical writers interweave allusions from other passages. For example, Abraham is presented as another “Adam” figure. The world is depicted as a type of temple.

The graph assists people to orient various motifs into one coherent mental picture. Below, you’ll see two graphs. The first prepares you for the second.

From Abraham to Moses

Israel’s story begins with God’s covenant with Abraham (Gen 12, 15, 17, 22). Without exaggeration, the Abrahamic covenant is the foundation covenant that drives the biblical story. Sadly, I find most people know it matters but don’t know exactly how.

God through Abraham and his offspring promises to bless all nations. In Gal 3:8, Paul says this covenant promise is the “gospel.” Significantly it has two parts––a means and an end. The end goal is the blessing of the nations; however, God also commits himself to a specific way of achieving that end, namely through Abraham’s seed.

Over time, Abraham’s offspring become a large nation, Israel. The foundational event in Israel’s formation is the exodus narrative. Following the exodus, God establishes the Mosaic covenant (i.e. the “Law”, “Old Covenant”). Israel continues to use circumcision as a sign of their covenant with God. Circumcision was first given to Abraham in Gen 17.

In short, God begins to administrate or fulfill the Abrahamic Covenant through the Mosaic Covenant.

When Israel is secure in the land, God makes a covenant with David (2 Sam 17; 1 Chron 17). David’s offspring shall reign forever on his throne. God will treat his offspring as a father does a son.

David’s offspring Solomon builds the Temple. Stop for a moment and ask yourself, “What is the goal of the exodus?” It is not merely freedom from slavery. Nor even the promised land. Instead, the Temple is the ultimate goal since it represents the place where God dwells with his people. This is why I’ve placed it across from Exodus on the triangle.

Tragically, Israel was unfaithful and suffer the curse of exile, promised in Deuteronomy 28–29. In effect, the exile represents Israel’s figurative death. Yet, in Ezekiel 37, God foretells of their resurrection when he sends “David”, a king who will set things right.

From Old to New

The triangle above not only represents Israel’s history; it foreshadows the reality to come in the new covenant (Jer 31:31–34; Ezek 36). Therefore, notice in the graph below both the Old and New Covenant essentially are contained within one larger, single triangle that begins with Abraham. This signals a key idea:

The Old and New Covenant are God’s means of administrating or fulfilling the Abrahamic Covenant.

Biblical writers often characterize Israel’s return from exile as a “new exodus”, a “redemption” from Babylon, a figurative “Egypt.” Though many exiles had returned to their land, the promises of redemption had not yet been fulfilled. In this sense, Israel was still in “exile” awaiting God to send “David”, the offspring to rescue Israel from oppression. At that time, God would also send his Spirit.

Christ is the promised Davidic king. As Israel’s anointed representative, he becomes a curse through his death on the cross. His resurrection declares him to be God’s victorious king who redeems His people from exilic death. His blood inaugurates the new covenant and purified a new temple. That is, God’s temple consists of all who are “in Christ.”

The church consists of people from all nations. God sends his Spirit on all who give allegiance to Christ, whether Jew or Gentile. Baptism is the new covenant sign. With the arrival of the King, the NT writers also use OT imagery to speak of the new reality God has brought about. In Christ, we are a kingdom of priests.

In the beginning, God created the world to become a “temple”, a holy place where he would dwell with his humanity, those made to bear his image. Observe that the larger triangle envelopes the smaller triangle. Israel’s physical temple was a mere pointer to God’s larger purpose of making the whole world to serve as his temple. That goal is ultimately achieved when God creates the new heavens and new earth. In this way, the original calling of Abraham and creation is fulfilled. God through Abraham undoes the curse of Adam and blesses the entire world.

The covenant theme provides the framework for grasping the countless passages of Scripture. In some way, all or nearly all major teachings stem from some idea linked to covenant. What happens if we overlook this point? Inevitably, we will impose our own supposed structure the text in an effect to tie it all together. This is problematic on multiple levels.

I hope you find the graph helpful. If you have any thoughts or suggestions, leave a comment.

Below I’ve included the graphs in Chinese: 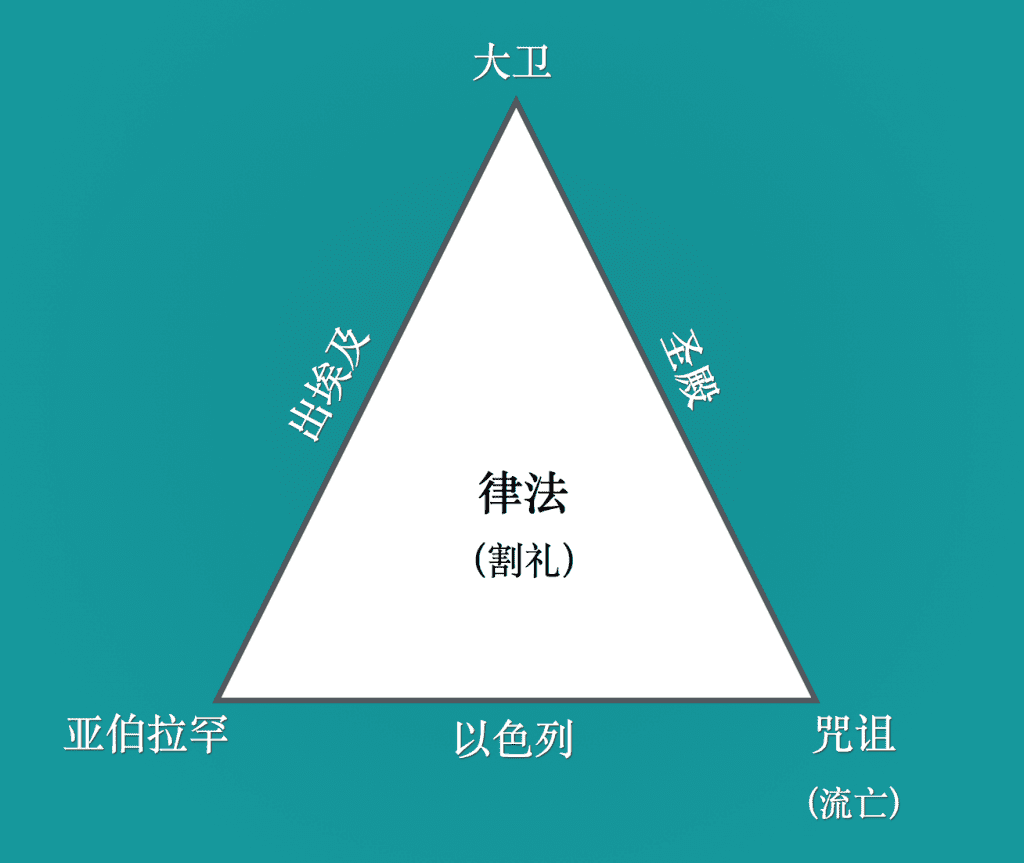 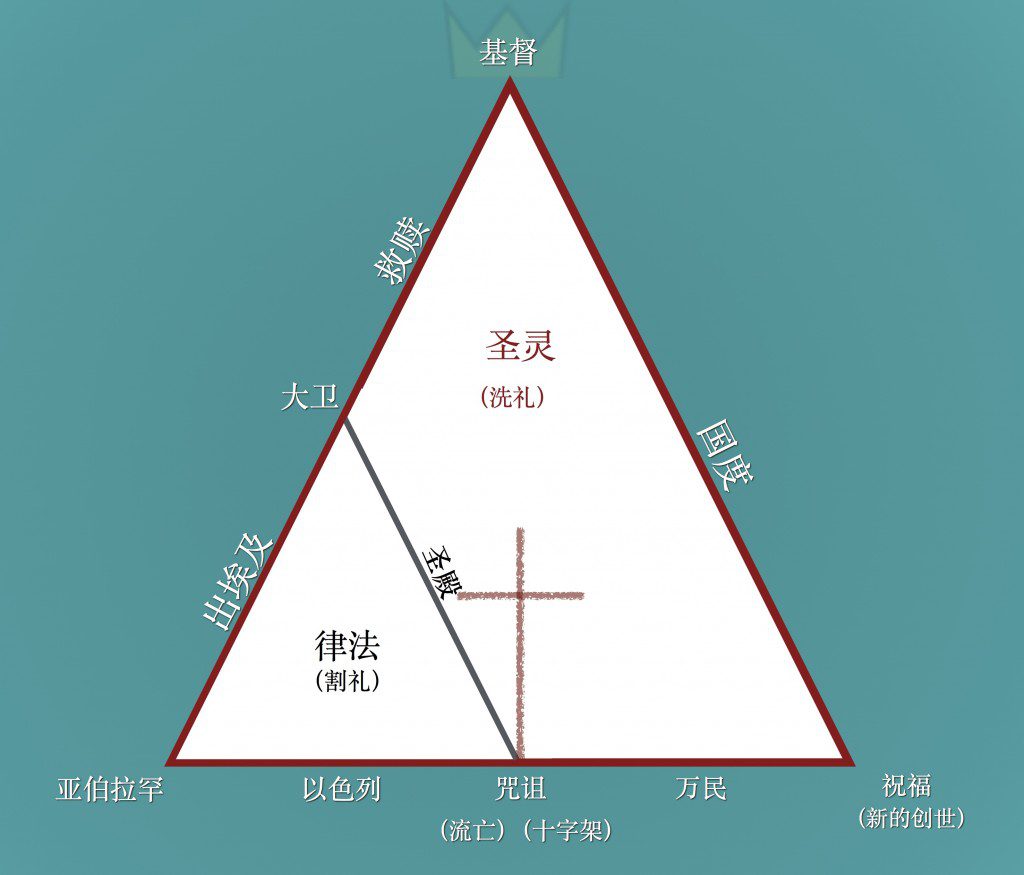 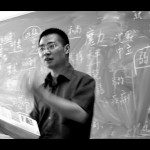 February 7, 2017 Educated Chinese Christians and Wang Mingdao's Popular Theology
Recent Comments
0 | Leave a Comment
"Thank you for this article. With all due respect, I am not convinced. Why? First, ..."
Salvatore Anthony Luiso When does masculinity and femininity become ..."
"A very interesting webinar! What application do you use to record your videos? I found ..."
Free Cheats “Confucian Shame in Christian Thinking” webinar ..."
"Thank you for this article. I suggest you mention that the authors of the two ..."
Salvatore Anthony Luiso Defining masculinity and femininity biblically is ..."
"Knowing that God is your father has an amazing effect on one's self-esteem while inspiring ..."
Karen Silver Jesus experienced shame, not low self-esteem
Browse Our Archives
get the latest updates from
Jackson Wu
and the Patheos
Evangelical
Channel
POPULAR AT PATHEOS Evangelical
1