The subtle syncretism of Andy Stanley against “theological correctness”

It kills me when well-intended pastors, like Andy Stanley, unwittingly do damage to the church because they do not give more careful thought to their words. In our age of YouTube and social media, his remarks gain traction among missionaries. And that’s why we can’t overlook the significant problems with his comments.

At a recent conference on church leadership, Andy Stanley told attendees that church unity is more important than “theological correctness.” His play on words gives him a rhetorical advantage, making it difficult for people to challenge him.

On the one hand, who wants to defend “theological correctness”? The term has a negative ring, although it simply advocates for correct theology. What is the problem with good theology? On the other hand, Stanley creates a false dilemma, which is a logical fallacy. Why must we choose between church unity and sound theology? The underlying assumption that we must pick one option is a dangerous one.

I know a kid asks his mom questions like, “Can I have one piece of candy or two pieces?” However, his mom never said he could have even one piece of candy! Whether intentional or not, false dilemmas manipulate people’s thinking.

Such false dichotomies are widespread among missionaries. Should we be “practical” or “theological”? Should we preach the gospel or serve people by meeting social needs? Should someone get theological training, or should they do ministry? This habit of framing issues is as insidious as it is pervasive.

The Subtle Influence of Silence

He commits another common fallacy––arguing from silence. The Christian Post summarizes Stanley’s argument from John 17 saying, “he found it significant that Jesus prayed for the disciples to be one, rather than for other things, including good health and being theologically accurate.”

The fact Jesus did not pray on this occasion for X, Y, and Z does not indicate he minimizes their importance nor does it mean he could not have prayed for such things at other times. Framing Jesus’ prayer in this way is misleading. Stanley’s claim is based on what Jesus does not say, not what he does say. No one can say everything all the time. Just imagine if people did that to us, interjecting their messages into our mouths based on what we don’t say on some occasion.

Stanley gives a few examples of “theological correctness.” He asks,

By contrast, “Stanley spoke of how he came to believe that believing in Jesus Christ was more important than theological arguments like how communion should be served or if babies should be baptized.”

Stanley attempts to distinguish primary and secondary issues. I appreciate that. Yet, in the process, he seems to throw the proverbial baby out with the bath water. Accordingly, listeners are tempted to villainize anything “theological” that might undermine unity.

Stanley defends his claim by making a strawman argument. For example, he rails against “theological correctness” by saying, “we will discover that when it comes to theology, we were all wrong about something.” Who in the world doubts this?

Unless you’re the Pope, people readily acknowledge that they don’t have it all figured out. Stanley argues against a strawman. No one puts it better than N.T. Wright, who says,

I used to tell my students that at least 20 percent of what I was telling them was wrong, but I didn’t know which 20 percent it was; I make many mistakes in life, in relationships, and in work, and I don’t expect to be free of them in my thinking. (Justification: God’s Plan and Paul’s Vision, p. 20)

Observe the how many logical fallacies plague Stanley’s message. His talk reminds us why Christians need to learn critical thinking. Logic is not about being “academic.” It’s about protecting the church and our mission.

Stanley also settles for superficial readings of Scripture. He appeals to Acts 15, where the Jerusalem Council determined that Gentiles need not keep the Mosaic Law. He then claims the early church was willing to make “theological and cultural concessions for the sake of unity and so should you and so should I.”

Do you catch the magnitude of what Stanley just claimed? To make a “theological concession” implies we permit someone to do or believe something that we think is unbiblical. In the case of Acts 15, he suggests the Jerusalem leaders thought Gentiles should keep the Law, but they nevertheless would tolerate the Gentile’s indifference to the Law.

What?! No, the Jerusalem church leaders had not given deep thought to the subject. Upon reflection, they changed their minds concerning what they previously had assumed. That’s not a “theological concession” for the sake of unity.

What is at the root of Stanley’s error? His understanding of unity lacks a foundation. Simply saying “Jesus” is too ambiguous and unhelpful. People use Jesus’ name to make all sorts of claims. He uncritically accepts the broader culture’s vision of unity. In reaction to countless petty disputes, Stanley and millions in American culture seek unity for unity’s sake. But this is problematic.

Christian unity is grounded in practice and theology. Of course, no one will agree on all points (cf. Rom 14). Yet, that does not undermine the theological roots of church unity.

Paul expresses his longing for unity in Ephesians, where he writes of the church’s being built up

…until we all attain to the unity of the faith and of the knowledge of the Son of God, to mature manhood, to the measure of the stature of the fullness of Christ, so that we may no longer be children, tossed to and fro by the waves and carried about by every wind of doctrine, by human cunning, by craftiness in deceitful schemes. Rather, speaking the truth in love, we are to grow up in every way into him who is the head, into Christ. (4:13–15)

Many people––then and now––will certainly use doctrine to divide the church. But Paul’s solution is not minimizing theology. Rather, we speak the truth in love when we guard the church against the craftiness of false teaching. 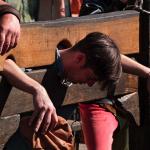 May 3, 2018 Clothing the Grand Biblical Story with Honor and Shame
Recent Comments
0 | Leave a Comment
"Comment cancelled."
Tony What’s your political denomination?
"Thank you....Looking forward to the follow up posts."
RC Masih What is “Re-kin-ciliation”?
"Thank you! I see it's up"
Andrew My newest book is coming soon!
"Great point, cheers."
Josh Re-kin-ciliation Does Not Begin with Brokenness
Browse Our Archives
Related posts from Jackson Wu