Honor and Shame in the Trump Impeachment

Honor and Shame in the Trump Impeachment December 18, 2019 Jackson Wu

People often wonder about the practical importance of honor and shame. For many Westerners, honor and shame seem either like relics of the past or perhaps nuggets of insight for cross-cultural workers. This misunderstanding is largely due the impression that honor and shame exist mainly where the words “honor” and “shame” are explicitly used. Sometime, confusion stems from correct but partial understandings of these concepts.

In this respect, the Trump impeachment inquiry is a helpful case study. It highlights several dimensions of honor and shame as well as their practical significance. In this article, I will underscore multiple aspects of the Trump-Ukraine scandal. These points are just a few ways that honor and shame shape the relevant events and dynamics.

Why a White House Visit?

At the heart of the inquiry is the question of whether Trump solicited a bribe (a type of quid pro quo) from the President Zelensky of Ukraine. Beside security assistance (e.g., javelin missiles), Ukraine also wanted a White House visit. According to witnesses and much reporting, a White House visit by President Zelensky was conditioned on Ukraine investigating Joe Biden’s son and the potential interference into the US 2016 election.

A little context is helpful. Already in Spring 2019, neither President Trump nor Vice-President Pence attended President Zelensky’s inauguration, although Ukraine worked hard to ensure one of them would be present. Instead, Trump sent a lower-level (less prestigious) delegation.

Most people can naturally understand why Ukraine would want military assistance. Russia invaded their country and were engaged in war against Ukraine. But why did President Zelensky regard a White House visit to be a major priority? What’s so important about visiting the White House? After all, numerous professional athletes recently have turned down opportunities to visit the White House.

At least two reasons are noteworthy.

Receiving a White House visit is a public honor. It symbolically demonstrates support from the United States. Such support gives Zelensky credibility among his people and within his government. This is important for Zelensky to accomplish the goals of his administration.

(2) A White House visit would impact Russia’s perception of US support.

As a consequence, Russia would be emboldened to become more aggressive in their war against Ukraine. The public show of support further gives Ukraine’s leverage to negotiate a peace resolution with Russia.

Why Use Public Declarations?

Donald Trump was not content that Ukraine investigate the Bidens; he insisted that President Zelensky make a public declaration that Ukraine had begun an investigation. If eradicating corruption were the goal, there is no need to make a public statement about it. In fact, countless investigations are conducted in secret so as to prevent wrongdoers from hiding evidence.

The only thing achieved by a public announcement would be to embarrass Joe Biden, Trump’s political rival. After all, the mere pronouncement of an investigation does not indicate that the Bidens had done anything wrong. A public declaration simply raises suspicions. It would sully the Bidens’ reputation.

In short, a public declaration would effectively serve to ignite a political shame campaign. Disparaging an opponent’s name practically seeks to raise one’s own social standing. In a sense, this is what any middle school boy knows when they insult a peer. It’s also what we see when Trump name calls those who testify against him or seek his impeachment.

Managing one’s reputation is a central concern to any politician. This desire could be practical or merely pride. These dynamics did not escape Ambassador Sondland. He knew what appealed to Trump. Therefore, he gave peculiar advice to former Ambassador Yovanovitch, who felt that her own job was at risk since she did not have President Trump’s confidence. Sondland counseled Ambassador Yovanovitch to “send out a tweet, praise the president” if she wanted to save her job.

Honor and shame inform Trump’s purpose and process. This entire ordeal concerns Trump’s ambition for win public praise and position. Casting political shame upon his opponents is a means to that end. The race for face has consequences for both nations. We’ve already considered Ukraine, but what about the United States?

Trump’s desire to be adored and accepted by the populous threatens the reputation of the United States. And let’s not forget… reputation is the currency of political capital. Countries and individuals make decisions about how they will relate to us based on our reputation, whether we have credibility. Are we trustworthy to keep our word?

Trump’s solicitation of a bribe undercuts any respect granted to the United States by other nations. People naturally begin to wonder whether America is corrupt like various other countries. A nation’s reputation will affect others’ willingness to form partnerships and pursue strategic goals.

Finally, Trump’s defenders repeatedly argue that President Zelensky felt no pressure from Trump. They appeal to the Zelensky’s statement from the Oval office, where he supposedly denied feeling pressure. (I say “supposedly” because one has to ask whether it’s truly a denial if a person isn’t entirely truthful.)

In effect, the United States and Ukraine have a de facto patron-client relationship. One of the first obligations of any client throughout history is to honor the patron. With Trump under political pressure and given his already showing a willingness to withhold military aid, Zelensky knew the potential ramifications of his words.

If he contradicted President Trump and admitted to feeling pressured, Zelensky would have brought shame on Trump. Causing Trump to lose face would certainly undermine US support for Ukraine, resulting in long-term deleterious effects on Ukraine.

Whatever your political persuasion, at least two things are clear. Honor and shame lie at the heart of all the hubbub surrounding Trump and Ukraine. Furthermore, at stake now is whether political leaders will honor their commitment to the Constitution or whether they will shamelessly put their party before the country.

Before posting comments, please read: This post is about how honor and shame influence some dynamics underlying the Trump-Ukraine controversy. The comments section is not a forum for partisan banter. 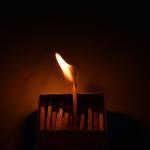 December 23, 2019 Does God Have “One Child” or a “Unique Child"?
Recent Comments
0 | Leave a Comment
"What claptrap! The Declaration of Independence discusses in excruciating detail the individual rights and characteristics ..."
Krumhorn How Individualism Spreads Racism
"Very well done! The US is the least racist nation on the planet."
Roger McKinney Talking about racism is American privilege
"Hi Jackson Wu. No, I do not disagree with reactions to George's death. He was ..."
Noel My Unfaithfulness in a Kansas City ..."
"Noel, George Floyd's criminal record is irrelevant to the discussion about whether the cops responded ..."
Jackson Wu My Unfaithfulness in a Kansas City ..."
Browse Our Archives
Follow Us!

Hebrews: 5 Books Every Pastor Should...
Crux Sola: Formed by Scripture to Live like Christ
Books by This Author Books by Jackson Wu

Anti-life Roberts betrays God-given right to life and...
In a somewhat shocking decision, (one somewhat gets used to "Obama's Judge"...
view all Evangelical blogs
What Are Your Thoughts?leave a comment
Copyright 2008-2020, Patheos. All rights reserved.